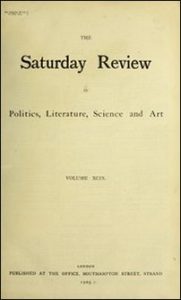 An article  in the Saturday Review for 9 June 1888)
which reviews seven other novels by various hands;
probably written by the Editor, Walter Hcrries Pollock (1850-1926)

There is a good deal in a title. Could there be a much less attractive
title than ‘Plain Tales from the Hills’ ? Residents in British India and
subscribers to the Civil and Military Gazette may know what it means,
and hasten to get hold of the book accordingly; but to the untravelled
inhabitants of London and the United Kingdom generally it would
seem almost as hopeful to undertake the perusal of a volume entitled
Straight Talks from Beulah. We should suggest to Mr. Kipling to change
the name of his book to The Other Man; and Other Stories, not because
‘The Other Man’ is his best plain tale, which it is not, but because
it would look well on the bookstalls. There are forty plain tales, of
which twenty-eight have appeared separately in a newspaper, and the
other twelve are, in the modest words of the author, ‘more or less
new’. Each tale is extremely short, the average length being just
under seven pages. Nevertheless, for the profitable disposal of odds
and ends of time or for a cross-country journey in stopping trains on
Sunday it would be hard to find better reading. Mr. Kipling knows
and appreciates the English in India, and is a born story-teller and a
man of humour into the bargain. He is also singularly versatile, and
equally at home in humour and pathos. ‘Thrown Away’, a story of a
commonplace youth who killed himself in despair merely for want of
proper training, is little short of genuine tragedy, and is full of a grim
humour which is decidedly telling. ‘The Three Musketeers’ and ‘A
Friend’s Friend’ are farce of a high order. Four of the stories—and four
of the best—concern the British private in regiments stationed in India.
An inimitable Irishman appears in each of them, and relates his ex-
periences with a delightful freshness and good humour. The following
extract occurs in an astonishing story of the taking of a town by
Burmese Dacoits.

The British detachment could not discover where the Dacoits abode;
but evenshually we puckarowcd wan man. ‘Trate him tinderly,’ sez the
Lift’nint. So I tuk him away into the jungle, wid the Burmese Interprut’r
an’ my clanin’-rod. Sez I to the man: ‘My paceful squireen,’ sez I,
‘you shquot on your hunkers an’ dimonstrate to my frind here, where
your frinds are whan they’re at home.’

It has been explained just before that: ‘Tis only a dah and a Snider that
makes a dacoit. Widout thim he’s a paceful cultivator, an’ felony for
to shoot.’

Another remarkable military story is ‘The Madness of Private
Ortheris’. Ortheris goes out shooting with his friend Mulvaney and
the author … [26 lines, mainly quotations from the story, with
synopsis] . . . The military stories happen to have been dwelt on here,
but there are many tales of civilians, and indeed of natives, that are
really quite as good. The reader should not omit to peruse the head-
notes of the stories, especially when they are in verse. It seems probable
that a considerable proportion are Mr. Kipling’s own. One advantage
in the extreme shortness of the stories is that, as they are read in a few
minutes, their incidents are easily forgotten, and they may be read
again with fresh pleasure after a short interval. For this reason, and
because it is small, the book is one to buy, and not merely to get from
the library.