This poem (ORG No. 598) was first published in seventeen lines as a heading to “In the Rukh” in Many Inventions (1893). It was enlarged to twenty-six lines for Songs from Books (1912) and later verse collections: Inclusive Verse, Definitive Verse, The Sussex Edition and The Burwash Edition.

It should not be confused with the lines at the head of Chapter XI of The Light that Failed, or the fourth of the “Epitaphs of the War”.

Although “In the Rukh” is about Mowgli in his later years as a forest ranger, it was the first story Kipling wrote about him. This was the first of Kipling’s poems about his upbringing by Mother Wolf, hence his later interest in extending the poem after the other Mowgli stories had been written. In Many Inventions the first line has nothing to rhyme with, but in Songs from Books it becomes the fourth line and rhymes with the third. It is possible that there was a draft of the full poem which was tailored to fit onto the page. There are also small variations between the two, e.g. ‘blackbuck‘ for ‘sambhur‘.

[lines 11-14] The Only Son has the keen sight, hearing and sense of smell of a wolf. See “Kaa’s Hunting” The Jungle Book p. 46 line 9: ‘Eyes that can see in the dark; ears that can hear the winds in their lairs…. these things are the marks of our brothers.‘

[line 22] Sambhur a large Indian deer, genus rusa. The best known of the five species within this genus, 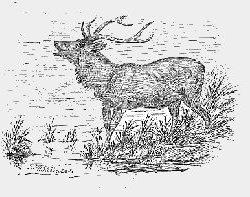