This poem was first published in The Times and in various Australian newspapers on November 12th 1934. It is collected in:

It has been reprinted frequently under a number of titles, including:

The Shrine of Remembrance was built between July 1928 and November 1934 in remembrance of the 114,000 men and women of Victoria who served and those who died in the Great War of 1914-1918. Of the 89,100 who served overseas, 19,000 did not return. The Shrine now also serves as a memorial to those who have served in wars and peacekeeping duties since.

The inspiration for the exterior of the building came from the tomb of Mausolus at Halicarnassus in Asia Minor. This was one of the Seven Wonders of the ancient world (and gives us the word “mausoleum”).

Sunk into the centre of the Sanctuary floor is the Stone of Remembrance bearing the inscription (from St. John’s Gospel Ch. 15 v. 13).
GREATER LOVE HATH NO MAN 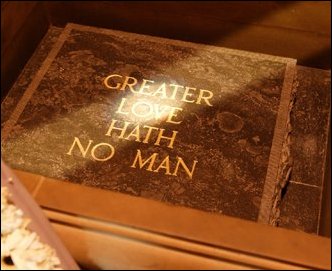 A ray of sunlight passes through an aperture in the roof and falls onto the Stone of Remembrance over the word “LOVE” at precisely 11.00 am on 11th November each year.

This is the moment when the Armistice was signed in 1918 marking the end of hostilities in the First World War. The ray is now reproduced every half hour using electric light to allow all visitors to the Shrine to experience it.

Prince Henry, Duke of Gloucester, officially opened the Shrine before a crowd of 300,000 people on Remembrance Day, Sunday 11th November 1934.
Sir Stanley Argyle, the Premier of Victoria, had asked Kipling whether he would be kind enough to compose some verses to celebrate the dedication of the Shrine. The Times for 15th January 1934 records that ‘The Victorian Ministry asked for Mr. Kipling’s services because of the Imperial spirit manifested in his poems.’
Kipling complied, and his Ode was read at the close of the official proceedings.

Kipling’s Ode, which was read on Sunday
at the ceremony of the dedication of the
Shrine of Remembrance, was written by him
as a gift to the State, the Premier (Sir Stanley
Argyle) explained last night. Kipling, the Premier
said, had taken great pains to learn as much as
possible about the Shrine. He had written the last
two lines of the original text, however, under the
impression that the ray of light fell on the Rock
of Remembrance on Anzac Day. When the error
was pointed out to him, he had sent two new lines
by cable within 24 hours.

Sir Stanley Argyle added that he proposed to ask
the Trustees of the Shrine to have the ode cast
in bronze and placed in the Shrine.

Kipling’s misunderstanding over the date is not surprising. In Australia, members of the Armed Forces, past and present, dead and living, are more widely remembered on Anzac Day, 25th April, than on 11th November. 25th April is the anniversary of the landing at Gallipoli – see Notes to the Ode.

The Ode was duly cast in bronze and placed in the Shrine. It is not easy to find, although the frame is about 2 metres tall by a metre wide.

Not all the guides at the Shrine can direct you. It hangs at the first turn of the north-west stair from Sanctuary level to the upper gallery.

Kipling and the Australian dead

In 1934 Kipling was asked to write an ode for the Melbourne Shrine of Remembrance. The invitation came from the Victorian Agent General in London.

Although ill and greatly troubled by a duodenal ulcer, Kipling accepted the invitation because the cause was dear to him. John, his only son, had been killed in World War I. His body had not been found so his grieving parents had no grave to visit. Kipling had worked tirelessly for War Graves Commissions from that time on and public memorials to the dead were personally important to him. With memories of John fresh in his mind, it’s not surprising that this ode was hard for him to write. He
worked on it for nine months, an unusually long time for a man who normally composed very rapidly.

The poem is not only a tribute to those whose lives had been cut short by war. It is also specifically appropriate to the Australian dead. Kipling writes, in words reminiscent of the national anthem, of ‘great waters girdling’ the land; of Gallipoli as ‘a beach / Which will outlive Troy’s tale when Time is old’; and of the brave and heedless men who thronged to the ‘Western War’ and lost their lives there. The obsession with sport gets a passing mention (‘as cities throng to watch a game’) and Australians are seen by the poet as people of ‘stubborn pride’, living in a ‘desired land’. It’s the only poem called an ‘ode’ that Kipling ever published and the words, on a metal panel within the shrine, end with a moving image of the Australian sun lighting up the memorial in the pages of history:

Having revealed their nation in earth’s sight
So long as sacrifice and honour stand,
And their own sun at the hushed hour shall light
The shrine of these their dead!

the crest no man might hold The Turks occupied the ridges overlooking the beach, and were never dislodged from their positions despite repeated fierce and costly attacks over the next nine months.

line 3 gave their name for ever to a beach Anzac Cove where the landing took place.

line 4 Troy’s tale Kipling likens the Australian soldiers to the heroes of Homer’s Iliad. The site of Troy is just across the Dardanelles from Gallipoli.

line 2 Merciless riders whom Megiddo sent forth The Australian Light Horse in Palestine. After the Turkish line had been broken at the Battle of Megiddo, the Australian cavalry pursued and surrounded the retreating enemy.

line 4 the drove-roads a reminiscence of the roads in Australia where many of the horsemen would have worked driving mobs of cattle.

lines 1 & 2 the last March flood of western war In March 1918 the Germans launched their last great offensive on the Western Front. In a month they advanced over forty miles and occupied the town of Villers-Bretonneux, within sight of the vital railway centre of Amiens.

line 3 Stormed through the night from Amiens On 24/25 April the Australian 13th and 15th Brigades made a brilliant pincer attack by night and recaptured Villers-Bretonneux. This marked the furthest point of the German advance.

line 4 At their glad cost Australian casualties in the operation were some 2,500 men killed or wounded.

line 5 at the hushed hour Two minutes’ silence is often observed throughout the world at 11 am on Remembrance Day, 11th November. This is the time at which a ray of sunlight falls on the Stone of Remembrance in the centre of the Shrine.