[Page 419 lines 7-8] experience of companions A Lady’s ‘Companion’ was a woman paid to live with another, to accompany attend and help her. She would need to be socially acceptable to her employer. Companions and governesses were often the daughters of clergymen, who counted as gentry, but could leave their children no money. 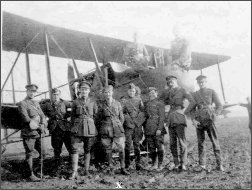 [Page 421 line 28] Flying Corps Before the creation of the Royal Air Force, the Royal Navy and the Army had separate flying forces. That attached to the army was called the Royal Flying Corps (right).

[Page 421 line 29] a cardigan waistcoat a warm woollen waistcoat, buttoned at the front.

[Page 421 line 32] Miss Fowler told the men …that those who could join the army had better do so In early 1915, when this was written, well-to-do households all over Britain, like Kipling’s, were sending their male servants off to war, cutting back on luxuries, and reducing their establishments.

[Page 422 line 14] the chances are he won’t have long to draw it families – like the Kiplings – knew already that young men joining up might well be going to their deaths.

[Page 423 line 10] Taubes German monoplanes. Monoplanes were single-winged aircraft with the potential for speed, but were less stable than ‘bi-planes’ which had double wings, like a box-kite.

[Page 423 line 10] Zeppelins German dirigible air-ships (right). One of them made the first aerial bombardment of London in 1916.

[Page 423 lines 14-16] Wynn, who had finished ‘rolling’ … and had gone on from a ‘taxi’ to a machine more or less his own Mary has misunderstood the jargon. The usual progression was from ‘rolling’ or ‘taxi-ing’ on the ground, to flying with an instructor, and finally ‘solos’. Aircraft were in short supply; it is unlikely that Wynn would have been allocated a personal machine. [L.L.]

[Page 423 line 21] bath-chair a chair with wheels for the disabled or elderly, designed to be pulled along by a handle or pushed by a bar from behind.

[Page 424 line 17] glanced at her The Nash’s and Pall Mall version has: ‘glanced at her from under eyebrows which had refused to whiten all these years.’

[Page 425 line 21] his propellers in fact he was more likely to be flying a single engined plane with a single propeller.

[Page 426 line 24] the middle-aged feel it more Kipling was fifty and his wife fifty-three.

[Page 426 line 31] Salisbury The Central Flying School was then at Netheravon in Wiltshire, on the edge of Salisbury plain. [L.L.]

[Page 427 line 15] my bar ‘bar’ was a contraction of ‘barometer’, indicating height above the ground. In those days, the earliest altimeters were small aneroid barometers, calibrated in feet, rather than in inches of mercury or millibars. [A.W.]

[Page 428 line 22] Belgian refugees a large number of them took refuge in England when their country was invaded by the German army in 1914. There were many reports at that time of atrocities against civilians.

[Page 429 lines 5 & 6] tapping the palm of one hand with the ringed third finger of the other this sentence puzzled the ORG Editors: ‘If the ring was on the left third finger it meant that she had been engaged to a man who had died – but if on the same finger of the right hand, it would have had no special meaning.’

[Page 430 line 28] glebe land assigned to the clergy (in this case the Rector) as part of their ‘living’.

[Page 431, lines 1-32] When making this detailed inventory of a young man’s possessions, so expressive of his interests and enthusiasms, Kipling must have been mindful of what it would be like to have to deal with the contents of his son John’s room at Bateman’s, were he to be killed.

[Page 431 lines 4 and 5] Motor Cyclist .. Light Car Journals of the day for early enthusiasts for cars and motor-cycles.

[Page 431 line 14] Assegai spear used by Zulu and other warriors.

[Page 431 line 16] O.T.C. Officers Training Corps to provide basic military training, drill, fieldcraft and shooting, established in many schools of the day attended by the middle classes. Similar corps exist in Britain to this day. See also “The Flag of their Country” (Stalky & Co.). 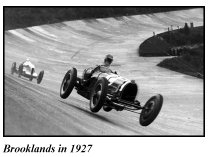 [Page 431 line 29] Brooklands the fast banked motor-racing circuit at Weybridge in Surrey, the first in Britain.

[Page 433 line 10] a bomb The Times of 20 Jan 1915 reported Zeppelin raids in which a youth was killed and his small sister injured. In a later report (22 Feb 1915) a single bomb dropped by a plane over Colchester partly wrecked the room in which a baby lay asleep, also destroying a garden shed. The bombs of the period were small enough to be carried on the pilot’s person and dropped by hand. [L.L.]

[Page 433 line 14] shut off its engine Again, Mary gets it wrong. Few aircraft at that time had self-starters, so a pilot would be unlikely to switch off in mid-air; but if the engine (there would only be one) failed, to jettison his bombs would improve his chances of surviving the ensuing crash. This would have made comparatively little noise, the airframes of the period being made of wire, canvas and wood. [L.L.]
Alastair Wilson points out that it is possible in principle to restart an aircraft engine by simply diving and letting the engine into gear, rather as one can ‘push start’ a motor car, provided it doesn’t have an automatic gearbox. [A.J.W.]

[Page 434 line 15 and page 435 line 2] that accident at the Royal Oak…I can rely on you … The Doctor is clearly giving Mary a version of the story to pass on to Miss Fowler, which they both know to be untrue.

[Page 436 line 1] she heard The Nash’s and Pall Mall version has: ‘it seemed to her that she heard’.

[Page 436 line 7] fusee in this case a special sort of match with a large head, which will not blow out in a wind.

[Page 436 line 29] there was no doubt as to his nationality Mary was in no doubt that he was a German airman.

[Page 437 line 16] after reading certain Belgian reports together There had been reports in the British press of atrocities by the German army against women and children during the invasion of Belgium. Miss Fowler and Mary had decided to be ready for anything.

[Page 437 line 19] flat-nosed bullets Flat nosed bullets caused horrendous wounds, and were indeed outlawed for use in war by international agreement under the Hague Convention of 1899. This had not deterred Miss Fowler, who did not see Germans as ‘civilised enemies’.

[Page 438 line 6] Che me rends He is trying to say ‘Je me rends’, which means ‘I surrender’ in French, but his guttural accent suggests that he is not a Frenchman. Mary clearly thinks he is a German.

[Page 438 line 14] ‘Nein … ich haben der todt Kinder gesehn’. She is summoning up what little broken German she has to say ‘No … I have seen the dead child’.

A contemporary propaganda poster (right) suggested that German nurses refused help to wounded British prisoners, deliberately pouring water on the ground rather than give it to them. [L.L.]

[Page 440 line 6] a man … would leave everything to fetch help during a Naval Air service raid on Freidrichshaven in November 1914, a British pilot who had been shot down was injured by angry citizens. He was taken to hospital by the German military, and given every care. [L.L.]

[Page 440 line 19] pavior One who lays paving stones, ramming them down so that they settle firmly.

©The Kipling Society 2008 All rights reserved