This verse “The wolf-cub at even” is also used as a heading for Chapters XII and XIX of The Naulahka. The poem “Hunting Song of the Seeonee Pack” which prefaces the story Kaa’s Hunting’ in The Jungle Book (1894), shares the same imagery of wolves and their cubs.

The novel’s recurrent images of smoke, fog, and the moon, also inform this verse. Just as the moon, a symbol in The Light that Failed of all things female, ‘swept the smoke wreaths away’ in the poem, so the wind ‘that had opened the fog, drove across Dick’s face the black smoke of a river steamer’ (page 56 para 2) to reveal the adult Maisie standing there; smoke or fog being symbols of hiding and revealing. More obscurely, perhaps, the contrast between the predatory wolf-cub and its prey could be said to anticipate Dick and Maisie’s emotional conflicts. Torpenhow’s criticism of Dick extends the symbolic significance:

‘You might as well call a young wolf a lion and expect him to take the compliment in exchange for a shin-bone. Dick’s soul is in the bank. He’s working for cash’.

[Page 45, line 20] lay-figure a jointed mannikin used as a substitute for a live model.

[Page 47, line 22] epicene strictly means having the characteristics of both sexes; used here in an uncomplimentary manner.

[Page 47, line 27] promenading among the toy-shops In the 19th and early 20th centuries, London’s street arcades, pedestrian streets where no vehicles were allowed, gained great popularity as high quality shopping centres for the well-to-do, mainly because they were free of the mud and debris created in the main streets by horse-drawn traffic. One such was Lowther Arcade, the subject of this remark, almost directly opposite the upper end of Villiers Street where Kipling lived, and devoted to toy shops.

[Page 48, line 17] the Nilghai throughout the novel this character is identified only by this nickname. The Nilghai is a bull-like antelope, the largest in India, thus the name connotes size and strength. The character may be based on Henri de Blowitz, a famous Times correspondent, whom Kipling had met at the Press Club.

[Page 48, line 31] “His Last Shot” A picture by A R Caton Woodville (1856-1927) a notable American war artist. Kipling may well have drawn inspiration for Dick’s description of ‘His Last Shot’ from Woodville’s first version of 1885. This painting, and the portrait of the “Negroid-Jewish-Cuban” woman in Chapter VIII, are key images in the novel’s treatment of its central theme of art and artists. (see the Introduction) 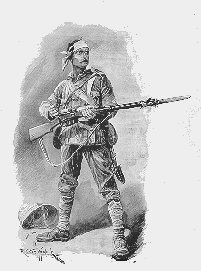 Caton Woodville later painted an illustration for the sheet music cover of Kipling’s “The Absent Minded Beggar” (right) published during the South African War of 1899-1902.

[Page 48, line 33] El Maghrib A fictional locality in this context. In ancient times, ‘Maghrib’ was an area of North Africa ruled by the Zeirid dynasty, and Kipling may have taken the name from this source.

[Page 50, line 8] mahl-stick a stick with a soft leather or padded head used to support painting on an upright canvas (from the Dutch maalstok, meaning ‘painting stick’).

[Page 51, line 17] Why the Dickenson this pun on the magazine’s name is derived from the phrase ‘what the dickens’ (Shakespeare’s Merry Wives of Windsor Act III scene ii). ‘Dickens’ was an Elizabethan and Jacobean expression for, or alliterative substitute for, ‘devil’.

[Page 53, line 18] trouble in the Balkans During the 19th century the peoples of south-eastern Europe (‘the Balkans’) began to emerge from Turkish domination and organise themselves into new nation-states. This was accompanied by much conflict, and this phrase became familiar in British newspapers.

[Page 54, line 5] chromo-litholeo-margarine-fake an invented phrase. Chromo lithography was an early two-colour printing process. Today’s margarine is very different from the original, invented as a substitute for butter by the Frenchman Hippolyte Mege-Mouriez in about 1870. For many people in Kipling’s day this substance, made from beef-fat, was barely palatable. Thus the expression can be taken to mean a concocted, bogus, and unpalatable piece of work.

[Page 54, line 14] a second Detaille and a third-hand Mesonnier Jean-Baptiste Edouard Detaille(1848-1912) was a French painter of military subjects, noted for his exactitude of detail. He was a pupil of another painter, Jean-Louis Ernest Mesonnier (1815-1891), distinguished for the finish and technical assurance of his work, and scrupulous observation of nature. He was the originator of the genre of microscopic painting in oils. This is a further example of Kipling’s fascination with technical processes.

[Page 55, line 7] the Cataclysm another fictitious periodical name, possibly a remote reference to ‘The Thunderer’, a popular name for The Times.

[Page 56, line 17] He was blinded for a moment There is a conscious echoing of imagery here, at the significant moment of meeting Maisie again. See also page 7, lines 9-11. (see the Introduction).

[Page 56, line 18] Maisie It is generally believed that ‘Maisie’ was based on Florence Garrard, whom Kipling loved for over ten years from the age of fourteen, and who, in the words of Jad Adams in his 2005 biography (Haus Publishing 2005 page 21): ‘would … inform his attitude to women for the rest of his life’. Charles Carrington (page 41) describes her as:

a little older than Rudyard, a straight slender girl with a beauutiful ivory-pale face and a cloud of dark hair, but badly brought up in continental hotels and very ill-educated.

[Page 57, line 15] the black north across the Park this refers to the the neighbourhood north of Hyde Park in central London.

[Page 57, line 30] the Slade a famous London art school named after Felix Slade (1790-1868), the English art collector and patron. It is now part of London University

[Page 57, line 31] pepper-potted ‘pepper-potting’ was the name given by art students to the copying of National Gallery pictures, from the shape of its two flanking towers.

[Page 58, line 30] out of drawing incorrectly drawn, implying that Nilghai’s face was lopsided. A casual remark by Dick, in which Kipling suggests his unthinking cruelty, his honesty and his inability to think in other than artistic terms.

[Page 59, line 5] as much room to turn in implied criticism of Nilghai’s verbose style.

[Page 59, line 18] cenotaphed an unusual verb from a familiar noun, and an example of Kipling’s willingness to coin words. A cenotaph is a war memorial, so the word may perhaps be read as ‘buried’.

[Page 59, lines 21-22] ‘It’s a clumsy ending and vile journalese, but it’s quite true’ This is, perhaps, a coded comment on Kipling’s own writing ethos. When on page 60, (lines 25-26) Dick declares that the Nilghai’s ‘lumbering nonsense’ can be expressed into an epigram ‘Only the free are bond, and only the bond are free’, Kipling is lauding the qualities of concision and condensation, and of conveying the maximum effect with the minimum of expression.

[Page 60, line 20] mad as a hatter A famous phrase popularised by Lewis Carroll in the character of the Mad Hatter in Alice’s Adventures in Wonderland (1865). It occurs earlier in Thackeray’s Pendennis (1849) and Carlyle’s Sartor Resartus (1833).