Some readers have the mistaken impression that the campaign described by Kipling in this chapter is based on the battle of Omdurman (1898). This is not so. Nor could it conceivably be so. The Light that Failed was first published in the winter of 1890: the battle of Omdurman was fought eight years later, in 1898. Most of the military background of Chapter 11 clearly refers to the Nile Expedition of 1884-5.

Since 1882 Egypt had been under British military occupation, though nominally rule was exercised by the ‘Khedive’ (Viceroy) under Turkish sovereignty. Because the Suez Canal was the vital route to India, Egypt was seen as an important interest for Britain. Anglo-Egyptian influence had been extending southwards into the ‘Egyptian Sudan’ beyond Khartoum during the previous decades.

The best indication of what the Nile Expedition was all about is on page 17, line 23, with the words: Before them lay the Nile, and at the other end of it was one Gordon, fighting for dear life, in a town called Khartoum’.

The enemy was the Madhi (right), the leader of a rebellion in the Sudan. He claimed to be the last prophet who was expected to conquer the world for Islam.

In January, 1884, the British Government directed General Gordon (left) to go to the port of Suakin, on the Red Sea coast (see the map below), to investigate the situation in the Sudan and report on it. The Government was interested in what went on at Suakin because of its strategic position on the route to India. On the way out from England, General Gordon suggested that he be made Governor General of the Sudan, a post he had held five years earlier. The British Government agreed. When General Gordon arrived in Egypt, he went to Cairo and saw the Khedive, who gave him instructions to effect the evacuation of the Egyptian garrisons and employees from the whole Sudan.

The British Government also agreed to his doing this but it did not intend that he should ignore its original instructions to him. While he was in Cairo he also saw the British Consul-General, Sir Evelyn Baring, who acquiesced in a plan for General Gordon to go to Khartoum instead of to Suakin. He set off for Khartoum, but the British Government did not know of the change of plan until he was riding across the desert on his way there. That is how General Gordon came to be in Khartoum.

During the first month he was there, much discussion and argument took place between Khartoum, Cairo and London as to what they should do next. Then the Mahdi closed in and sealed off all communication with Khartoum. Nothing was heard of General Gordon for over three months. During that time there were rumours that he was dead, and that he had escaped, but no one in England or Cairo really knew. Every effort was made to get through, and F. Moberly Bell, The Times correspondent in Cairo, offered £1.000 to anyone who could bring news out of Khartoum. Then, towards the end of July, 1884, a message which was a month old arrived. It showed that General Gordon was alive and still at Khartoum. Within a fortnight the British Government had sanctioned the organisation of a relief expedition.

The expedition was under the command of Lord Wolseley and consisted of about 10,000 men and a fleet of 800 whale boats, which were specially built in England. The boats were for the transport up the Nile of all the unmounted troops and of nearly all the food and ammunition for the whole expedition.

By the middle of September the first 400 of them had been built, delivered and shipped to Alexandria, whence they were taken by train and other means to just above the Second Cataract at Wadi Halfa, and then launched on the Nile. The first troops, with their stores, embarked in them on November lst. The mounted troops kept to the banks, and thus the expedition proceeded up the Nile towards Khartoum, a distance of 850 miles by river. The expedition was a brave undertaking, since very little was known of conditions in the Sudan in those days. In spite of the difficulties of getting the boats over the many rapids above the Second Cataract, it arrived safely at Korti in the last week of December.

In November, 1884, Lord Wolseley received a message, while at Dongola, from General Gordon. Its main request was to “come quickly” and “do not leave Berber in your rear”. Wolseley’s original intention was that the expedition should keep to the Nile all the way to Khartoum, but when he received this message he decided to send a flying column from Korti across the desert towards Metemma, that being the more direct way. This column consisted of four camel regiments, some cavalry and infantry, about 2,000 men in all. It went via Jakdul (mentioned in Chapter lI).

While approaching the wells of Abu Klea the column was attacked by the Mahdi’s men. The battle which followed was undoubtedly Kipling’s model for the great battle in Chapter II. Before reaching the Nile at Gubat, the column was forced to engage in another battle at Abu Kru. A detachment then went up the Nile in two steamers which Gordon had sent down to meet them, but, on arriving before Khartoum, they realised that the Mahdi had taken the town. His men had entered it two days before, on January 26th, 1885, and General Gordon had been killed. The boats turned back. 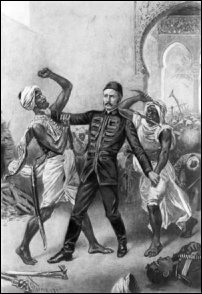 This picture (right) is an imaginative reconstruction of what might have happened to Gordon, whose violent death caused a sensation in England, where Gladstone’s goverment very nearly fell.

Meanwhile, the River Column had been struggling up the Fourth Cataract and the very difficult rapids of the Monasir country. When Lord Wolseley (at Korti) learnt that Khartoum had fallen and Gordon most probably killed, he ordered the River Column to halt. For two days the advanced boats remained at “Castle Camp” near Berti. (The men were not told the reason.) The first day was spent by the soldiers washing and mending their clothes which had become worn by the hard work of hauling the boats up the cataracts. It was the only day during the campaign that the River Column (in its advance up the Nile) had the chance of doing this. And so we arrive at the opening scene of Chapter lI.

The episode of the soldiers bathing reminded Kipling of Michaelangelo’s picture of a battle which took place more than 500 years earlier – the battle of Cascina at which soldiers were surprised while bathing (below).

Kipling introduces this incident, although no such thing happened during the Nile campaign. He appears to make the battle of Abu Klea follow immediately afterwards. This battle in fact
took place many miles away in the desert, and nearly three weeks before the River Column halted.