[Page 39, initial] The inscription on the knife blade resembles Urdu writing, but does not appear to spell anything.

[Page 39, line 3] High Veldt A plateau which includes most of Basutoland, and – within South Africa – the Orange Free State and the Southern Transvaal. It is a steppe region, with thorn trees growing on the rocky slopes.

[Page 39, lines 10-11] the Eland and the Koodoo and the Hartebeest Large south African antelopes. The Eland is the largest. It is akin to the Koodoo (or Kudu), which has long spiral horns and is marked with narrow vertical white stripes. The Hartebeest is a graceful animal, one of the swiftest of antelopes.

[Page 40, line 4] Ethiopian Strictly a native of Ethiopia, but the word has been used attributively to mean a very dark-skinned person. 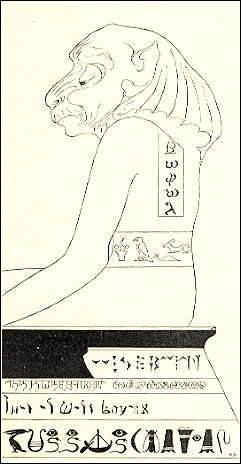 [Page 42, lines 2-3] I have drawn him from a statue The drawing recalls Egyptian statuary. Thoth, god of wisdom in Egyptian mythology, was sometimes depicted as a baboon.

[Page 42, lines 6-7] Coptic … Hebric None of these inscriptions spell anything in the scripts they imitate. They are mostly shaped to give the visual impression “Baviaan” or “this is wise Baviaan”. The marks on the sash resemble Coptic, derived from ancient Egyptian.

The characters on the belt are hieroglyphs, the picture characters of Egyptian writing and carvings, sacred to the priests. The upper inscription on the plinth looks like Cuneiform, a form of writing found in ancient Persian and Babylonic inscriptions. The two inscriptions following imitate Bengali and Burmese scripts, and the next gives the impression of Hebrew. The lowest line is thought to be picture-writing invented by Kipling.

[Page 45, lines 2-4] Say that … the forest must have been This sentence was not in the Ladies’ Home Journal. “Sprottled and spottled” in its description was also added in the book version.

[Page 46, lines 10-11] O you person without any form Instead of this in the Ladies’ Home Journal: “This is much too serious for dumb-crambo. (He meant he wouldn’t eat him up, Best Beloved.)” Subsequent references to “any form” have also been added in the book. “Dumb-crambo” was an acting game using mime only.

[Page 42, line 5] Sambo According to Chambers’ Dictionary, this word originally meant the offspring of a black person and a native American or mulatto, but came to be applied to anyone with a dark skin. Kipling was probably thinking of Helen Bannerman’s Little Black Sambo (1899), a once popular but now controversial children’s book. The original British edition was illustrated by the author, showing a child who was not African but South Indian, as the plot requires.

[Page 42, line 15] “Find-the-Cat” Puzzle pictures, often including animals, were popular in the last half of the 19th century. The precise one referred to here has not been identified.

[Page 52, lines 24-5] pudding-stone A composite rock of rounded pebbles in a silicious matrix.