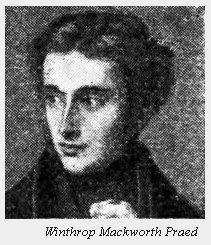 “Praed” Winthrop Mackworth Praed (1802-1839), was a lawyer, Member of Parliament and poet, remembered mainly for his humorous work, which sometimes cloaked serious subjects.

The old squire’s red-faced coachman drives him at speeds the Poet considers excessive, until he sees the new young squire’s expensive motor car and reckless chauffeur. The poem conjures up, perhaps with a certain nostalgia, a picture of comfortable horse-drawn journeys in the countryside, out-dated by modern mechanised ways.
Ann Weygandt (p. 131) comments:

There is no doubt that Kipling knew Praed. His “The Landau” … gives a pleasant parody of the mood and cadences of “Every-Day Characters” and especially “The Vicar.” Its eight-line stanza with alternating masculine and feminine endings to its lines, its Byronic rhymes, and its trick of using Latin phrases for rhyme-words or in the body of the poem, are all preserved.

The opening lines of “The Vicar” run as follows:

Some years ago, ere time and taste
Had turn’d our parish topsy-turvy,
When Darnel Park was Darnel Waste,
And roads as little known as scurvy,
The man who lost his way between
St. Mary’s Hill and Sandy Thicket
Was always shown across the green,
And guided to the parson’s wicket…

[Title] landau A horse-drawn four-seater carriage-–usually luxuriously fitted-–with hoods front and back that can be raised and lowered.

[Line 1] The first line echoes Thomas Ford’s: ‘There is a lady sweet and kind’. [Suggestions from readers on the significance of this will be welcome.]

This also has a faint hint of :

I never had a piece of toast, particularly long and wide,
But fell on to the sandy floor, and always on the butter side

[from a newspaper in Norwalk, Ohio in 1841, itself parodying the epic poem “Lalla Rookh” by the Irish poet Thomas Moore (1779-1852). Thus have poets echoed one another down the years; Eds.]

[Line 4] Tanner’s End to Marlow Ditton there is a ‘Tanners End Lane’ in present-day north London (N.18) , but this is a typical name for a road in an English country village, which that area may well have been a hundred years ago. Marlow is a town on the River Thames in Buckinghamshire. Thames Ditton is in Surrey but we have not identified a Marlow Ditton. We believe that these country-sounding names were coined by Kipling,

[Line 6] eau-de-vie ‘Water-of-life’ in French. A distilled liquor, like brandy or whisky.

[Line 8] Jehu King of Israel, famous for furious driving in this chariot. 2 Kings, 9. 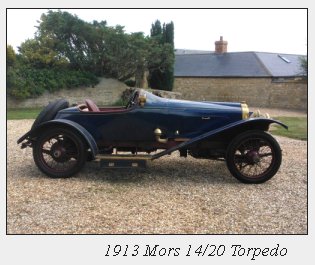 [Line 12] Mors communis omnibus Death is common to all men (Latin).
mors was Latin for death; but it was also an early French marque of car, one of the first to take part in automobile racing, beginning in 1897.
Alastair Wilson writes: Is Kipling not also making a multiple play on words here? Old John is now laid to rest, and the young squire’s son seems likely to follow sooner rather than later, such is the truly Jehu-like speed with which it may be inferred he drives. And omnibus is also a reference to the fact that the young man probably referred deprecatingly to his expensive car as “my ‘bus”. [A.W.]

[Line 14] crowd The Oxford English Dictionary offers three meanings, the first (which this clearly is) means to press on, or thrust (in the hunting-field sense) – or in the nautical sense “to crowd on all sail”. [A.W.]

[Line 16] the Act In this context, The Motor Car Act of 1903, which came into force on 1 January 1904, required all motor vehicles to be entered in the Government’s vehicle register, to carry number plates and to observe a speed-limit of twenty miles (32 kilometers) per hour. (See “A Tour of Inspection”.)