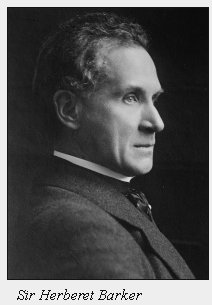 Sir Herbert Barker: Kipling and his wife both consulted him while they were in Jersey in 1934. He had retired from regular practice in 1922. He had had a lot of disagreements with the medical establishment and was never recognised by it. In a letter to Peter Stanley, September 1934, Kipling said of Barker:

‘Thanks for your notes about Barker. (He’s a Knight – not a Bart). He has done wonders for your Aunt Carrie in the way of setting her up and making her walk more easily and freeing her from pain. But they dam well won’t recognize him officially! I understand it’s just one old dinosaur on the Council of the Physicians or Surgeons who is jibbing like a mule. And ‘official recognition’ has to be unanimous. A sweet world!’ [Thomas Pinney (Ed.) Letters vol 6 p. 289] 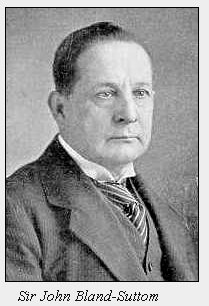 Kipling drew on Bland-Sutton for the character of Sir James Belton , nicknames ‘Howlieglass’, Head of St. Peggotty’s Hospital in ‘The Tender Achilles’(1929). Kipling wrote a ‘Preamble’ for Bland-Sutton’s autobiography

The Story of a Surgeon

.
Dr Philip Bres: attended Kipling in 1934 when he (Kipling) was at Cannes.
Ironside Bruce: A radiologist at Charing Cross Hospital and the Hospital for Sick Children at Great Ormond Street in London. He x-rayed Kipling in 1918. He died in 1921 at the early age of 42 from radiation injuries. His death was a shock to the medical world and led to the formation of the British X-ray and Radium Protection Committee. . [Thomas, Adrian, “One Hundred Years of Medical Radiology”] 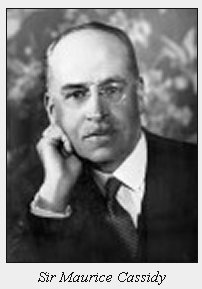 Sir Maurice Cassidy: (1880-1949) He was Physician to the Royal Household in 1930 and Physician to Kings George V, Edward V111, and George V1. He attended Kipling in 1934. Kipling had asked Dr Curteis, his G.P., to refer him to Sir Maurice, saying he had been recommended highly to him.
Dr W Christie: Possibly William Francis Christie, M.B., Ch.B. 1909, University of Edinburgh, M.D. 1919, University of Edinburgh. He attended Kipling in London in 1922. 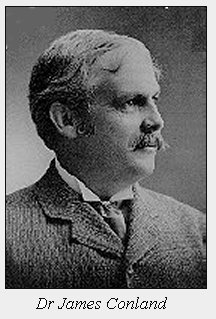 Dr James Conland: (1851-1903). He was the Kipling family doctor when they lived in Vermont. In December 1892 he delivered Kipling’s first child, Josephine, and, years later, in his autobiography, Kipling wrote

‘Her birth brought me into contact with the best friend I made in New England – Dr Conland.’

Conland had been a sailor and fisherman before studying medicine. He took Kipling to Boston Harbour and to Gloucester and helped with much of the detail for Captains Courageous (1896). Kipling gave him the original manuscript. Kipling collector W.M. Carpenter described him:

‘a country doctor of the old school, which means he knew much about many ailments, made his calls regardless of the weather, was neighbourly, patient, friendly and considerate, and more concerned to be of service than to collect his bills.’ 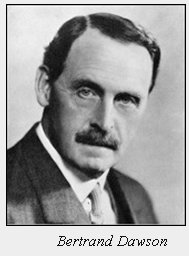 Bertrand Dawson (1864-1945): 1st Viscount Dawson. One of the most distinguished physicians of the time. He was President of the Royal Society of Medicine, of the Royal College of Physicians, and of the British Medical Association. Also Physician-in-Ordinary to King George V. With Dr Curteis, he looked after Kipling when he was suffering from pneumonia in January 1926. Two years later he looked after Carrie Kipling when she was found to have diabetes. In a letter to Elsie, Kipling said: ‘Lord Dawson is in charge and has been infinitely kind and flexible’. He attended Kipling again in 1931. [Thomas Pinney (Ed.) Letters vol 5 p.445, and p.446, note 2. ]
Theodore Dunham: (1862-1951) He was a surgeon in New York and Professor of Surgery in the New York Post-Graduate Medical School, 1897-1922. He was one of the doctors who attended Kipling when he was seriously ill in New York in 1899. He married Josephine Balestier, Kipling’s wife’s younger sister. [Thomas Pinney (Ed.) Letters vol 3, p.292, notes 1 and 4.]
Dr William Evans (1895-1988) M.D., F.R.C.P.(Lond) : worked at St Bartholomew’s Hospital, London. Became a cardiologist and was one of the founders of the British Heart Foundation. Kipling consulted him in 1932. 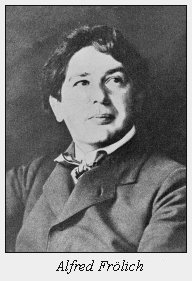 Alfred Frölich: (1871-1953) He was an Austrian neurologist and pharmacologist. After qualifying from the University of Vienna in 1895, he continued to work there and was professor of pharmacology and toxicology from 1919 – 1939.

He first met the Kiplings at Engelberg in 1908 and at times prescribed for their various minor illnesses . In 1910 he referred Carrie Kipling to Dr Eichorst in Vienna. Frölich‘s Syndrome is named after him. In 1939 he went to the USA where he continued to do medical research at the Jewish Hospital of Cincinnati.[Thomas Pinney (Ed.) Letters Vol. 3, p.361, note 2]. Also the wikipedia entry for Alfred Fröhlich

Sir Harold Graham Hodgson, K.C.V.O., M.B., F.R.C.P., F.F.R., D.M.R.E. (1890-1960): received his medical education at the University of Durham. Served in France during the war as a regimental medical officer and was wounded. In 1924 he became honorary radiologist to King’s College Hospital. From 1933 until his retirement in 1956, he was director of the department of x-ray diagnosis at the Middlesex Hospital. He x-rayed Kipling in 1931. 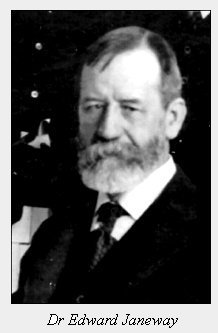 Dr Edward Gamaliel Janeway, (1841-1911): He qualified in 1864. He worked in New York at the Bellevue and Charity Hospitals. He was Health Commissioner of New York 1875-1881. He assisted Dr Dunham in looking after Kipling during his illness in New York in 1899.
Dr Charles George Jarvis: M.R.C.S. England ,1907 and L.R.C.P. London,1907. He worked in Paris and, in 1933 he attended Kipling who was in Paris at the time.
Dr Lang: Possibly Arthur Joseph Lang, Jansenville, Cape Province, South Africa. M.R.C.S. Eng 1894, L.R.C.P. Lond, 1894. According to Kipling’s Clinical History, Dr Lang was Dr Jamieson’s doctor. He attended Kipling in London in 1922.
E. B. Lawrie: Obtained his MB degree from Edinburgh in 1867. He was Surgeon and Professor of Anatomy and Surgery at the Lahore Medical School. He attended Kipling in February 1885 when he had been blinded by a ‘sting’, but Lawrie’s ‘attention was more occupied by the blain on my face’.
[Pinney, Thomas, (Ed.), Something of Myself and Other Autobiographical Writings, Cambridge University Press, 1990, p.206.]
William Stanley Melsome (1865-1944): a medical practitioner in Bath. He attended RK and CK there. He had been a fellow of Queens’College, Cambridge, 1888-95 before moving to Bath. According to Kipling, Sir John Bland-Sutton thought very highly of him. [Thomas Pinney (Ed.) Letters Vol.4, p.362.]
William Ernest Miles (1869-1947) : received his medical education at St. Bartholomew’s Hospital and College in London. He became a surgeon at the Cancer Hospital in London. He became a Fellow of the Royal College of Surgeons in 1894. He was Lettsomian lecturer at the Medical Society, London in 1923. He was particularly interested in surgery for carcinomas of the colon. Miles’ operation, combined abdominoperoneal resection for cancer of the lower sigmoid and rectum, is named after him. He attended Kipling in 1922. [Enersen, Ole Daniel]
Dr Porges, Marienbad: Treated Kipling in September 1935.
Dr Charles Bland Radcliffe: He studied medicine at the University of Paris. His father was a ministerial colleague of the Reverend Joseph Kipling, (RK’s grandfather). His consulting rooms were in Henrietta Street, Cavendish Square. He became the family doctor for Georgiana Burne-Jones (RK’s aunt) and her family, and delivered Kipling’s sister, Trix in June 1868. Possibly he was the doctor sent to Southsea to examine the young Kipling’s eyes, who reported that he was half-blind. (Although in “Baa Baa, Black Sheep” it was “Inverarity Sahib”, who knew Papa and Mamma, and was commissioned to see Punch and Judy, and who had ‘ushered’ Punch into the world.) [Ankers, Arthur R, The Pater, Hawthorns Publications Ltd., 1988, and Pinney, Thomas, (Ed.) Something of Myself and Other Autobiographical Writings, Cambridge University Press, 1990, p.161.] 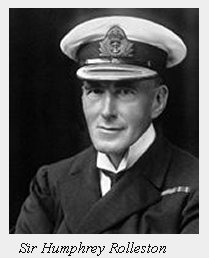 Sir Humphrey Rolleston K.C.B., G.C.V.O.,(1862-1944): received his medical education at St Bartholomew’s Hospital, London. He became Physician to St George’s Hospital, London in 1898. In World War I he was consulting surgeon and Surgeon Rear-Admiral with the Royal Navy. He was Senior Censor and President of the College of Physicians 1922-26, and was Regius Professor in Cambridge 1925-32. He supported Lord Dawson during the terminal illness of King George V. He attended Kipling in 1922.
Dr Georges Roux: attended Kipling in Paris in 1933. [RK’s Clinical History (U. Sussex 25/14)
Sir Alfred Webb-Johnson: President of the Royal College of Surgeons. He attended Kipling in 1931 and 1936. According to Lord Birkenhead in his biography of Kipling, Sir Alfred edited Something of Myself after Kipling’s death.
L. Tarleton Young: He was a surgeon and a professor at the Lahore Medical School. Kipling met him during the time he was working on the Civil and Military Gazette at Lahore. [Pinney, Thomas, (Ed.), Something of Myself and Other Autobiographical Writings, Cambridge University Press, 1990, pp. 210-211.