[Line 1] Our King went forth on pilgrimage The 1922 book, The King’s Pilgrimage, covers the King’s tour in four parts. This line is used as the epigraph to Part I.

[Line 5] And there was little show of pride, The opening line of the book text reads ‘It was our King’s wish that he should go as a private pilgrim, with no trappings of state nor pomp of ceremony, and with only a small suite.’ He travelled by train, sleeping in a carriage which he had used during the war, and he visited the cemeteries by car.

[Line 6] Or prows of belted steel, That is, no warships, which could have had an extra steel belt round the hull at the waterline as an anti-torpedo measure.

[Lines 7 & 8] For the clean-swept oceans every side / Lay free to every keel. Having been swept clear of the numerous minefields laid by both sides during the war.

[Line 9] And the first land he found, it was shoal and banky ground The coast of the Belgian province of West Flanders. For most of the war the front line had run from the coast south-west of Ostende, which was in German hands, across Belgium and France to Switzerland.

[Line 11] …. the broken harbour-mouth This is Zeebrugge, a port on the Belgian coast north-west of Ostende and the starting point of the King’s tour. It had been a German destroyer base and also the mouth of a canal used by the Germans as access to an inland U-boot (submarine) base at Bruges. Zeebrugge was attacked by a British naval force on St George’s Day, 23 April, 1918.

[Line 12] Where they worked the death-ships in. The British attack attempted to make the port and canal unusable by sinking block ships filled with concrete in the navigable channel, first ramming the bridge to the mole with a submarine packed with high-explosive to prevent reinforcements manning the defences. Despite heavy casualties, neither move was entirely successful but the raid was a great morale booster.

[Line 18] For these are those that have no grave where any heart may mourn Those of the war dead lost at sea who could have no grave at all ; that is, sailors, then known as Jack Tar in the same way that soldiers were known as Tommy Atkins and whom Kipling almost certainly had in mind when writing “My Boy Jack”.

[Line 19] And the next land he found, it was low and hollow ground – Used as the epigraph to Part II of the book text, it refers to the area of Belgium and France that during the war formed the Ypres Salient and the coastal area behind it. 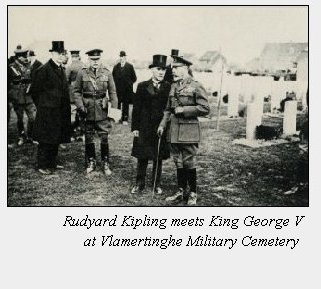 [Line 20] Where once the cities stood The city of Ypres and towns of Poperinge, Hazebrouck and Vlamertinghe, where Rudyard Kipling met the King.

[Line 27] And the next land he found, it was bare and hilly ground – Used as the epigraph to Part III of the book text referring to the battlefields of Vimy
Ridge, Albert, Loos, Arras and the Somme.

[Line 36] An hundred thousand men who died whose graves no man shall know. Those of the war dead whose graves were never recorded or whose bodies were either never identified or never found. Amongst them was Kipling’s own son, John.

[Line 37] And the last land he found it was fair and level ground – Part IV of the book text; Terlincthun and other cemeteries on the outskirts of Boulogne in the Pas de Calais area of France. 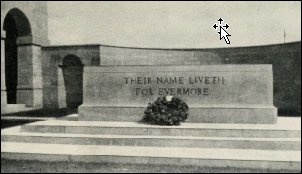 [Line 38] About a carven stone, – the carven stone was the Stone of Remembrance bearing the words chosen by Kipling from the Apocrypha, Ecclesiasticus 44, v. 14:

“THEIR NAME LIVETH
FOR EVERMORE”.

Such a stone was a feature of all the British military cemeteries with more than 1000 graves.
This photograph shows the Terlicthun stone with the wreath laid by Queen Mary.

[Line 39] And a stark Sword brooding …. The Cross of Sacrifice, erected in all military cemeteries with more than 40 graves. See the heading photograph.

[Line 40] Where high and low are one. As stressed in the speech given before this cross by King George V:

“… we remember and must charge our children to remember,
that, as our dead were equal in sacrifice, so are they equal in honour, …”

[Lines 43 & 44] And there lay gentlemen from out of all the seas / That ever called him King. From August 1914 onwards, rest camps for troops from all over the Empire had been set up in the area, later followed by the establishment of Base Hospitals at Boulogne and nearby Wimereaux. Many of the dead had been casualties being treated in these hospitals.

[Line 45] Twixt Nieuport sands and the eastwood lands … The location of the area containing the major battlefields, and hence the cemeteries now containing the bodies of those who had fallen. The “four Red Rivers” is most likely to mean the rivers Yser, Canche, Authie and the Somme which drain into the sea after running through the red-brown clayey soil of the British battle area, which figuratively had run red with blood. Nieuport, a Belgian town at the mouth of the Yser, was a small port used to supply the front round Ypres.

All that they had they gave – they gave –
In sure and single faith.
There can no knowledge reach the grave
To make them grudge their death
Save only if they understood
That, after all was done,
We they redeemed denied their blood
And mocked the gains it won.

The basic meaning of which is:

‘They gave their all in the firm belief that it was worthwhile. Nothing could make them grudge their death, except if they were to learn that the living had forgotten what their deaths had achieved and thus made a mockery of their sacrifice.’

This sense of these lines matches the final sentence of the King’s Speech:

“… I fervently pray that, both as nations and individuals, we may so order our lives after the ideals for which our brethren died that we may be able to meet their gallant souls once more, humbly but unashamed.”

but Kipling’s lines have proved capable of being questioned as to their meaning.

The artist and writer, Clare Sheridan, then working as a reporter for the New York World on a visit to Europe, was the daughter of the Frewens, neighbours and friends of Kipling in Sussex. While visiting her parents, she called on Kipling at Bateman’s with her children and quite deliberately provoked Kipling into speaking his mind on the United States and its part in the war, in particular condemning its late entry into the war and accusing it of making a large profit on war loans to the Allies. She did not mention her role with the newspaper, which subsequently published her version as having been given in an ‘interview’. As published, the views were such that they were publicly repudiated by British officials in both Britain and the USA.

While there is little doubt that Kipling did express personal views that he would never have uttered in an interview, it is also quite clear that Clare Sheridan obtained them by deceit and strung them together after their meeting in order to create a sensation. This she admitted in a later book, The Naked Truth, (Harper Brothers, New York, 1928) confessing that:

“even ‘home’ should be turned to journalistic account” and “Was not Kipling of interest to America?”. However, she knew that Kipling was well known for not giving interviews to reporters.

Dismissing any doubts with “As to Kipling friendship, what was it worth?”, she deliberately trapped Kipling, whom, she wrote, “stumbled into my net. He let himself go about America, and I, breathless with suppressed eagerness and excitement, stored up every word, threw in a question and a remark to stimulate him to further statements …”

Her version of what was said appeared in the New York Sunday World of 10 September 1922 as a record of an interview in which she wrote that Kipling’s remarks were in response to her asking him what he meant by the last lines of the poem, ‘The King’s Pilgrimage’; that is, what was it ‘that mocked the gains they won’?

It is possible to read the penultimate line of the poem in two ways; either as (with my insertions in italics) ‘We, whom they had redeemed, then denied their blood’ – that is, by doing something wrong in the future, or it can be read as ‘We, whom they redeemed had denied their blood’ – that is, the wrong has already been done. According to Sheridan, Kipling meant the latter and that it was the actions by the United States during and after the war that had already ‘…denied their blood’. It is, of course, possible that Sheridan, unaware of a close link between the verses and the speech given by the King, really did not see the first meaning and hence asked the question.

After The World had published Sheridan’s piece, Kipling issued a statement through Carrie denying that he had given an interview, which was technically correct, and denying that the words were his, which could be technically true but he must have said something on those lines. However, it is difficult to believe that Kipling, having put words into the mouth of his King, should then so construct the matching stanza in the poem, which he knew would accompany them in print, with a double meaning in order to make a political point which could only cause him severe embarrassment, or worse, if revealed.

Either way, that is what eventually happened and feeling deeply betrayed, with his health already in a poor state, Kipling went through a very black period both personally and professionally, and with his public standing damaged.

A fairly accurate summary of the interview as it appeared in The World is repeated in Chapter 1 of Rudyard Kipling’s World (R Thurston Hopkins, Holden & Co., London, 1925), although without serious comment. The intentions of Clare Sheridan and the effect on Kipling are very well covered by Professor William B Dillingham in Being Kipling (Palgrave-Macmillan, New York, 2008)
[I am grateful to Alastair Wilson and David Alan Richards for providing me with details from original sources.]