[Page 59] In the verse heading of chapter 1 Kipling quoted the first verse of his poem “Buddha at Kamakura” [1892]. But here the verse “…every Soul that clung To Life…” is not from the poem, but stands unique to this chapter. According to Buddhism, the cause of rebirth is the craving for life’s illusory pleasures.

[Page 59, main text, line 2] Arain one of the important tribes in the area of Amritsar and Lahore, along with the Jats, Aroras, and Rajputs, who may be Hindus, Muslims or Sikhs.

[Page 63, line 30] Krishna popular Hindu god; eighth incarnation of Vishnu, who is the second person of the Hindu trinity, consisting of the gods Brahma, the Creator, Shiva, the Destroyer, and Vishnu, the Preserver. Only Vishnu of the trinity takes on earthly forms. Rama, Kriahna, and Buddha are the last three incarnations or avatars.

[Page 63, line 32] Prayag ancient Sanskrit name for Allahabad, the city on the confluence of the rivers Ganges and the Jumna.

[Page 64, line 10] Grand Trunk Road The historic road from Calcutta to Peshawar; it runs over 1,500 miles, built and metalled by the British Raj on foundations that were laid out in the 16th century by the Muslim invader Sher Shah Suri, who took the title of Sher Khan. A branch of the Road runs from Allahabad to Lucknow and Bareilly.

[Page 65, line 33] a native officer a Viceroy Commissioned Officer [VCO] a rank only in the Indian Army. His status was above that of a Warrant Officer and below that of a subaltern. Since Indian Independence [1947] the ranks, still maintained, bear the title of JCO [Junior Commissioned Officer] including the ranks of Naib-Subedar, Subedar or Rissaldar. [The last is an equivalent of a Subedar in a Cavalry Regiment.]

VCOs were not only some of the longest serving soldiers of a Regiment, but they also had the added advantage of knowing the language of the men in their command, often being themselves of the same race, and from the same village or district. They were valuable for breaking in newly raised regiments. As the garrison of the British Indian Army was absurdly small, its history was punctuated by the raising of new regiments to meet fresh emergencies. The highest ranking native officer, or VCO, or JCO, is a Subedar-Major (Infantry), and Risaldar-Major (Cavalry).

[Page 66, line 1] The Government had given him a good holding In a vast sub-continent there is no shortage of land, and long serving and loyal soldiers were rewarded with a ‘good holding’, a grant of land.

[Page 69] Taksali Gate in Lahore; taksal is a mint for making coins.

[Page 72, line 2] scissor-hocked according to Brigadier Alec Mason in the ORG, this was a term invented by Kipling to apply to “weak legged horses as a man might be called knock-kneed; the hock is the joint of the hind leg above the fetlock, and it should be vertically above it.”

[Page 72, line 20] Commissioner Sahib By definition, a Commissioner was senior to a Deputy Commissioner, and therefore responsible for a larger district or province. Sahib is a term of respect, meaning ‘master’, ‘benefactor’, ‘Mr’, ‘boss’, or ‘sir’.

[Page 74, line 28] stood fast to their salt loyal and faithful and grateful.

[Page 75, line 4] Sobraon, Chillianwallah, Moodkee, and Derozeshah four battles in the Sikh Wars fought between 1845 and 1849. The British won all, and the lasting respect of the Sikhs.

[Page 75, line 24] the medal and four clasps For ‘clasps’ read ‘bars’. The Indian Mutiny medal was issued in 1859. “The maximum number of clasps [bars] to any one soldier was four.” [Brigadier Alec Mason, in the ORG]

[Page 75, line 30] jaghir A freehold gift of land given for services rendered to the Raj. [Brigadier Alec Mason, in the ORG]

[Page 76,line 19] I can drive my lance in the shade lances of cavalry regiments carried a recognisable pennant. The heel of a lance had a metal spike and a driven lance marked a spot for temporary occupation. Two sets of three-crossed lances with a sentry on guard marked a regimental camp-site. 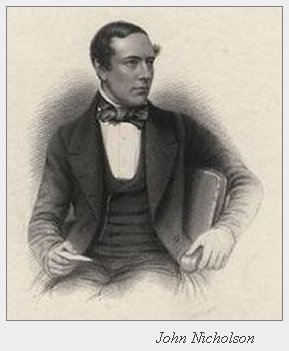 [Page 80, line 6] Nikal Seyn John Nicholson, born in Ireland, 11 December 1821, joined the East India Company in 1839. He did excellent work during the Sikh uprising and was made Deputy Commissioner of Punjab in 1851. During the Indian Mutiny he relieved Delhi but was killed in the siege on 23 September 1857.

[Page 81, line 32] thy aunts have never had a nose A sexually unfaithful woman was punished by having her nose cut off. Even after this practice stopped, the phrase is used as an abuse. The clumsy construction of the phrase deliberately follows the vernacular

[Page 82, line 1] owl’s folly in the West the owl is thought wise. Not in India, where the term ulloo [owl] is used to describe a dolt, a fool.