This poem appeared in The Times, July 2 1892 as the closing statement of an article ‘The Edge of the East’, one of a series which Kipling would later collect in Letters of Travel. It is offered as a poetical paraphrase of the notice posted by the Prior of the monastery, in which he asks that visitors, whatever their creed, should respect this place, hallowed by the worship of ages. The poem also appeared in the Civil and Military Gazette, July 16 1892 and the New York Sun. July 17 1892.

The first, sixth and eighth stanzas – the latter somewhat altered – were later used in Kim to head chapters I II and III respectively. In its original form the eighth stanza read as follows:

With voice of every soul that clung
To life that strove from rung to rung
When Devadatta’s rule was young
In worship at Kamakura.

However, when the poem was collected this stanza was omitted altogether and an epigraph was added.

’And there is a Japanese idol at Kamakura’.

The young Kiplings arrived in Japan on 20 April 1892 in the course of their round the world wedding-tour; this was cut short after the collapse of the New Oriental Bank Corporation took most of Kipling’s savings, though it is also argued that Caroline Kipling’s pregnancy had already made them decide to turn back. They left Japan for the United States, where they had already purchased the land on which to build their future home, on 27 June.

Readers may catch sight in this poem of attitudes and themes which will be worked out later in The Jungle Book, where the concept of the Law and the truths which can be told through animal tales are brought together.

[Epigraph] This is spoken in an adopted voice, the voice of one who completely fails to understand or respect the worship which takes place at Kamakura, i.e. the sort of person whose behaviour the Prior has reason to be concerned about: the poem is conceived as replying to that voice, in an attempt to redress such ignorance.

[Stanza 1] the Narrow Way …Tophet flare … Judgement Day: The poem opens by making an address to the Christian reader but in terms that emphasise what is negative and threatening in that tradition. ‘Strait is the gate, and narrow is the way which leadeth unto life, and few there be that find it’, Matthew 7,14.

Tophet-flare: The name Tophet has a number of parallel associations which led to its becoming a synonym for Hell. It was the eastern end of the valley of Hinnom, to the south of Jerusalem, where the city’s refuse used to be burned night and day. More disturbingly, it was at Tophet that the Jews, lapsing into idolatry, were said to burn children alive by passing them through the fire in sacrifice to Moloch; see Isaiah 30.33, Kings 23.10, Jeremiah 7.31 and 19.6. ‘Tophet’ may be derived from toph a drum, or tabret referring to the drums struck to drown out the cries of these children. By this reference, Kipling invokes an established image of the destruction of children in such a way that a link is made between this destruction and Christian teaching.

Judgement Day: According to Christian teaching, the world will eventually come to an end and the dead will come back to life and be judged, that is sentenced or rewarded according to their deeds. This threat of punishment has dominated the European imagination, as medieval images of the Last Judgement and the later Calvinist strain in teaching attest.

‘heathen’: These inverted commas first appeared when the poem was collected in The Five Nations.

Buddha: With the meaning ‘enlightened’, it is a title that many have earned. However, as a proper name, Buddha refers to Gautama, the son of a Hindu rajah of the military caste who, finding the way of life offered to him did not address what he found were the true human needs, went on to develop an alternative system of his own teachings. Although the language of detachment is often used in giving an account of Buddha’s teachings, in the interests of being more helpful to readers I have chosen to make use of different terms here, ones that fit better with Western accounts of the inner life.

Buddhism aimed at ethical development. It did so by means of engaging psychological reality in order to break down reflex action on the part of individuals, teaching them to hold back from complete identification with their own perceptions, thoughts and impulses in order to allow themselves to be open to the life in others and in the world. Buddha’s date of birth is disputed. 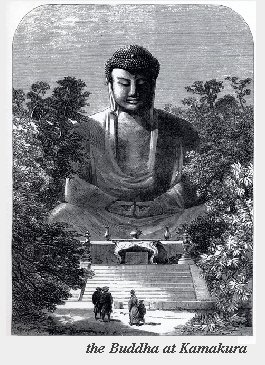 Kamakura a site of ancient pilgrimage on the west coast of the bay of Yokohama, south of Tokyo; among its many shrines is a famous and colossal image of the Buddha, which was in place as early as 1252. ‘Kamakura’ is pronounced with an even stress on each syllable in Japanese: this needs observing in order to protect Kipling’s original metre. I owe this point and many others in the notes which follow to Kipling’s Japan by Hugh Cortazzi and George Webb.

[Stanza 2] This stanza appears to be in apposition to the phrase ‘Buddha at Kamakura’, extending and duplicating the syntax of the last line of stanza 1. Buddha is the Way and the Law, exemplary and so ‘Apart’ –apart too in his modelling of spiritual freedom.

the Way, the Law: The poem invites a direct comparison between Buddhism and Christianity. To do this it contrasts The Way, or Eightfold Path, as defined by Gautama Buddha with the narrow way of Christianity. The term ‘Law’ is also involved in this comparison. St Paul used it in Romans 2.14 to denote the privileged knowledge made available to converts by Christianity. ‘Law ‘is used in Buddhism too but in that system it is associated with the set of propositions about the nature of reality which are known as the Four Noble Truths.

Maya … heart: Maya was Gautama’s mother, a figure often written out of history but as a mother Kipling gives her a central place, The image is one of complete intimacy between mother and child, her pregnant body encasing and enfolding the infant Buddha. 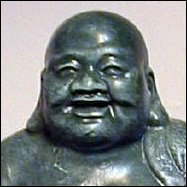 Images of the Buddha, with his inscrutable smile, have sometimes been compared with the look of a peaceful baby. At the time of writing this poem, Kipling had learned that his wife Caroline was pregnant with their first child. This momentous knowledge brought new intuitions, taking him back to his own infancy and the experiences which had informed it.

Ananda’s Lord the Bodhisat: another image of relationship, in that Ananda was the cousin of Gautama, and one born at the same moment: he was a key figure in the transmission of the Buddha’s teaching and attended the aging Buddha in his last years,
A Bodhisat is a being destined eventually to become a Buddha, the state of Gautama until he attained enlightenment.

[Stanza 3] neither burns nor sees: In The Fire Sermon, one of Buddhism’s central texts, and one invoked by T.S. Eliot in the “The Fire Sermon” section of The Waste Land, ‘burning’ is identified with the input of the senses and the action of the mind. According to this sermon, all the senses are ‘burning’ and so cause us to suffer from the fire of greed, the fire of hatred, and the fire of delusion. The Buddha, as the poem reminds us, abstains. In consequence, he pays no attention to the insult offered by European visitors who condemn the worship offered to him as idolatry. A sample of such crass bigotry, where an American boasted of loudly chanting the Christian doxology while hidden within the sacred statue itself, is quoted in Kipling’s Japan, p.206 n.15.

[Stanza 4] joss-sticks: disparaging name given by Europeans to the sticks of incense burned at shrines in Asia: ‘joss’ is pidgin English for a non-Christian god.

[Stanza 6] Pride: one of the faults against which the Buddha warned. Understood to be the excessive attachment to one’s own perspective, often based on a devaluation of the way others see things. Said to result in attachment to self and aversion to others.

May feel the soul of all the East: the way of being which Kipling knew from India.

[Stanza 7] every tale … beast or bird: the stories of his life in the form of animals or birds in previous incarnations, which the Buddha related to his disciple Ananda; a collection passed down as the Jataka tales. 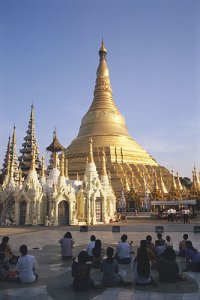 The Shwe-Dagon: the magnificent pagoda in Rangoon. Standing on a hilltop and itself loftier than St Paul’s Cathedral, the Shwe Dagon was first seen by an English person in 1586. ‘It is the fairest place, as I suppose, that is in the world’, wrote Ralph Fitch. Kipling had admired the Shwe-Dagon when he visited Rangoon in 1889, although at that time the htee was under repair, after being thrown down by an earthquake.

The temple has unique status among Buddhists, as it contains relics of the Buddha, who was said to have brought Buddhism to Burma himself. In 2007 the protest marches against the military government led by monks started out from this shrine.

[Stanza 9] Thibetan drums: Tibet was one of the last zones in East Asia to accept Buddhist rituals and ideology into its culture.

‘Om mane padme oms’: in use among Tibetans and Tantric Buddhists, as a formulation or prayer. In speaking of the ‘jewel’ (individuality) at the heart of ‘the lotus’ (the universal being), it honours the connection between all forms of life in the world. These words are among the first taught to a child and the last uttered on the deathbed of the pious.

[Stanza 8] Yet Brahmans rule Benares still: Having celebrated the wide geographical extent in which the insights of Buddhism are accepted, the poem turns to consider the ways in which they are under threat. Benares, now Varanasi, was the centre of an area in which the Buddha preached for forty years, attempting to offer a vision of the spiritual which moved away from the example offered by the Brahmins. He was critical both of the luxury enjoyed by these high-caste priests and of the superstitious practices they fostered. In spite of all his teaching, Varanasi is still a stronghold of the Hindu religion.

Buddh-Gaya’s ruins pit the hill: Buddh-Gaya, close to Gaya, south of Patna in Bihar province, India, is an ancient centre of Buddhism and the site of the Bodhi tree (a pipal) under which the Buddha is said to have ‘attained illumination’. Now largely consisting of ruins, however, Buddh-Gaya has acquired a secular character as a leading archaeological site, while the ancient Temple of Buddh-Gaya – restored by government initiative in the 1880s – now belongs to a Hindu monastery.

[Stanza 10] Is God in human image made …?: As it closes, the poem invites readers to ask questions about western iconography of the life of Christ, ranging as these do through images of the Madonna and Child to those of the crucifixion. The readers are asked to confront for themselves the tension between peaceful intimacy and savage punishment with which the poem opened, and to continue the questioning of the western tradition which it has initiated.