[Page 323, line 33] bastions, curtains, and keeps a bastion is a protruding part of the wall, like a tower; curtains are flat vertical walls linking towers; a keep is the main central tower of a castle, which may be round or rectangular.

[Page 324, line 1 ] flying bridge A bridge with no intermediate pillar or other supports.

[Page 324, line 7 ] cut lime lime trees are pruned in harvesting the flowers, which are used in making a tea.

[Page 324, lines 7-12] his bearing was less that of a curé than of a soldier The Editor thought it interesting to point out the many clues to the former career of the Curé as a soldier (probably an officer and an educated person). See also the poem. Such clues are signalled by a tricolour, thus:

[Page 324, line 20] Smyrna the city of Izmir in Turkey: the French tobacco monopoly sold foreign luxury cigarettes, such as Smyrne or Turquie, of very light and perfumed tobacco.

[Page 324, line 22] Maryland In addition to the well known “Gauloise bleue”, also sold were “Gauloises jaunes”, of a lighter tobacco, said to be made of tobacco from Maryland (USA) and “Gauloises vertes”, “denicotinized”.

[Page 324, line 31] poilu hairy one, an affectionate nickname for the soldiers serving in the trenches in WW1 : they could not shave every day ! The last surviving poilu died in 2007.

[Page 325, line 10] Bo… the Curé starts to say “Boches”, the slang nickname for the German soldiers (or for all Germans), and then catches himself. It may be that “Boche” at the time was too crude an expression for an educated person to use.

[Page 325, line 9] … Christianity was spreading in the Roman army … this dates this battle approximately to the 3rd century AD, as Christianity was legalised by Constantine the Great in 313. Perhaps the victory in spite of the defections might be interpreted as a miracle ?

[Page 326, line 7] double capacity both as a soldier and as a priest 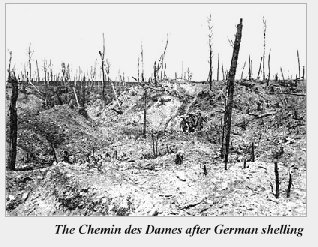 [Page 326, line 26] Chemin des Dames ‘The Ladies’ Way’. This small road near Verdun ran on the top of a ridge, leading to a chateau in which young members of Louis XV’s court, including his daughters, gathered for parties, hence the “dames”. It was the site of most terrible battles in WW1. The scale of the fighting at Verdun is reflected on the war memorials in just about every town and village in France.

[Page 326, line 30] immobilised from the soul outwards a description of what would today be called ‘shell shock’.

[Page 327, line 7] Pan another reference that shows that the Curé is an educated man.

[Page 327, line 19] Kodak picture already before WW1, in France, Kodak had become a generic name for any portable photographic cameras, from which cheap pictures were sold.

[Page 327, line 25] mick-robs Microbes. The French do not hear nor pronounce the length of the vowels: the Curé does not say ‘maïcrobes’, as the English do, but ‘mickrob’, with a short ‘i’.

[Page 328, line 9] Zeppelinistic As early as 1900 the German Count Zeppelin was building dirigible airships that could be used in war (hence the insulting derivation by the Curé), and experimentally to establish commercial airlines. The fire hazard of the hydrogen used to give lift, and the weakness of available engines, held back their development.

[Page 328, line 19] Cartel Cartel des Gauches: a coalition of the leftist parties that won the elections in France in 1924. This shows that the conversation took place on or after that date.

[Page 328, line 32] panache A ‘panache’ was a originally a bouquet of feathers on a hat, and came to mean gallantry of style in order to impress. The Curé is suggesting that the school-master’s atheism is an affectation.

[Page 329, line 2] arrivistes people in politics, in the administration or the army, whose principal or only preoccupation is to climb the ladder. The Curé suspects Falloux, a schoolmaster, of pretending to be an atheist, because in the French school system it is good for the career, in times when the government is socialist.

[Page 329, lines 6 and 9] Lourdes The celebrated place of pilgrimage in the South-West of France, where in 1858 the Virgin Mary is said to have appeared to the girl Bernadette Soubirous. It has become a renowned place of healing for Christians. As a consequence, it is also, unfortunately, spoiled and polluted by tourism and commercialism. This explains the “Ah…” of the Curé, and his reluctance to let Martin be led there, or for the “miracle” to be advertised.

[Page 329, line 8] Naaman was a leper in Syria he was to be cured by bathing in the river Jordan, but, impatient, he preferred to bathe in one of the rivers in Syria, Abana or Pharpar. (1 Kings,5).

[Page 329, line 32] moustache nickname for the infantrymen in WW1: every man wore one.

[Page 330, line 6] I do not desire … the Curé is confident that his visitors will share his educated tastes and loathe the circus of “a Lourdes”.

[Page 330, line 23] Gouraud General Henri Gouraud, who lost his right arm in the battle of Gallipoli against the Turks, in the Dardanelles. The French Corps Expéditionnaire de l’Orient, with the French Mediterranean Fleet, took part in this campaign in 1915. In 1918, on the Western Front, General Gouraud’s 4th army drove back the Germans before Rheims and in the Argonne.

[Page 330, line 29] the itinerant mender of umbrellas itinerant artisans, such as this mender, glazier, tinker, were common in the country up to WW2.

[Page 331, line 13] crapulous English dictionaries tend to define this as drunkenness. The French word is “crapule” and means “individual without morality”. Whether drunken or immoral, it will soon be understood why the umbrella-mender might have been the saint himself, coming back to this world to launch his miracle.

[Page 331, line 16] second line in early 1918, the Allies faced a strong offensive from the Germans, who had developed an improved tactic. Thanks to the synchronized precise timing of infantry and artillery provided by intelligence from air observation and radio, they first crushed the first line of the opposing troops by heavy artillery fire, then at a precisely determined time, the assault lines attacked on the “cleaned” terrain,and then followed the artillery rolling barrage, with the same precise timing.

Marechal Pétain, the French General in Chief, had planned an audacious response, leaving empty the terrain of this first line by withdrawing during the night, when the activity of the enemy predicted an attack, so that the German fire fell in a void, this preventing effective synchronisation of their infantry and artillery. General Gouraud was the first to use this approach, with success, on July 15 1918.

[Page 331, line 30] Foot Chausseur A misprint for ‘chasseur’. A chausseur is a shoemaker, a chasseur an infantryman. The word is spelt correctly at 338/21.

[Page 331, line 30] Poor little rats of the Line The ORG‘s Editor having had some personal experience bearing on the matter, the present one thinks it appropriate to leave him the pen:

The Editor, as an officer in a Territorial Battalion of Infantry at the time, is not too sensitive, and would add the Music-Hall phrase which came into use after 1918 — “PBI” — which did not mean “Pure Beautiful Infantry” but “Poor Bloody Infantry”, sometimes pictured as caught in no man’s land between the fire of our own artillery and that of the enemy — not to mention our tanks also.

[Page 334, line 8] Juggernauts from the Hindi, meaning ‘Lord of the
World’, one of the titles of Krishna. An idol of the deity was dragged in procession in the streets of Puri on an enormous chariot under the wheels of which devotees threw themselves to be crushed. Rather an exaggeration in this case.

[Page 335, line 2] tumbril a cart with a ‘tailgate’ that tumbles down to allow the vehicle to empty its load to the rear. After the French Revolution of 1789, tumbrils were used during the Terror to carry the condemned to the guillotine, hence the meaning of the metaphor; to ‘mount the tumbril’ was to stand condemned.

[Page 335, line 11] Salomé’s basin On which the head of John the Baptist was presented to her after she had danced for King Herod. (see Matthew 14,6-11). In this case the heads of Falloux and the altar-boys were to be metaphorically offered to the public.

[Page 336, line 3] Faunus The Greek God Pan, the protector of the shepherds and of the natural world.

[Page 336, line 11] Atropos In Greek mythology the oldest of the three Fates, who determines human destiny, and cuts free the souls of the dying with her scissors.

[Page 336, line 19] Saint Jubanus, the repairer of umbrellas the Curé affirms his hypothesis.

[Page 336, line 29] SGDG Sans Garantie Du Gouvernement Without Guarantee from the Government: In France patents protect the rights of their owners, but offer no guarantee to the buyer of the goods.

[Page 337, line 22] Sidi bel Abbas (should be bel Abbès) One of the cities in Algeria, where the Légion Étrangère (the French Foreign Legion) was stationed, at a time when by law it could not be stationed in France proper. A clue to the Curé’s past as an officer in the Légion. See the poem.

[Page 338, line 5 ] ‘Pristi! A mild oath; from sacristie, literally meaning ‘vestry’ (a small room in a church). It expresses wonder, and might be translated into English as “Good Heavens!”

[Page 338, line 10] the sin of laughing in church one may note that this “sin” has also been the theme of Umberto Eco’s modern novel The Name of the Rose, in which a medieval abbey is the theatre of serial murders of its monks by an old blind brother. The murderer wants to prevent the unique surviving copy of the 4th book of Aristotle, on “Comedy”, in which the sinfulness of such an act is denied, from being revealed in the forbidden sector of the Abbey’s great library.

[Page 339, lines 5-7] Rabelais The famous writer (1494-1553) of the French Renaissance; one of the creators of the modern French language. Gargantua is one of his best known satirical novels, starring the giant of that name. 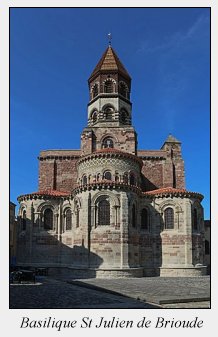 [Page 340, line 6 ] St Julian of Auvergne should be spelled ‘Julien’. Auvergne is the name of the province covering the mountains of the Massif Central.

This romanesque cathedral is known as St Julien de Brioude, after the name of the city in which it stands, the biggest church of its kind in the region.