The story was first published in The Windsor Magazine and McClure’s Magazine in February 1899, and subsequently collected in Stalky & Co. (1899) It was later included in The Complete Stalky & Co. 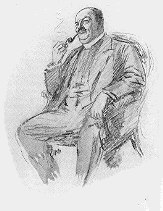 As a group of masters chat in the Common-room, the Padre happens to mention that Stalky & Co., in Number 5 Study, help each other with their work a great deal. Their Housemaster, Prout, decides that this amounts to systematic cribbing, turns them out of their Study and returns them to the form-rooms with the younger boys.

They respond by making his life, and that of the prefects, a misery. They incite riotous behaviour, create the impression that the house is rife with usurious money-lending, and encourage the younger boys to sing satirical songs, written by Beetle, about their Housemaster. Before long the prefects are begging Prout to let them go back to their study, which he does. They are beaten by the Head for bothering their Housemaster, but Prout will handle them with greater care from now on.