“Wordsworth” William Wordsworth, 1770-1850, one of the great English Romantic poets of the late 18th and early 19th Centuries. This verse borrows its title from “The Idiot Boy”, one of his Lyrical Ballads, but Kipling’s words are based on this poem: 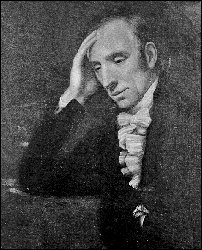 She dwelt among the untrodden ways
Beside the springs of Dove,
Maid whom there were none to praise
And very few to love:

A violet by a mosy tone
Half hidden from the eye!
—Fair as a star, when only one
Is shining in the sky.

She lived unknown, and few could know
When Lucy ceased to be;
But she is in her grave, and, oh,
The difference to me!

Kipling’s lines tell of a young reckless and perhaps unworldly driver, who is often arrested and fined. Wordsworth was an indefatigable walker among the mountains of the Lake District in north-west England, where he lived. He often walked alone.
Ann Weygandt comments:

“The Idiot Boy”, which is directly taken from the first and last stanzas of “She dwelt among the untrodden ways”, does not cheapen its original as does “Jane Smith”, but, while it catches the poem’s cadences, it is too obvious to be clever. Anyone could have written it. The impression left after a review of Kipling’s allusions to Wordsworth in every kind is that he knew him well, and respected him, but had no special enthusiasm for him.

Andrew Lycett (p. 356) is also unimpressed by this ditty, taking it as an example of the ‘modest fare’ offered by the series.

But Harry Ricketts in KJ 305 comments:

Kipling plays a number of games here with Wordsworth. The title is
of course lifted straight from Wordsworth’s ‘lyrical ballad’ of the same
name. ‘Wandered’ immediately echoes ‘I wandered lonely as a cloud’,
but the Wordsworth the parody mainly recalls is the ‘Lucy’ poem
“She dwelt among the untrodden ways”, in particular the final pathetic
quatrain which Kipling splendidly undermines with his ‘differential
gear.

[Line 1] grade American usage for the steepness of a slope, known as ‘gradient’ in the United Kingdom. A serious issue for early motorists, indeed for Kipling, since there is a steep hill up from Bateman’s to the main road above.

[Line 8] differential gear the mechanism in the rear axle that slows one wheel when the vehicle turns a corner. A failure could cause a car to go out of control. This is, as Weygandt points out, a direct echo of Wordsworth’s last line.