This poem was published in the Civil and Military Gazette on 9 November 1886, with the signature ‘Kingcraft’ and the subheading—See next Column. “Kingcraft”, whose death had been reported in October, had been for years the finest pony in India. The Indian Planter’s Gazette and Sporting News had written:

‘Full of age and honour, the best horse of his day has been gathered to his fathers’. The poem was not collected by Kipling, but is to be found in Rutherford (p. 344) and Pinney (p. 1829). Pinney notes (p. 2257) that the poem is among a collection of loose leaf manuscripts in the Kipling papers at the University of Sussex Special Collections; also that the CMG for November 9th reported that the steeple-chase course at Umballa had been ‘altered and made easier’.

Though the poem was not signed or collected by Kipling, there is no doubt that he wrote it. Ten years later, E. Kay Robinson, his Editor at the CMG from the summer of 1886, published a memoir, Kipling in India, which discusses this poem and its reception at some length:

In sporting matters, for instance, I suppose nothing is more difficult than for a man who is no “sportsman” —in the exclusive sense of the men who carry the scent of the stables and the sawdust of the ring with them wherever they go—to speak to these in their own language, along their own lines of thought. Of a novelist who writes a good sporting story, it is considered praise to say that “none but a real sportsman could have written it.” But Kipling was no sportsman and an indifferent horseman; yet his sporting verses always took the sporting world in India (where sport takes precedence of almost every other form of human activity) by storm.

I recollect in particular one case, in which a British cavalry regiment, once famous in the annals of sport and quartered at Umballa, formerly renowned as the head-quarters of military steeple-chasing in India, published an advertisement of their steeple-chases and, to attract number rather than quality of entries, stated that the fences were “well sloped” and “littered on the landing side,” or something to that effect. Now, if Kipling had ridden a steeple-chase then, I imagine the odds would have been against his and the horse’s arriving at the winning post together. In India he could only have seen a few second-class steeple-chases in the way that the ordinary spectator sees them. But he wrote a poem upon this advertisement, reminding the regiment of what they had been, and of what Umballa had once been, in sport, and filled with such technicalities of racing and stable jargon that old steeple-chasers went humming it all over every station in upper India and swearing that it was the best thing ever written in English.

It was a bitter satire on the degeneracy in sport of the cavalry officers who “sloped” and “littered” their fences to make the course easy and safe. To the non-sporting reader the technical words gave good local color, and might or might not have been rightly used. But what impressed me was that a sporting “Vet,” who had lived in the pigskin almost all his life, should have gone wandering about the Lahore Club asking people, “Where does the youngster pick it all up?” As for the bitterness of the satire, it is enough to say that, many years after, an officer of the regiment, finding the verses in the scrap-book of a friend in whose house he was staying, apologized for the necessity of tearing the page out and burning it.
[Harold Orel, Interviews and Recollections (Vol 1 p. 72), first published in McClure’s Magazine, Vol. VII No 2, July 1896.]

The ‘next column’ in the CMG, referred to in the heading to the poem carried an item headed ‘A Sportsman’s Lament’. It reported an advertisement for the Umballa Military and Hunt Meeting to be held on 16-18 December, with a assurance by the stewards, many of them officers of the Queen’s Bays, a prestigious cavalry regiment, that the steeplechase course had been altered and made easier:

‘… the ditches are filled up, and all the rails removed. The fences are well sloped and bushed, and are well littered on the landing sides.’

A correspondent, signing himself ‘One of the Old School’, and invoking the support of well-known gentlemen-riders of North India in his protest, deplores the degeneracy of the organisers:

When we wept over the departure of the 9th Lancers, it was a great consolation to us when a keen youth said ‘the Bays will fill their place’. He was right, and in their zeal for filling things, they have filled in the ditches on the steeple course..… ‘The course has been altered and made easier.’ Shades of the 9th Lancers! When we shook our lances and followed him who never returned, when we crashed over boulders and nullahs into ten thousand Afghans at Shahpur, it was not because we had been schooled over filled-in ditches.

[When we shook our lances is a reference to a charge by the 9th Lancers against overwhelming odds near Shahpur in 1879 in the 2nd Afghan War. The commanding officer, Lieut.-Col. Cleland, was badly wounded in the attack.] 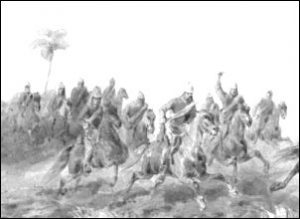 The Queen’s Bays were the 2nd Dragoon Guards, a celebrated cavalry regiment formed in 1685, which had fought in many campaigns over the years.

They were called ‘Bays’ because of their custom of riding only bay-coloured horses.

The 9th Lancers had been formed in 1715, and also had many battle honours, winning nine Victoria Crosses during the Sepoy rebellion of 1857.

The cavalry regiments saw themselves as the elite of the British army, with strong regimental pride, and a sense of superiority towards soldiers who fought on foot. The Royal Artillery, incidentally, saw themselves as superior to both, though they didn’t go on about it.

See also “The Rout of the White Hussars” and “The Story of the Gadsbys”.

ulster an overcoat, here rolled up and used as padding.

pommel the front of a saddle.

Hanoverian Pelham A form of bit with curb and snaffle as one.

martingale a strap fastened at one end to the noseband, at the other to the girth, to prevent a horse from rearing or throwing back its head.

Dehra The capital of Dehra Dun district, in a mountain valley, hence the greenness of the grass.

clavicles collar-bones, often broken in a fall from a horse. The man of many fractures (below) had broken his eight times. And cf “The Maltese Cat” (The Day’s Work p. 270), where Lutyens’ pony falls in a hard-fought Polo match:

Lutyens had to be helped up.
“What’s the damage?” said Powell, his arm round Lutyens.
“Collar-bone, of course,” said Lutyens between his teeth. It was the third time he had broken it in two years, and it hurt him.

man of many fractures Lord William Beresford, (left) VC, 9th Lancers, and Military Secretary to the Viceroy, was a leading figure in sporting circles in India. An article in the CMG, 20 August 1888, in the series “Our Gentlemen Riders”, described him as:

…an intrepid sportsman and daring rider who can boast a record of eight broken collar-bones, four concussions of the brain, and contusions innumerable.

bolter a horse running out of its rider’s control.

puller a horse pulling on the reins, unable to be slowed down.

blown and basted out of breath and well-whipped. He slows, and the rest – the ruck – run into him.

iron-bound ring-saddle We have not identified this saddle. It sounds heavy, while a racing saddle is as light as possible to spare the horse. Some saddles have rings sewn on to attach additional bits of harness or saddle-bags; they would be useful to ‘strap an ulster on the pommel’ as in verse 1. But considering the way Kipling absorbs and accurately employs technical terms, a ‘ring-saddle’ probably was a special design in those days. (Information from readers will be welcomed! Ed.)

safety stirrup a stirrup designed to release the rider’s foot in a fall. A rider may be dragged along the ground if his foot is caught in the stirrup.