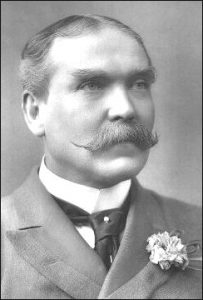 Sir William Wilson Hunter (1840-1900) was a senior
civil servant, historian and author of several learned
works on India, notably ‘The Indian Empire: its Peoples, History
and Products’ (1895), and a member of the Governor General’s
Council 1881-7.
The twenty-two year-old Kipling had lampooned
him in a poem the previous June and received a courteous, though penetrating, rejoinder.

In his biography Charles Carrington (p. 131) calls this review

‘the first analytical essay by a writer who knew Kipling’s
background, and knew India’. 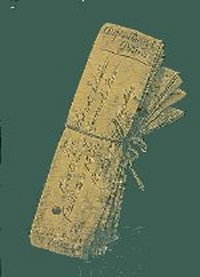 Mr. Kipling’s ditties have well earned the honours of a third edition.

They possess the one quality which entitles vers de societé to live. For
they reflect with light gaiety the thoughts and feelings of actual men
and women, and are true as well as clever.

Neither wit nor sparkling epigram, nor the laboriously
laughable rhyme, but this element of
truth alone can save the poet of a set from oblivion.

As Pope admits us to a real belle’s toilette in the reign of Queen
Anne and allows us to look over her hand at ombre; or as Praed pre-
serves alive the political coterie-life of half-a-century ago; or as Bret
Harte, in his sadder way, places us down among the saloon-gamblers
of the West with their stray gleams of compunction and tenderness—
so Mr. Kipling achieves the feat of making Anglo-Indian society flirt
and intrigue visibly before our eyes. It is not, as he discloses it, a very
attractive society. Its flirtations will seem rather childish to a London
coquette, its intrigues very small to a parliamentary wire-puller. But,
if Mr. Kipling makes his little Simla folk rather silly, he also makes
them very real. The Mayfair matron, accustomed to calmly play her
musical pawns at her matinees, will indeed marvel that any woman
should take the trouble which the Simla lady took to capture one
singing subaltern. The ‘Legend of the Indian Foreign Office’ may
seem to the diplomatic youth whose windows look out on Downing
Street to be better suited to the civic parlour of some small pushing
mayor. Although, however, Mr. Kipling’s stage is a narrow one, his
players are very much alive, and they go through their pranks in quite
fresh dresses, and with all the accessories of true tears and ogles,
audible sighs and laughter.

It is a curious little world to which he introduces us. The few
English men of letters who have passed a portion of their lives in
India, from Philip Francis to Macaulay, and the still rarer stray scholar
from foreign parts, like Csorna de Koros, who has sojourned there,
seem to have found Anglo-Indian society sometimes bizarre, and more
often intolerably dull. It is this weariness of uncongenial social sur-
roundings which gives to Sir Alfred Lyall’s poems their note of peculiar
pathos. In spite of the brilliance of his own career, India is ever to him
the Land of Regrets. The merry little people who flirt through Mr.
Kipling’s ditties look out on the scene with altogether different eyes.
They may detest the country and dislike the natives, but they find their
own small lives vastly amusing. Their personal tastes and their code of
public morals are equally simple. Their highest ideal of enjoyment
would seem, according to Mr. Kipling, to be a stringed band and a
smooth floor. Their most serious aim in life, we learn from the same
observer, is ‘an appointment’—signifying thereby not an opportunity
for doing work, but a device for drawing pay. This great object of
existence in the ditties is apparently best to be achieved by flirting,
fibbing, and conjugal collusion. Thus Mr. Potiphar Gubbins, the hero
of one poem, gets hoisted over the heads of his brother engineers by
the fascinations of his wife—an attractive and a complaisant young
person who, for reasons of her own, has married Potiphar, although
‘coarse as a chimpanzee’. Another piece relates how Mr. Sleary, an
impecunious subaltern secretly engaged to a lady in England, obtains
an appointment by proposing to the daughter of an Indian official.
Having secured the post, he frightens his fiancee Number Two out of
the engagement by pretending to have epileptic fits, then nobly
marries fiancee Number One, and lives with her happily ever after
on the produce of his fraud. In the ditty of Delilah, a veteran Simla
charmer wheedles a State secret out of an aged Councillor and be-
trays it to a younger admirer, who, in turn, promptly betrays it to the
press. In the story of Uriah, an officer is despatched to Quetta and dies
there, in order that his wife may more freely amuse herself at Simla
with the senior who got him sent out of the way. A private secretary-
ship is the well-earned reward of a young gentleman who receives a
kiss by mistake at a masked ball, and who has the extraordinary
chivalry or prudence not to publish the lady’s name. These little contes,
with various duller, if more decorous, jobs like that of the Chatham
colonel, may seem poor stuff for verse. But Mr. Kipling handles each
situation with a light touch and a gay malice, which make it difficult
to be quite sure whether he sincerely admires his pretty marionettes,
or whether he is not inwardly chafing and raging at the people among
whom he is condemned to live. He very calmly expounds the scheme of
creation in his curious Anglo-India world:

If this were Mr. Kipling’s highest flight his poems would scarcely
have reached a third edition. But in the midst of much flippancy and
cynicism come notes of a pathetic loneliness and a not ignoble dis-
content with himself, which have something very like the ring of
genius. Making verses, however clever, for the mess-room and the
lawn tennis-club cannot be an altogether satisfying lifework. To Mr.
Kipling, as to Sir Alfred Lyall in our own time, or to poor Leyden
in the past, and, indeed, to every man of the true literary temperament
who has had to spend his years in India, that country is still the ‘sultry
and sombre Noverca—the Land of Regrets’. There are many stanzas
and not a few poems in this little volume which go straight to the heart
of all who have suffered or are now suffering, the long pain of tropical
exile. For besides the silly little world which disports itself throughout
most of the ditties, there is another Anglo-Indian world which for
high aims, and a certain steadfastness in effort after the personal
interest in effort is well nigh dead, has never had an equal in history.

Some day a writer will arise—perhaps this young poet is the destined
man—who will make that nobler Anglo-Indian world known as it
really is. It will then be seen by what a hard discipline of endurance our
countrymen and countrywomen in India are trained to do England’s
greatest work on the earth. Heat, solitude, anxiety, ill-health, the
never-ending pain of separation from wife and child, these are not the
experiences which make men amusing in after-life. But these are the
stern teachers who have schooled one generation of Anglo-Indian
administrators after another to go on quietly and resolutely, if not
hopefully, with their appointed task. Of this realistic side of Anglo-
Indian life Mr. Kipling also gives glimpses. His serious poems seem
to me the ones most full of promise. Taken as a whole, his book gives
hope of a new literary star of no mean magnitude rising in the east.
An almost virgin field of literary labour there awaits some man of
genius. The hand which wrote ‘The Last Department’ in this little
volume is surely reserved for higher work than breaking those poor
pretty Simla butterflies on the wheel.