This poem was first published in 1923 in Land and Sea Talesfor Scouts and Guides, following the story “Stalky”, which tells how Rudyard’s great schoolfriend Lionel Dunsterville earned his reputation for wiliness and ingenuity. It is listed in ORG as no. 1116.

The poem, an elegantly turned sonnet, is a meditation upon the judgement that all must face at the end of life. At that moment, says the poet, whatever we may have done to guard our reputation, all of our past will be assessed, and may be found unworthy.

As Kipling explains in a footnote:

Ithuriel was the Archangel whose spear had the magic property of showing everyone exactly and truthfully what he was. 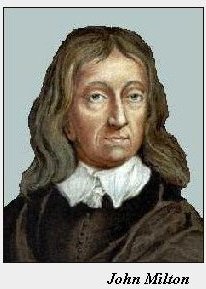 This sonnet is clearly written after reading Milton.

The image of Ithuriel’s spear comes straight from Paradise Lost. Gabriel is warned that a spirit behaving oddly has been spotted and sends two angels Ithuriel and Zephon posted to protect Adam and Eve.

They find Satan ‘squat like a toad close by the ear of Eve’, whispering to her in her sleep. When Ithuriel pricks Satan with his spear, Satan changes back in into his own likeness because

Touched lightly, `no falsehood can endure
Touch of Celestial temper, but returns
Of force to his own likeness: up he starts,
Discovered and surpriz’d…

Kipling’s sonnet also echoes an early sonnet of Milton, ‘How soon hath Time the subtle thief of youth’, in which the poet is twenty-three and thinking about what he’s done with his life so far, which is not much because he doesn’t even look grown up. Kipling’s ‘be it more or less’ closely echoes Milton’s sestet.
.

However, unlike Milton, Kipling is not using the Petrarchan sonnet form. [J.M.]