[Title] the old custom of the victors permitting a defeated military force to march out armed, with colours flying and drums beating.

[Page 105 line 1] Guildford the county town of Surrey, situated some 30 miles (48 km) South-West of London on the A3 Portsmouth Road. 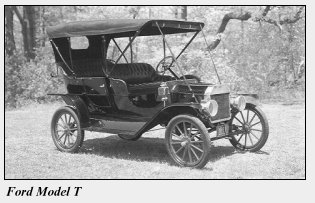 a hooded motor most cars of the time were open to the elements, but some, like this Ford (right) had a canvas hood on a frame, which could be unfurled to protect the occupants from the weather.

[Page 105 line 2] the Infant’s ancestral hall see Notes to “A Conference of the Powers” (Many Inventions, page 23, line 8) for his suggested origin and “An English School” (Land and Sea Tales, page 275, line 5) in which he also appears together with the verse “The Ballad of Boh Da Thone” and “Mandalay”. The narrator has visited the house previously in “A Deal in Cotton” (Actions and Reactions) but it is difficult to fit facts into a work of fiction.

The house is obviously a big one with a bachelors’ wing and would have a large domestic staff – see the collection Thy Servant a Dog for houses of a similar nature.

[Page 105 line 8] a cobwebbed bottle of Burgundy a magnificent wine from the ancient kingdom and duchy now known as Bourgogne, incorporated into France in 1477. The cobwebs indicate that it has been in the cellar for a long time and is, one hopes, in superb condition and ready for drinking.

[Page 105 line 9] Lieutenant-Colonel A. L. Corkran, R.I. this is ‘Stalky’ of Stalky & Co., In reality Lionel Dunsterville (1865–1946), who was at the United Services College with Kipling, wrote several books including Stalky’s Reminiscences, and rose to be a Major-General (right).

[Page 105 line 11] Sikh regiment The ORG Editors point out there were few if any all-Sikh regiments in the Indian Army of the time, though infantry battalions did have Sikh companies (see “In the Presence” later in this volume). R. E. Harbord, sometime President of the Society, and principal Editor and benefactor of ORG, served as Dunsterville’s Brigade-Major at one time in India. 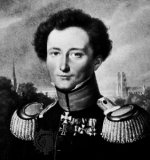 [Page 107 line 16] ragging in this context rough treatment of, for instance, an unpopular person.

[Page 107 line 24] drew him in this context to ‘draw’ is to put hounds into a copse or other enclosure, to drive out a fox so that it could be hunted. See “The Great Play Hunt” and “Toby Dog” (Thy Servant a Dog, Collected Dog Stories.)

[Page 108 line 11] Mister Wontner subalterns are often formally addressed as ‘Mr…..’ but here the emphasis indicates disapproval, as in the case of Brownell, the unpleasant temporaty master at USC who was known simply as ‘Mister’ in “The United Idolaters” (Debits and Credits).

[Page 108 line 17] old Dhurrah-bags a nickname perhaps from the joking suggestion that the colonel’s breeches were made from dhurrie – a rough cotton rug usually made by prisoners in gaol in India. Private Matthews has one on the floor of his quarters in “The Army of a Dream, part 2” (Traffics and Discoveries, page 274, line 28.)

[Page 108 line 19] Scarifungers the nickname of an imaginary regiment. There were many such nicknames: the Gloucestershire Regiment, for example, was known as ‘The Slashers’ (Brewer’s Dictionary of Phrase and Fable).

[Page 110 line 14] my old Line battalion after passing out from Sandhurst a young officer destined for the Indian Army served a year with a British regiment. Dunsterville (the real Stalky) was in the Royal Sussex Regiment in the 1880s. A ‘Line Battalion’ was an infantry battalion.

[Page 110 line 20] orderly-room where the colonel of a regiment dispenses justice. 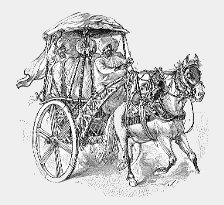 [Page 111 lines 10-15] Elliot-Hacker ….. Eurasian …. He intended to marry a girl of mixed race which would have ruined his career. See “Kidnapped” (Plain Tales from the Hills).

[Page 111 line 16] only Satan can rebuke sin , The good don’t know enough an improvement on the 17th Century saying, ‘when vice rebuketh sin’, an ironic comment on the nature of the person delivering the rebuke. (The Oxford Dictionary of Phrase and Fable, OUP, 2005)

[Page 111 line 32] bagman a play on words – a bagman is a commercial traveller, known as a boxwallah in India. Men in trade were looked down upon by the army and civil service. In this instance, however, a man in a sack.

[Page 112 line 13] taking off his boots first that would be difficult unless the sack is over his head which it is not in this case !

[Page 113 line 8] Master Trivett and Master Eames he is using a form of address that implies they are children – see page 121 line 23 below.

[Page 113 line 11] Justice of the Peace A magistrates’ court in England and Wales is composed of a ‘bench’ of (usually three) JPs or magistrates, who dispense summary justice on offences which carry up to twelve months in prison. Membership is widely spread throughout the local area and is today drawn from all walks of life; at the time of this story, however, only members of the local gentry were appointed. See “The Village that Voted the Earth was Flat” later in this volume.

[Page 114 line 1] without prejudice in this context without detriment to existing rights or claims, but the author plays upon the other meaning, of prior judgement or bias.

[Page 114 line 14] hard-mouthed usually applied to horses who are not easily controlled by bit and bridle.

[Page 114 line 32] His Majesty’s commission in a Territorial battalion the real Stalky, however, was in the regular army – see page 105 line 9 above. ‘The Territorial Army’, a volunteer part-time force, was created in 1908 when the Territorial and Reserve Forces Act 1907 combined the previously civilian-administered Volunteer Force, with the Militia and Yeomanry. See “The Army of a Dream” (Traffics and Discoveries) and A V Sellwood’s The Saturday Night Soldiers, White Lion Press, 1974.

[Page 115 line 4] sherry A fortified wine from Jerez in Spain, popular in Britain.

[Page 115 line 5] Infant never lets us put bitters into anything above twenty years old It would be a barbarous practice for a man of any judgement to add ‘bitters’ (angostura, for flavouring drinks) to a fine sherry, but Beetle and Stalky would have been used to the ‘sherry’ usually found in India at that time, which was not always the real thing. In a Lahore Officers’ Mess full of rowdy subalterns, the addition – within reason – of almost anything, might have heightened the flavour or the effect. See “The Mark of the Beast” (Life’s Handicap, page 242 line 5) in which on New Year’s Eve Fleete drinks sherry with bitters followed by various other liquors, while getting riotously and dangerously drunk.

[Page 116 line 29] it isn’t a matter that gentlemen usually discuss he means money – a hint that shows, as Stewart says in the Headnote, that Wontner is not a ‘gentleman’. This is confirmed by his being addressed as “Mr. Wontner” when normally his surname only would have been used; incidentally, he does not address Stalky as ‘Sir’ until page 125 line 7

[Page 117 lines 8 -10] convention against mentioning a woman’s name in Mess that is so, for the very good reason that she might be known to others in one capacity or another and the reference might lead to a quarrel; for the same reason religion and politics are traditionally not discussed either.

we were much surprised they were playing along with the joke – all at table would have known this very well.

[Page 117 line 27] West African ones the regiments are splendid but the climate is dreadful, with fever and other diseases.

[Page 118 line 12] priceless cognac cognac is a brandy named after the town of Cognac in western France, produced in the surrounding region.

[Page 118 line 17] even to the third generation an echo of the Second Commandment in the Old Terstament: ‘I the Lord thy God am a jealous God, and visit the sins of the fathers upon the children unto the third and fourth generation.’

[Page 118 line 20] the ’81 port Port is a wonderful wine produced from grapes grown and processed in the Douro region of Portugal, fortified with the addition of brandy and matured for several years.

The Windsor Magazine text has ’75 port. Both were ‘vintage’ – good – years.
The tale was written in 1911, when a `75 port would have been 36 years old – which is a bit past its best. My understanding is that most vintage ports reach their peak after 25-30 years. After that, their quality to the connoisseur falls off. So making it `81, 30 years old, suggests that the port was at its peak. [A.W.]

[Page 118 line 26] the bachelors’ wing a separate section of the house where young male guests were accommodated.

[Page 121 line 23] Master Bobby here Ipps uses “Master” as the usual form of address by servants to children of their employers.

[Page 123 line 15] a brigade in this context the sub-unit of an army Division, commanded by a Brigadier.

[Page 124 line 18] Ash an urban development in Guildford, Surrey, which runs into Aldershot,

[Page 125 line 7] it’s no good my begging your pardon, sir this is the beginning of his rehabilitation.

[Page 126 line 10] bugles as they blew and drums as they rolled It seems unlikely they would be paraded at this time of night unless it were the Last Post which would be bugle(s) only. Normally the only band that would be playing would be a string and woodwind ensemble in the Officers’ Mess.

[Page 127 line 1] obi in this context, a sash with a bow at the back worn by Japanese women.

Hobble skirts very narrow skirts – a fashion of the time which made it necessary for the wearer to ‘hobble’ with very short steps.

[Page 128 line 18] I want to apologise, sir…. the final stage of Wontner’s rehabilitation.

[Page 128 line 30] senile decay the general deterioration of the human body in the process of ageing.