[Page 117] Heading Two six-line stanzas by Kipling: There’s a convict more in the Central Jail
Philip Holberton writes: They describe the state of the District at the end of the story, when peace and good government have been restored. As published at the head of the story in Life’s Handicap (but not when collected) these verses are titled “The Running of Shindand.” Under that title they were set to music by Percy Grainger in 1901, and can still be found on CD and on line. (See Brian Mattinson’s list of settings of Kipling’s verse.) Shindand is a town in western Afghanistan, a long way from the scene of the story.
.

The metre, where ‘Dear boys’ is interjected before a repeat of the last line, is also used in the poem “The Lost Legion” published a few years later, in 1895. [P.H.]

[Page 117, line 1] Indus one of the great rivers of India, rising in Tibet and running some 900 miles to the Arabian Sea. It floods, often disastrously, between April and August, when the snow melts in the mountains.

Kot-Kumharsen a fictitious District that is also mentioned in “Without Benefit of Clergy”, next in this volume.

[Page 119, line 30] sending round the hat taking up a collection for the widow’s passage home.

[Page 120, line 5] “Man that is born of a woman is small potatoes and few in the hill” The first part of this phrase, which is in quotes, echoes The Order for the Burial of the Dead in The Book of Common Prayer and Job 14,1.

David Page writes: The following information has been gathered on the internet, and also with the considerable help of two Mark Twain (Samuel Clemens, 1835-1910) experts at the Universities of Tarleton (TX) and of Berkeley (CA). I had first thought that Twain might have been the originator of the phrase, but this is now very doubtful. The phrase, “small potatoes”, has been used in America since before 1831 and is similar in meaning to “small beer” in England, ie. ‘not of great account’.

The phrase ‘small potatoes, with few in the hill’ is recorded in Mitford Mathews’ Dictionary of Americanisms and was apparently proverbial as early as 1831. It is used in 1843 as a chapter heading in The Attaché: or Sam Slick in England by Thomas Chandler Haliburton, a Nova Scotian judge (1796-1865). There is also a report on a “Democratic Meeting at Hayes’ Park” by Mark Twain in the San Francisco Daily Morning Call of 3 August 1864, which also uses this part of the phrase. It is known that Twain had read at least one of the six “Slick” books. (https://www.twainquotes.com/18640803d.html)

Through the internet we have located an undated, unattributed cutting, surrounded by others in a scrapbook from the 1880s, which comes from the one of the three U.S. counties of Bradford (PA), Tioga (PA), or Chemung (NY), in the last of which is the town of Elmira. This cutting begins ‘Man that is born of woman is small potatoes and few in the hill’, exactly as used by Kipling.

At first, the cutting  reads like a modern spoof on the burial service with a reference to: ‘. . . in the bright sunlight to absorb ozone.’ However, on further investigation (https://en.wikipedia.org/wiki/Nikola_Tesla), it seems that Twain was a great admirer of Dr Nikola Tesla, a physicist and an electrical engineer, who amongst his other successes, developed an ozone generating device. Twain and Tesla became friends in the early 1890s, but unfortunately this doesn’t confirm that Twain was the author of the piece. It is not recorded in the Twain bibliography, and it has been suggested to me that the cutting reads like a typical newspaper humour paragraph of the mid-nineteenth century. In Melville Landon’s Wit and Humor of the Age (1886), there is a very similar biblical parody (“Man, born of woman, is few of days and no teeth…”) by the humorist Robert J. Burdette (1844-1914), who was one of Twain’s cronies.

There are many places in which Kipling could have come across the phrase before writing this story, but it would be pure speculation to try and identify one of them from the information currently available.
[D.P. May 2006].

[Page 120, line 7] Khusru Kheyl possibly the Kava Husru of Indo-Persian legend, the origins of which are lost in the mists of antiquity, but see Hobson-Jobson (p. 430). [Information would be appreciated; Ed.]

[Page 120, line 19] Jagai David Page writes: ‘There is a city in Balochistan, Pakistan named Jagai Sra (which we have located courtesy of Google) sited at 8,500 ft above sea level.approximately 50 miles from the Afghanistan border’.

[Page 120, line 32] Mahomed The Prophet Mohammed (c. 570-632) the Founder of Islam.
Moses c. 13th Century B.C. prophet and lawgiver who led the Children of Israel out of the wilderness, believed to be the author of the first five books of the Old Testament.

[Page 122, line 4] uncomprehendingly he could not tell the time.

[Page 124, line 11] the Council-board of India the Viceroy and his Members of Council. Not kings, but very important men – see “Tods’ Amendment” (Plain Tales from the Hills).

[Page 124, line 27] the Knight of the Drawn Sword Presumably the Commander-in-Chief of the Army who was also a Member.

[Page 125. line 2] hireling organs newspapers supposed to be bribed by the British; they were probably not, but see Andrew Lycett, p. 90 for observations on the Ilbert Bill and how the Civil and Military Gazette was dependent on government contracts. See also Something of Myself, Chapter 3.

[Page 126, line 8] his sisters and his cousins and his aunts a quotation from H.M.S. Pinafore a comic opera by Gilbert and Sullivan. See Early Verse p. 187 for a parody of Dick Deadeye’s song.

[Page 126, line 10] Dacca in Bengal, 150 miles South of Calcutta and about as far from the Frontier as one can get and remain in India.

[Page 126, line 13] shekels silver coins dating from Biblical times and here used instead of “money” or perhaps “loot” as members of his family take advantage of his position for their own profit.

[Page 126, line 17] Bengali The Bengalis were not traditionally a fighting race, unlike others mentioned on this page: [see Hobson-Jobson (p. 44), the verses “What Happened”, and the picture by Lockwood Kipling of Hurree Chunder Mookerjee, (right) from Kim. In fact, though Hurree said he was ‘a fearful man’, he proved to be extremely courageous, unlike Grish Chunder Dé, M.A.]

[Page 127, line 28] the Blind Mullah of Jagai a Muslim learned in theology and sacred law – see below and overleaf.

[Page 127, line 31] screw-gun battery small field-guns that could be dismantled and carried on mules, so they were able to operate in terrain inaccessible to wheeled transport. See the verse “Screw-Guns”, and Kipling’s Soldiers (Newark) pp. 99 and 101.

[Page 127, line 33] Ghazis fanatical followers of Mohammed who have sworn to kill all unbelievers.

[Page 129, line 6] Jehannum Gehenna of the Muslims, the place of eternal punishment.

[Page 129, line 9] Bokhara then a vassal state of Russia on the River Oxus bordering Afghanistan. Crops include cotton.

[Page 130, line 13] battle, murder, and sudden death an echo of part of The Litany in The Book of Common Prayer, where the priest says: ‘…. From plague, pestilence, and famine; from battle and murder, and from sudden death.’ The congregation replies: Good Lord, deliver us. 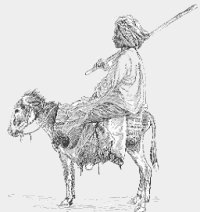 … Mowgli had not the faintest idea of the difference that caste makes between man and man. When the potter’s donkey slipped in the clay-pit, Mowgli hauled it out by the tail, and helped to stack the pots for their journey to the market at Khanhiwara. That was very shocking, too, for the potter is a low-caste man, and his donkey is worse.

[Page 131, line 25] the Maharanee of England Queen Victoria – a Maharanee (from the Hindi maha ‘great’, and rani ‘queen’) is the wife of a Maharaja.

[Page 132, line 26] dung-cake dried cow-dung Oopla used as fuel. This girl (right) (from Beast and Man in India) is carrying a load of it.

[Page 134, line 23] bump-suppers The river at Oxford is too narrow for racing in the usual way so the boats start at intervals with the object of overtaking the boat ahead so that bow and stern overlap and gently touch. They change places for the next race, so a good crew can become Head of the River. A ‘bump’ is often the excuse for a celebration. Angus Wilson (p. 75) attributes some of the author’s bitterness here to regret at not being able to attend a university himself.

[Page 134, line 32] pleader in this context, a lawyer who represents his client in court and pleads his case.

[Page 137, line 25] jab upwards the classic stroke in fighting with a knife – hold it point upwards and strike for the lower abdomen.

[Page 138, line 33] skewbald a horse with brown and white patches on the body and mixed colours on mane and tail.

[Page 139, line 19] uncovered in this context, removed his hat as a mark of respect to the dead.

[Page 140, line 5] crabbed badly-written and hard to decipher. Gurmukhi ‘From the mouth of the Guru’ – an alphabet devised by Guru Nanak (the first Sikh guru) in the sixteenth century.

[Page 145, line 6] send troops on the wire he knows about telegrams, and wonders if troops can be sent along a wire in the same way.

[Page 145, line 26] reasons in writing the classic order from Headquarters telling those who actually do the work to report what they have done and why they did it. Giles Caldin has pointed out that In the navy a generation ago, ‘Reasons in writing’ was a phrase which required an officer to report a failure in writing, a worse humiliation than a mere oral confession; it did not apply
to an ordinary Report of Proceedings. It seems likely that the same sort of principle of requiring written explanations after the event applied in the Indian Civil Service.