[Title] see the note to page 77, line 31, and the article in KJ 44/118 by Kipling’s sister “Trix” where she ascribes the accurate depiction of Yorkshire dialect and geography to her father, Lockwood Kipling.

[Page 71, line 22] making roads an important job in this land of poor communications, both for movement of troops and of trade. The work was usually done by the Sappers and Miners (Royal Engineers) but if necessary, the infantry was naturally called upon.

[Page 71, line 25] Snider ORG says this rifle made a different “crack” from the Martini-Henry which replaced it and the softer bullet sometimes buzzed like a cockchafer or other flying beetle. Many rifles were stolen by the tribesmen who were expert thieves; See “The Man who Was” next in this volume and Ian V, Hogg, The Illustrated Encyclopaedia of Firearms, (Hamlyn, 1978) pp. 230 and 286.

[Page 72, line 2] Aurangabadis Aurungabad is a city north-east of Bombay in the Mahratta Hills in what was then the State of Hyderabad; but there were clearly some tribesmen from the hills in the regiment.

[Page 72, line 5] steaming presumably a hot night so his clothes would dry on him.

[Page 72, line 6] rainin’ intrenchin’ tools an entrenching-tool is a small pickaxe with a point at one end and a shovel the other. The usage here is an old joke for a very heavy downpour; the Naval equivalent is ‘raining capstan-bars’ !

[Page 72, line 32] colours in this context, the Queen’s Colour and the Regimental Colour which are regarded as the soul of the regiment and treated with great respect – see Notes to “Only a Subaltern” at page 104, line 28.

[Page 73, line 22] washing out his rifle according to the Manual this requires: “six to eight pints of boiling water” which is poured through a funnel inserted into the breech and is intended to remove the fouling that sticks to the rifling. This must have been difficult in the field where water and fuel might well be scarce.

[Page 73, line 30] Mixed Pickles a savoury concoction of various vegetables in a piquant sauce popular with the troops, but here used to describe a party of marksmen.

[Page 74, line 12] cousin the many blood-feuds on the frontier caused relations to shoot each other for no better reason that they inherited the feud from their forebears.

[Page 74, line 30] an army-corps Then, in the British army, a body of troops of uncertain number – perhaps a couple of divisions of infantry with supporting arms – artillery, cavalry, engineers, hospital, supply and headquarters unit etc., probably anything up to 20,000 or 30,000 men. Obviously an exaggeration here. The latter figure is called “an army” in the previous story.

[Page 75, line 1] T’aint’ not arf so bloomin’ dusty neither It is not half so blooming (a euphemism for bloody) dusty (bad) neither – a typical understated Cockney slang observation indicating approval of his surroundings!

[Page 75, line 11] seven hunder he estimates the range at seven hundred yards (640 metres) and then reduces it to six hundred yards because the air is so thin – his estimate is correct – see line 21 below.

[Page 76, line 3] gardeners a term of abuse ashore and afloat – used by a naval man in “Their Lawful Occasions” [page 140, line 7, in Traffics and Discoveries].

[Page 77, line 3] Happen there was a lass tewed up wi’ it ‘Perhaps there was a girl mixed up with it’ – Yorkshire dialect.

[Page 77, line 23] Don Juan the proverbial heartless and impious seducer who appears in stories, operas, plays and poems by various hands from about the mid – sixteenth century. [The Oxford Companion to English Literature (2nd. Ed, 1940) page 231].

[Page 77, line 24] Lotharius the heartless libertine (the Gay Lothario) in “The Fair Penitent” by Nicholas Rowe (1674-1718) and various works by others. Ibid. page 679. Again. two unlikely references to put into the mouth of a private soldier but see pp. 45-46 “The Courting of Dinah Shadd” where Mulvaney tells of his antics at Silver’s Theatre in Dublin, where he might have seen or even appeared in some of these pieces.

[Page 77, line 29] Rumbolds Moor Rumbles on some maps, rises south-east from Skipton (in Yorkshire) for ten miles, finishing thirteen miles south of Pateley Bridge. Kipling stayed with his grandmother at Skipton before he sailed for India in 1882. See Charles Carrington (page 42) and Angus Wilson (page 58). 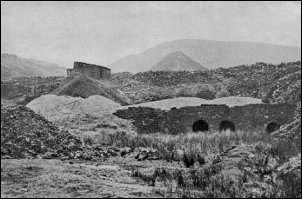 The photo is of part of the workings. The entrance to the mine is on the left. I was last there in 1946, but in 1929 …. I went up the level and into part of the workings that were fit to go into. The place where the engine was was certainly a big place but knowing Leeds Town Hall as I do, I hardly think it would fit in but that is neither here nor there, it had taken some hewing out. Another shaft goes down from there and spreads out into three other levels to cut the veins which with lead always run east and west.
[The remainder of this letter is published in ORG Vol 2, pp. 955/6]

[Page 78, line 5] kites birds of the genus Milvus, the scavengers of India.

[Page 78, line 23] drift a word of many meanings – in this instance a passage in a mine

[Page 78, line 33] sumph now usually ‘sump’ – in this context a drainage-pit in the mine that must have been large enough to admit a team of horses.

[Page 79. line 31] tram also called a ‘tub’ – in this instance a four-wheeled vehicle on rails used for removing material from a mine. (See note above)

[Page 80, line 25] Sick Club a form of locally organised insurance where workers in a mine, factory, etc. paid a weekly contribution to the Club, and received benefit when they were off work through sickness as their wages were stopped in those days before the Welfare State.

[Page 80, line 33] Solomons a reference to King Solomon, (c. 974 – c. 937 B.C.) King of Israel, famed for his wisdom; Proverbs and other Books in the Bible are attributed to him and he appears in several stories and verses by Kipling.

[Page 81, line 22] Primitive Methodist a religious communion formed in 1812 when the members broke away from the Methodist Church founded by John Wesley (1703-1791) and his brother Charles. The two Churches were reunited in 1933.

[Page 81, line 26] jealoused or jaloused – usually considered to be a Scottish expression for ‘suspected’.

[Page 83, lines 25-27] wherever I die …. Mulvaney likes the idea of a universal church that is the same all over the world.

[Page 83, line 29] neither high nor low etc an echo of the famous remark attributed to Dean Arthur Penrhyn Stanley (1815-1881) to the effect that the Church of England was ‘neither High nor Low, but Broad’.

[Page 84, line 3] shebeen an unlicensed liquor-shop, which sounds about right for the Mulvaney family, but he may have meant ‘shebang’ – a room, house or shop, etc.

[Page 88, line 14] arf-licence pub a public-house with a limited licence – probably only for beer, in what was then a poor district of South London.

[Page 88, line 19] Forders slang for cabmen, from Forder & Co., Ltd, coachbuilders of Wolverhampton and London, a famous company who built cabs and other horse-drawn vehicles, together with the bodies for motor vehicles.

[Page 88, line 28] throstle the thrush, a bird with a particularly beautiful song.

[Page 89, line 28] walked Dr. Warbotton’s horse up and down to stop him getting cold.

… great pity…
This villainous saltpetre should be digg’d
Out of the bowels of the harmless earth…
[Shakespeare’s King Henry IV, Part 1, Act 1, scene 3.]

[Page 91, line 6] Garstang’s Copper-hole possibly a pocket of copper discovered by a local miner of this name. [Information would be appreciated – Ed.]

[Page 91, line 9] plump in this context to drop or plunge with abrupt descent (OED), but now more usually ‘plumb’ – to measure a depth with a lead weight on a line.

[Page 91, line 22] timberin’ the cross-members that supported the timber lining of the shaft.

[Page 91, line 33 and overleaf] a sparrow, a spout and a thunderstorm ribald doggerel reproduced in The Peal, A Journal of Facetia (sic) and Voluptuous Reading for December, 1878, pretty puerile stuff which would probably be known to some contemporary readers

[Page 93, line 25] Bradford an important industrial city in West Yorkshire where Kipling’s father and his maternal grandfather went to school – see KJ 41/8 and KJ 83/12, together with The Pater by Arthur R. Ankers [Hawthornes Publications Ltd., 1988]. Also
Charles Carrington, pp. XXIII and 3 ff. for a family tree and some account of Kiplings Yorkshire background.

[Page 93, line 28] back end … another circuit in this context, the autumn; Barraclough was posted elsewhere by the Promitive Methodist Church.

[Page 94, line 12] clogs wooden footwear with iron fittings, commonly worn at that period and very noisy on the streets which were paved with granite ‘setts’.

[Page 95, line 32] rose to his knees he fires from the kneeling position.