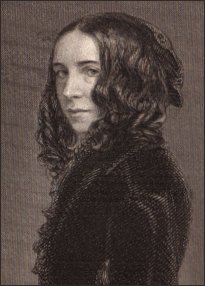 “E.B.Browning” Elizabeth Barrett Browning, (1806-1861). She was a popular and influential poet, and a campaigner against social injustices, in particular slavery and child labour. She was married to Robert Browning (above).

Lady Geraldine turns the wrong lever and goes through a shop-front, finishing up in the window with garments draped over her car. Rather surprisingly it happens that her cousin is the magistrate. However, he fines her with the prospect of prison if she does not pay. She pays. There is no respite in the harsh treatment of errant motorists.
Ann Weygandt (pp. 129/130) comments witheringly:

…it is “Aurora Leigh” that he chooses to parody in The
Muse among the Motors. “Lady Geraldine’s Hardship” is
not very amusing; it is hard to burlesque Mrs. Browning;
she has done it herself already. The brand of blank verse,
the parentheses and dashes, the mention of cousin Romney,
and the constant harping on the fact that the author is a
woman unjustly regarded by man, remind us effectually of
“Aurora Leigh”, but it is depressing even to think of that poem. It would require a very clever parody to reconcile us
to its presence in the series, and “Lady Geraldine’s Hardship”
is no more than competent.

I think Anne Weygandt is missing a point here. It may not be a particularly good parody of Elizabeth Barrett Browning—that’s a matter of opinion. But at a time (1919) when women’s suffrage was still an issue (just), and the standard view of a woman’s place being in the home was looking untenable, since women had shown themselves capable of tackling anything during the Great War, its message was as much about male chauvinism as the woman’s inability to drive.

To me there’s a ‘serve her right !’ feel about the fine. (C.f. the wonderful ‘Pont’ cartoon of the debby girl who’s just driven her car through a chemist’s window squawking at the indignant owner “Can’t you TRY to get it into your head, you stupid man, that I’m only a learner ?”)

Personally I think the ‘piteous baby-caps’ strewed over the car’s radiator is a good touch and funny – though I do find the last 6 lines a bit dull. I suppose inflation is the reason , one has to do arithmatic to see why a £10 fine was so rotten.

Notes on the text.

Lady Geraldine will be the daughter of a Duke, an Earl or a Marquis whose younger children take the title of Lord (or Lady) Christian name and surname. Had she married a younger son of the above she would take her husband’s Christian name as Lady James.

[Line 4] agent in this context the man who sold her the car.

[Line 7] mazed with gauds to catch a man The car was festooned with women’s clothes from the shop.

[Line 10] the bench in this context the magistrate

[Line 11] forty-shillinged law a fine of £2 in pre-decimal days. A common penalty for minoe offences.

[Line 12] the Woman’s oversoul It was a common thought in Victorian times that despite their inferior position in society, women had ‘higher souls’, greater sensibility. A glance at Emerson, perhaps ?

[Line 17] Ten pounds or seven days In this case, because she was a woman, the magistrate exacted the heavy sum of £10, five times what a man would expect to pay, with the alternative of a week in prison.