The speaker lived in the Tropics when he was a little boy and knew Fireflies and Coca-palms and the Southern Cross. But that was so long ago that he ‘dreamed that they were dead’ . In the last verse he goes back, and to his delight finds that they are all alive and real. 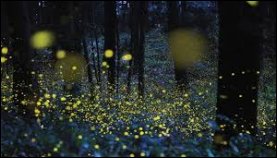 a Firefly Lampyridae, a family of winged beetles, called fireflies or lightning bugs for their conspicuous use of yellow, green, or pale red light to attract mates or prey. They can make a fine display on tropical evenings. 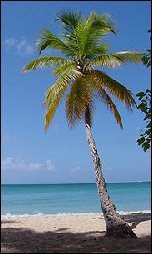 a Cocoa-palm The coconut palm (Cocos nucifera) is a member of the palm family. It is the only species in the genus Cocos, and grows to 30 m tall. Kipling spent the first five years of his life in Bombay (now Mumbai). Looking back at the end of his life he said (Something of Myself p. 2):

I have loved the voices of night-winds through palm or banana leaves.

as the nuts began to tumble ‘When the wind blew the great nuts would tumble, and we fled – my ayah, and my sister in her perambulator – to the safety of the open.’ They were right to be afraid – a fresh coconut in its outer wrappings can weigh 1.5 kg. 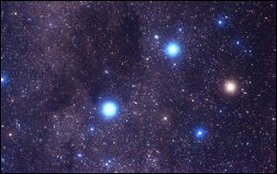 the Southern CrossThe constellation, opposite Cassiopeia in the North, that rises over the horizon as one moves south across the Equator; a sign for seagoing travellers that they are in the Tropics. Kipling writes in the “The Long Trail” ::

Then home, get her home, where the drunken rollers comb…
And the Southern Cross rides high!
Yes, the old lost stars wheel back, dear lass,
That blaze in the velvet blue.
They’re all old friends on the old trail, our own trail, the out trail.
They’re God’s own guides on the Long Trail – the trail that is always new.

a Coal-sack on his shoulder The Coalsack is a seemingly starless dark patch of sky in the southern part of the constellation of the Southern Cross. It is actually an opaque interstellar dust cloud that obscures the light of the background Milky Way stars.