First published in the Strand Magazine in London. in May 1924, and later in the New York World. Collected in:

This light-hearted poem was composed when the Kiplings were on holiday in France in the Spring of 1923. This was their fourth postwar trip, though they had made similar tours before the war, as Charles Carrington (p. 414) notes:

Every January from 1909 until the outbreak of war they travelled by steamer and train to Engelberg or St. Moritz … Then, when John had returned to school, the other three toured the Continent.

By the end of the month [March 1923] the author felt fit enough to sail, via Gibraltar, to the Mediterranean port of Toulon, where his chauffeur Taylor met him with the Duchess (all the Kiplings’ Rollses were now called the Duchess)…

Along the way he amused himself with composing “A Song of French Roads”, which applauded the French (Napoleonic, indeed) genius which had created the orderly system of routes nationales. 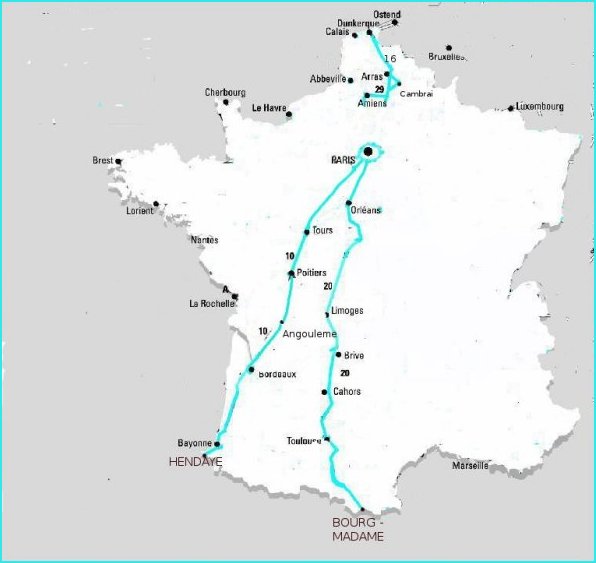 “The National Roads of France are numbered throughout, and
carry their numbers upon each kilometre stone. By following these indications, comprehensible even to strangers …” the quotation from a French guide-book that inspired the poem.

So numbered by Napoleon The numbering system of the Routes Nationales, one of the first in the world, was introduced by Napoleon on 16 December 1811

These verses describe the numbered roads in northern France where the British fought in the Great War.

Mont Louis A mountain in the Pyrenees in south-west France near Bourg-Madame.

the Landes an area of pine-forest south-west of Bordeaux.

Versailles a suburb south-west of Paris and the site of one of the great palaces of France.

Blaye a small town in the wine region of Bordeaux

Langon a small town in the Landes

ninety to the lawless hour lawless indeed – three times the legal limit! In 1923 the speed limit in France was 30 km/hr in open country and 20 km/hr in built-up areas. 90 km/hr seems to have been the magic figure for Kipling about that time.

In his story “The Bull that Thought” published in 1924, Kipling tests his car on a road ‘westward from a town by the Mouths of the Rhone … so mathematically straight, so barometrically level, that it ranks among the world’s measured miles and motorists use it for records.’

They make the run at night, perhaps to avoid the police. A distinguished Frenchman who comes as an observer has had a bet with the chauffeur (Kipling never drove himself). “I bet him – ah – two to one she would not touch ninety kilometres. It was proved that she could.” (Debits and Credits, p. 210).

Fontarabia Now Hondarribia. The first town in Spain going south from from Hendaye.

Bidassoa The river which forms the boundary between France and Spain.