This poem, listed in ORG as No 908, was first published on the title page of Collected Verse on October 28th 1907, in the United States.

The poet is musing on the hearths he has had in his various homes, on the importance of the hearth to a man’s home, and of the home place to all men.

Working in India he had not had his own place, lodging with his parents in Lahore, and in Allahabad mainly at the club and with the Hills until he left India. In neither place would there have been a fire on the hearth. In London until 1892 he had bachelor rooms in Embankment Chambers. In Vermont after his marriage and honeymoon, he built Naulakha, the first house of his own, much loved. Back in England from 1902 he acquired Bateman’s, the ‘Very Own House’, where the Kiplings put down their roots, though they hated the English Winters, and spent many of the cold months down at the Cape, in “The Woolsack”, another greatly loved house that Cecil Rhodes gave them. 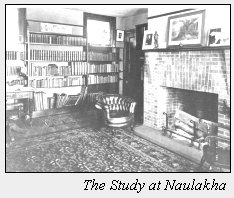 Kipling was very sensitive to houses, and to the ancient magic of the hearth. In “They”, the story of a blind woman living in a beautiful old house, haunted by the ghosts of dead children, it is while sitting by the fire that he finds his lost little daughter.
But he was not a man to spend much time by the fireside, around the table with old friends perhaps, after a day’s work, but above all in the study. It was work that drove him, and satisfied him. Above the fireplace in his study at Naulakha his father had inscribed a passage from the New Testament: “The Night Cometh when no Man can Work”.(John 9,4). He was really writing here about other men’s fires.

roof-tree the horizontal member that forms the apex of a pitched roof. Here used poetically to describe the whole building..

Four Winds in Ancient Greek myth the Anemoi were gods of the wind, each having a cardinal direction from which it blew, each associated with various weather conditions: Boreas (North Wind), Notus (South Wind), Zephyrus (West Wind) and Eurus (East Wind).

every quarter of mankind Kipling had lived in India, the United Kingdom, the United States of America, and South Africa.