The poem as printed here is collected in the Outward Bound, De Luxe, Sussex and Burwash Editions.

It was also published in the United Services College Chronicle, no. 16, for 15 October 1883, with the subheading ‘As sung by one of them’ and signature “Gigs”. This version has an additional seventh verse:

Sunt quos curriculo pulverem Olympicum/ Collegisse juvat.
There are some whom it delights to gather Olympic dust upon the racing chariot.
Kipling added an explanation ‘tat: a country pony’.

According to Beresford ( ‘M’Turk’ of Stalky & Co.) Kipling’s nickname at school was “Giglamps”, referring to his glasses, but for everyday use it was shortened to “Gigs” or “Gigger”. (Schooldays with Kipling p. 3). 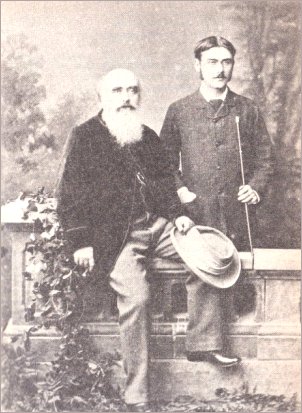 There is yet another version in the Library of Congress in Washington D.C. This was handwritten by Kipling, dated 3 November 1883 and signed ‘R.K.’, on the back of this photograph of Kipling and his father, which was sent to Dunsterville (“Stalky”) in 1884. This version includes the extra verse above, omits the ninth verse in the poem as printed here, has some minor variants (see Notes on the Text below), and adds a twelfth verse:

Scarce healed from prefectorial stripes
For “powers to flog” we beg;
And lips, yet moist from College “swipes”
Drain deep the whisky-peg.

powers to flog: one of the first privileges of a young police-officer.

As one of the many ex-pupils of the College now in India, Kipling meditates on their various locations and occupations. In the last verse they all remember their schooldays. 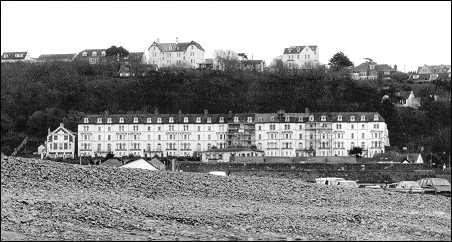 India’s coral strand see Bishop Heber’s hymn, familiar to members of the Anglican church of old, and to many a British public-schoolboy in Kipling’s day and after:

From Greenland’s icy mountains,
From India’s coral strand,
Where Africa’s bright fountains
Roll down their golden sand,
From many an ancient river,
From many a palmy plain,
They call us to deliver
Their land from error’s chain.

O.U.S.C. an ‘old boy’ of the United Services College.

the flashing signal the heliograph, in which a mirror flashed the sun’s rays and could be used to send Morse code. See “A Code of Morals” .

Northam the nearest village to the College, about two km away, on the tidal estuary of the River Torridge.