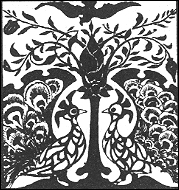 [Page 57, initial] This is an Islamic-style design, recalling the tiles of William de Morgan, whose studio Kipling was taken to visit as a boy [Something of Myself, p. 22].

[Page 58, lines 11-2] Precession of the Equinoxes The equinoxes, vernal on March 20th and autumnal on September 22nd or 23rd, are the two times in the year when the sun crosses the equator, and day and night are consequently equal as the word implies. Their precession is defined in Chambers Dictionary [2003] as:

a slow westward motion of the equinoctial points along the ecliptic, caused by the greater attraction of the sun and moon on the excess of matter at the equator, such that the times at which the sun crosses the equator come at shorter intervals than they would otherwise do.

Kipling seems to use the expression here for its sound rather than its specific meaning.

[Page 58, lines 27-8] great grey-green, greasy Limpopo River, all set about with fever-trees According to ORG, the Limpopo, or Crocodile, river is over 1000 miles in length. Next to the Zambesi, it is the largest river of Africa entering the Indian Ocean. Its basin includes the northern part of the Transvaal, the eastern portion of Bechuanaland (now Botswana) and a large area of Mozambique.

Kipling’s description is rather long for a Homeric epithet; but does one hear behind its rhythm the beat of African drums? See also Rabelais, [Gargantua et Pantagruel Bk. I, ch.1] where Gargantua’s genealogy is found in:

Kipling greatly respected Rabelais: see “The Last of the Stories” (1889; collected in Abaft the Funnel and Uncollected Prose, Sussex and Burwash editions).
Acacia xanthophloea is a large deciduous thorn-tree, known as the “fever-tree” because it grows in marshy places and was erroneously believed to carry malarial infection.

[Page 51, line 1] (little short red kind) This and other descriptions in parentheses in this sentence are not in the original Ladies’ Home Journal version of the story.

[Page 61, line 12] crocodile tears Hypocritical grief, from the legend that crocodiles wept as they ate the creatures they had killed.

[Page 65, line 28] double-clove-hitch A clove hitch is a sailor’s knot used to attach one rope to another of greater thickness, or to secure a rope to a post or spar.

[Page 73, line 1] nobody spanked anybody any more For this in the Ladies’ Home Journal: “everybody started fair.”