[Page 216, Heading] The prose heading is quoted from The Histories of Gargantua and Pantagruel, Book II, Chapter 10 by François Rabelais (1494-1553). This describes one of Pantagruel’s activities in Paris.

[Page 217, line 5] Lât Sahib or Lord Sahib. In this case the senior person, who was Sir Steuart Bayley on this occasion. (See also John McGivering’s notes to “Tod’s Amendment”. 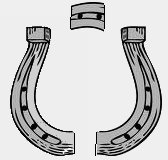 [Page 217, lines 21 & 22] Sir Steuart Bayley occupies the frog of a badly made horse-shoe split at the toe. Sir Steuart was located in what would be the open (or heel) end of the horse-shoe with the Councillors on the U-shaped curves of the shoe which has an opening or gangway between the two halves.

[Page 218, line 11] black alpaca a cloth made, or like that made, from the wool of the Peruvian Alpaca (Vicugna pacos) a llama-like animal.

[Page 219, line 21] the Sphinx an enigmatic colossal statue of a lion with a human head, which has been eroded by the years, among the Pyramids in Egypt. The Greeks have a female version who killed herself when Oedipus answered her Riddle correctly. It is not clear which mythological creature Kipling had in mind; but Sphinxes have become symbols of anything puzzling and mysterious. 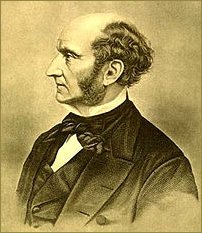 [Page 220, line 1] John Stuart Mill (right) English Philosopher, economist, Member of Parliament, advocate of women’s rights, and one of the great philosophers of Liberalism. Amongst his books were The System of Logic and On Liberty (1806-1873).

[Page 220, lines 6 & 7] old Sabha, Anjuman, voluntary organisations. The Sabha were basically Hindu whilst the Anjuman were Muslim. They were structured on the lines of those of the British with officers, budgets, annual general meetings, etc. The Indian Parliament is called the Lokh Sabha. 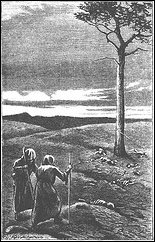 [Page 220, line 19] upas tree Antiaris toxicaria native to southeastern Asia. The tree (left) is fabled for its ability to poison all life around it.

[Page 220, line 22] banian or banyan tree. East Indian tree that puts out aerial shoots that grow down into the soil forming additional trunks. It provides a well-shaded resting place.

[Page 220, line 28] ‘tied and bound with the chain of our (own) sins.’ (See the Book of Common Prayer (Church of England) – Prayers and Thanksgivings upon several occasions– for instance in the time of any common Plague or Sickness. [ORG]

[Page 222, line 1] ‘cuttle-fish trick’ the common cuttle-fish (ink-fish) has the power of ejecting a black fluid so as to darken the water and conceal itself. [ORG]

[Page 222, line 30] Babu a Hindu gentleman in its respectful meaning.

[Page 223, line 16] Local Self-Government A report for the United Nations Economic and Social Commission for Asia and the Pacific describes the history of local self-government in India thus.

Local government institutions have always existed in India in one form or another since ancient times. The present form of urban local government owes its genesis to the British rule. The initiation began with Samuel Laing, member of the Viceroy’s Council, in the Budget Speech (1861-62) proposing that local services should be based on local resources. Lord Mayo’s Resolution of 1870 introduced the concept of elected representatives in the municipalities. Lord Ripon is considered the founding father of urban local government as he implanted the concept of municipal authorities as units of self-government. His Resolution of 18 May 1882 on local self-government dealt with the constitution of local bodies, their functions, finances and powers and laid the foundation of local self-government in modern India. Local self-government played an important role in the Independence Movement.

[Page 224, line 11] In the election for the House of Commons, plurality, etc. Plurality of votes refers to the possibility of having two votes, one as an individual and one as a members of an organisation. 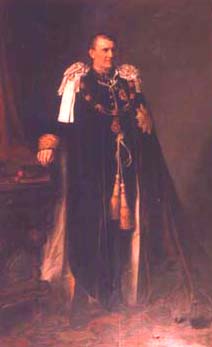