[Page 201, line 2] The Ditch Hobson-Jobson describes this Mahratta Ditch and its history:

An excavation made in 1742, as described in the extract from Orme below, on the landward sides of Calcutta, to protect the settlement from the Mahratta bands. Hence the term, or for shortness ‘The Ditch’ simply, as a disparaging name for Calcutta [and its European citizens]. The line of the Ditch corresponded nearly with the outside of the existing Circular Road, except at the S.E. and S., where the work was never executed.

1742.—“In the year 1742 the Indian inhabitants of the Colony requested and obtained permission to dig a ditch at their own expense, round the Company’s bounds, from the northern parts of Sootanatty to the southern part of Govindpore. In six months three miles were finished: when the inhabitants…discontinued the work, which from the occasion was called the Morattoe ditch.”
[Robert Orme, History of the Military Transactions of the British Nation in Indostan, 1778, 1803 edition, Vol ii. p. 45.]

This suggests that the ‘Ditch’ is what is termed the ‘Circular Canal’ in Constable’s 1893 Hand Atlas of India, Plate 38.

[Page 201, line 10] Hughli Bridge this was a floating bridge over the river at the time of Kipling’s visit, used to cross between Howrah and Calcutta. [ORG]

[Page 201, line 12] Howrah Station a terminus of the East Indian Railway on the Western bank of the Hughli. The Grand Trunk Road also passes through Howrah.

[Page 201, line 16] Graphic this was an illustrated weekly periodical, similar to the Illustrated London News. [ORG]

[Page 203, line 20] what a heavenly place to loot! exclamation attributed to the great Prussian soldier Marshal Blucher (1742-1819) on his first visit to London. [ORG]

[Page 203, lines 29 & 30] the Big Calcutta Stink Kipling was becoming known for his strong views on sanitation, or its general lack, in India. In his journey to Rajputana (Nov.-Dec., 1887, Letters of Marque, Chap IV) he devoted several pages to the excellence of the Jeypore Municipal infrastructure.

[Page 204, line ] assafoetida Ferula asafoetida (family Umbelliferae), is a resin gum which comes from the dried milky sap of the stem and roots of the wild fennel genus Ferula. The fresh resin is greyish-white, but dries to a dark amber colour that has foul smell. 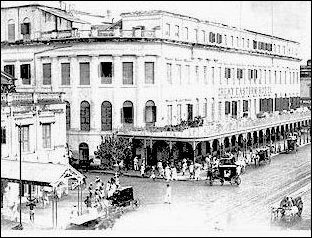 [Page 204, line 7] Great Eastern Hotel the best-known hotel in Calcutta at that time (right) and still in business. It is located just back from The Strand at 1-3 Old Court House Street, opposite Government House, just down from Dalhousie Square.

See the Frontline web-site for more photographs and a history of the hotel, with a quotation from this chapter of Kipling’s report.

[Page 204, line 13] maidan Hindustani word from the Persian for a battlefield, parade ground or open plain. [ORG] The area lies at the southern end of Calcutta and includes Fort William and the racecourse.

[Page 204, line 15] Chowringhi or Chauringhi Road is a main road through Calcutta. Its name comes from a previous village, the alignment is roughly north and south along the eastern edge of the maidan. [ORG]

[Page 204, line 16] Bengal Club one of the earliest in India, it is near Fort William and opposite the maidan. It has encouraged the study of oriental subjects. [ORG]

[Page 204, line 21] Lal Bazar This street runs from the northeast corner of Dalhousie Square and joins Bow Bazar Street (renamed Bepin Behan Banguly Street). It is a short distance inland from the waterfront and the Import and Export Jetties and thus very convenient for sailors in need of a drink or three. The Calcutta Police Headquarters is still located on Lal Bazar Street.

For a detailed modern layout, see this Calcutta web-site. 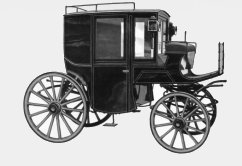 a brougham (left) was an enclosed carriage drawn by one horse with fewer windows than a coach. 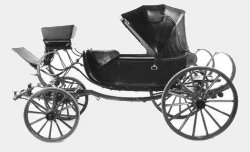 A barouche (right) was a summer vehicle drawn by two horses with only one hood over the back seat. See the glossary of horse-drawn carriages on the web-site of the Kinross Carriage Works in Stirling in mid-Scotland.