An interesting example of Kipling’s skill in reworking a subject at different times and for different markets can be seen by comparing “On the Banks of the Hughli”, Chapter IV of The City of Dreadful Night published in 1888 as one of the Indian Railway Library green covered paperbacks, with his story “An Unqualified Pilot”, one of the brilliant little tales in Land and Sea Tales for Scouts and Guides…

Both these typically descriptive and perceptive pieces are Kipling at his very best and both evoke the power and danger of the mighty river and the skill of the pilots who brought shipping up to Calcutta. But “An Unqualified Pilot”, being for young people, is written in a simpler and tighter style than “On The Banks Of The Hughli”. Kipling was never profligate with words but he pared his writing down even more carefully as he got older. 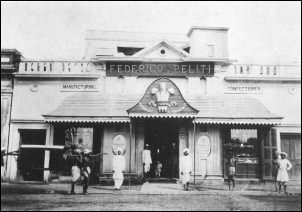 [Page 226, line 4] office-jauns Hobson-Jobson records that a jaun is a term used in Calcutta and occasionally in Madras. It was defined by Sir G. Haughton as: ‘a vehicle, any means of conveyance, a horse, a carriage, a palkee.’

[Page 226, line 9] ‘Honest Bombay Jack’ the [ORG] Editors expressed surprise to find someone using “Bombay” in advertising his wares in Calcutta, since the two cities have always been rivals. [ORG]

[Page 226, line 10] cheroot Hobson-Jobson defines this as: ‘a cigar; but the term has been appropriated specially to cigars truncated at both ends, as the Indian and Manilla cigars always were in former days.’ There is another reference in From Sea to Sea Vol. I (1889), Chapter XXI, p. 456, line19) :

…Above all, he should bring with him thousands of cheroots—enough to serve him till he reaches ’Frisco. Singapur is the last place on the line where you can buy Burmas. Beyond that point wicked men sell Manila cigars with fancy names for ten, and Havanas for thirty-five, cents. No one inspects your boxes till you reach ’Frisco. Bring, therefore, at least one thousand cheroots.

[Page 227, line 4] braces supports for holding up a pair of trousers. The American term for them is ‘suspenders’.

[Page 227, line 9] Ganymede In classical Greek mythology he was carried into heaven at the command of Zeus and became cup-bearer to the gods. [ORG]

[Page 227, line 16] German barque a sailing vessel with three or more masts, square-rigged on all but the aftermost (mizzen) which carried fore-and-aft sails. The port of registry would have been in Germany.

[Page 227, lines 29 & 30] fouled her own chain with her forefoot became entangled in her own anchor chain, where the stem (bow) of the vessel was joined to the keel.

[Page 228, line 11] Fairlie Place about one block north of Lal Bazar, in the vicinity of the Import & Export Jetties.

[Page 228, line 17] Sandheads a location at the mouths of the Hughli river, about 70 miles downstream from Calcutta.

[Page 228, line 31] Lancer-regiment of masts not only packed together as were the lances in a regiment on parade, but also flying small house flags in harbour. [ORG]

[Page 230, line 7] Babus Here Kipling is using the term simply to denote Indian clerks as opposed to the usage in Chapter III, page 222, line 30, which refers to Hindu gentlemen.

[Page 230, line 21] steamer have her three masts razed to deck level In 1888 there were many steamships (right) still fitted with masts and sails in case they had insufficient coal to reach their destinations.

[Page 231, line 1] Govindpur a ship named after one of the village sites on which Calcutta was built. [ORG]

These were originally African Muslims from Zanzibar, the large island off the coast of East Africa. (see the entry for ‘Seedy’ in Hobson-Jobson).

Kipling also refers to them in “The Limitations of Pambé Serang” (Life’s Handicap p. 343 line 11) and in the poem “The Lost Legion” (collected in The Seven Seas, verse 3, line 4).

[Page 231, line 30] serangs Hobson-Jobson defines these as native boatswains or chiefs of a lascar (Indian sailor) crew. Kipling writes of serangs in two of his stories, “The Limitations of Pambé Serang” (Life’s Handicap), and “The Bridge-Builders” (The Day’s Work):

… A serang is a person of importance, far above a stoker, though the stoker draws better pay. He sets the chorus of ‘Hya! Hulla! Hee-ah! Heh!’ when the captain’s gig is pulled up to the davits; he heaves the lead too; and sometimes, when all the ship is lazy, he puts on his whitest muslin and a big red sash, and plays with the passengers’ children on the quarter-deck. Then the passengers give him money, and he saves it all up for an orgie at Bombay or Calcutta, or Pulu Penang. [“The Limitations of Pambé Serang”, Life’s Handicap p. 343 line 22]
… He was a Lascar, a Kharva from Bulsar, familiar with every port between Rockhampton and London, who had risen to the rank of serang on the British India boats, but wearying of routine musters and clean clothes, had thrown up the service and gone inland, where men of his calibre were sure of employment. For his knowledge of tackle and the handling of heavy weights, Peroo was worth almost any price he might have chosen to put upon his services … [“The Bridge-Builders”, The Day’s Work p. 6 line 11]

[Page 232, line 31] Colootollah or Kalutala Street, one block north of Lal Bazar and Bow Bazar Street. Not unexpectedly, this area just inland from the docks was a ‘red-light district’. The area is also mentioned in the next chapter (V, “With the Calcutta Police”).

[Page 235, line 11] Kintals thought to be a Calcutta term for “slums”. An article in The Telegraph of Calcutta for 8th July 2007 records that:

In 1909, a British writer H.E.A. Cotton first observed the Kintals —the Creole population descending from African slaves and Portuguese soldiers — fading away. The Kintals were here from the time emperor Shah Jahan’s storm-troopers razed the church at Bandel in 1640…

The British assigned separate quarters within the palisades to more than 2,000 ebony-skinned Kintals, finding them “a serious incumbrance to the garrison”, during the siege of Calcutta in 1756.