First published in the National Observer on February 4th 1893. Listed in ORG as No 562.

This is one of Kipling’s works for which he was deeply indebted to his father Lockwood Kipling:

A Bengal legend tells the pitiful fate of a Hindu Raja, the last of his race, attacked by Muhammadan invaders. He went bravely out to meet them, carrying with him a pigeon whose return to the palace was to be regarded by his family as an intimation of his defeat, and a signal to put themselves to death and to burn their home. He gained the victory, but while he stooped to drink in the river after the fatigues of the battle, the bird escaped and flew home. The Raja hurried after, but was only in time to throw himself on the still burning pyre.
[Chapter 2, “Of Birds”, in Beast and Man in India p. 45]

His father’s Beast and Man in India also supplied the plot for the poem “The Legends of Evil II” and the uncollected story “Collar Wallah and the Poison Stick”.

Daniel Hadas notes: ‘If there is a historical figure behind the legend, it is presumably Daud Khan Karrani.  [D.H.]

The critics have largely ignored this piece, except to note what Kipling was paid for it in comparison with what he was commanding from other journals. Charles Carrington (p. 211) says:

Rudyard was still sending occasional contributions to The National Observer which kept its head just above water. Henley could not afford to pay more than fifteen guineas for “The Dove of Dacca”…. It now seemed a poor return for an author who already commanded $100 per thousand words for his prose. Scribners gave him $500 for “M’Andrew’s Hymn”, a record price for a poem in America.

Kipling did, however, feel a debt of gratitude to W E Henley for his friendship and support when he was first making his way in London. This was not so strongly felt by Mrs Kipling, who managed the family finances. Andrew Lycett (p. 260) quotes her angry reaction:

Carrie was almost insulted when the National Observer sent fifteen guineas for her husband’s poem ‘The Dove of Dacca’: ‘better nothing at all’, she wrote in her diary.
[April 22nd 1893]

Moslem kings this reference dates the story to the reign of Emperor Akbar (1556-1605) who extended Mughal rule into Bengal. It would seem that only the palace was destroyed, because the city of Dacca (now Dhaka) became the capital of Mughal Bengal in 1608. 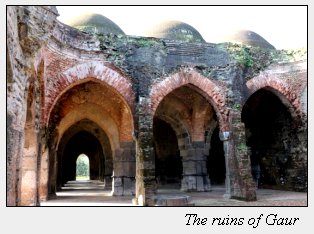 Gaur one of the largest medieval cities in the Indian subcontinent, capital of the Hindu State of Bengal from1450 to 1575 when it was deserted because of plague and never re-occupied.