[Page 1, line 1] The Brothers of the Trinity The Corporation of Trinity House has been primarily concerned with the well being of seafarers since Trinity House was granted a Charter by Henry VIII in 1514, and they report three contemporary functions on their web site:

St Catherine’s Lighthouse is situated at Niton Undercliffe, 5 miles from Ventnor on the Isle of Wight, and comprises a white octagonal tower with 94 steps up to the lantern. The main light, visible for up to 30 nautical miles in clear weather, is the third most powerful light in the Trinity House Service, giving a guide to shipping in the Channel as well as vessels approaching the Solent.

St. Cecilia was a Roman virgin and martyr of 176 A.D. who was patron saint of music. St. Catherine, a saint of the third century, was beheaded in 307 A.D. after other methods of putting her to death had failed—including that of being broken on the wheel (later named after her).

[Page 2, line 12] Lloyd’s Agency Lloyd’s, the London corporation handling all forms of insurance other than life insurance, at one time maintained coastal signal stations to collect nautical intelligence. When Kipling visited the Isle of Wight, there was one a half-mile east of St. Catherine’s Light.

[Page 3, line 22] before he’s hurt One convention makes ships feminine, but both Navy and merchant ships’ personnel routinely refer to the captain of a ship by the name of the ship, much as “Cornwall” could mean the Duchy or the Duke. Hence, when one thinks about a ship’s manoeuvering, it can take on the gender of the intelligence controlling it.

[Page 4, line 26] Hugli The river on which Calcutta is built. It is one channel from the Ganges to the Bay of Bengal.

[Page 4, line 27] Hugli pilot Strong tidal currents and frequent changes in the Hugli channel demand a high degree of skill, vigilance and nerve in the pilots who handle it. [See “An Unqualified Pilot” in Land and Sea Tales for Scouts and Guides.]

[Page 4, line 29] ship’s chains small platforms, one each side of a ship’s forecastle, projecting over the sea, on which a leadsman stood when taking a sounding with the hand lead and line.

[Page 4, line 28] Gosport Hard Gosport lies to the west of Portsmouth, across the harbour. A hard is a road, usually sloping, across or along the foreshore.

[Page 4, line 30] Javva the spelling indicates a mispronunciation of “Java”.

[Page 6, line 1] five knots an hour this became a solecism in the 1890s. “Five knots” by itself now means “five nautical miles per hour.” A nautical mile is now officially 1.852 km.

[Page 6, line 3] Eastern Archipelago there is an 1893 Dutch map on a University of Texas web-site indicating shipping routes in this area.

With a little imagination, most locations can be found. The ORG says the “Eastern Archipelago” may stretch from the Celebes sea to the Solomon Islands. Note “Lobetobi” at the southern end of Flores strait, above. There seems to be no “Wiri” or “Wurlee”, however, though there is a village named “Larontacko” in the right location.

[Page 6, line 4] Gulf of Boni from Cape Lasowa, runs 200 miles north into the south coast of Celebes with a minimum width of 30 miles. “Celebes” is now “Sulawesi.”

[Page 6, line 6] Bali Narrows between Bali and the east end of Java.

[Page 6, line 14] for all Jamrach’s an emporium in the east end of London near the Docks at that time. They imported wild animals, etc., for zoos and circuses.

[Page 6, line 19] Flores Strait Flores Strait lies between Flores Island on the west and Adonare and Solor Islands on the east.
Adonare Island easily located as the northern of the two islands east of Flores on the Dutch map cited above, which also shows the passage and, to the east, north of Timor, “Ombai” passage (see line 28).

[Page 7, line 1] Wurlee a village on the Larantuke Narrows on the north-west coast. 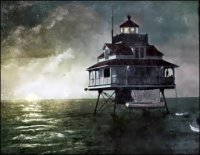 Intermediate between the lighthouse erected on the shore and that stately shaft built on an outlying rock, is the mongrel edifice known as the pile-lighthouse; . . . It is generally constructed of wood or iron . . . the habitable part of the building and the lantern resting on long spider-like legs. . . .
(Lights and Tides of the World, 1866).

As the legs support the structure over the sea, it would be easy to see through gaps in the planking directly down into the water; this would not, of course, be possible with the ordinary tower.

[Page 7, line 24] hogwash kitchen swill for feeding pigs. ‘The sea is often called “the hogwash” by seamen, usually abbreviated to “oggin.” Not found in Partridge or OED but I remember it from the 1940s and consulted three of our fishermen today who agree the expression is still in use.’ [J McG]

[Page 7, line 27] a Kling a term used in the Malay Peninsula for people of Indian origin.

[Page 8, line 9] Skipping about the beach along with the tigers The ORG wonders whether there were tigers in this area and, if there were, whether they’d spend time on the beach. A map at Wikipedia shows the tiger’s range as extending only as far east as Bali in 1900.

[Page 9, line 10] nesty the streaks are long and straight, so their ‘nesty’ quality is unclear except perhaps by way of a nest’s holding power. The word has been read as a misprint for ‘nasty’, but this spelling is retained in the Sussex Edition, which suggests that the spelling was intentional.

[Page 9, line 16] Ryde a seaside town on the north coast of the Isle of Wight off the coast of southern England, facing Portsmouth across Spithead.

[Page 10, line 23] Two-streak cargo-boat ORG has a lengthy note speculating on this ship’s registry, but the story seems to care only about its streak-production.

[Page 10, line 24] make her northing get far enough north to have wind and sea behind her.

[Page 11, line 9] the half-flood there are normally two tidal cycles in a day and fifty minutes. The half-flood is the stream that is making at half-time between low water and high water, not the low tide between two high waters.

[Page 12, line 4] thwartways across the ship from side to side.

[Page 12, line 14] the turn of the monsoon the East Indies are too near the equator to have a real monsoon.

[Page 12, line 22] the sea brimed ORG suggests a meaning of ‘brim-ful’ or ‘brimmed’ with wrecks. This Editor finds the phrase opaque.

[Page 12, line 30] turn a spoke the steering wheel is understood.

[Page 14, line 9] riding-lights the white lights, forward and aft, shown by a vessel at anchor.

[Page 14, line 16] snifting a snifting valve is an air escape valve in a steam engine cylinder.

[Page 14, line 26] block-buoyed marked with buoys to show that the channel is closed.

[Page 15, line 4] Probolingo a village on the Madura Sea, about 40 miles south-east of Surabaya. See map above.

[Page 15, line 5] Batavia Now Jakarta, on the northeast side of Java.

[Page 15, line 12] Britomarte The female knight of chastity in Spencer’s Faerie Queen.
Macassar Roads the anchorage off the town of that name in Celebes. ‘Mangkasar’ on the Dutch map cited above.

[Page 15, line 13] Fort Rotterdam situated close to the south of Macassar.
Amboina named after an island in the South China Sea.

[Page 15, line 18] Angelica Shoal an atoll to the north west of Dowse’s light.

[Page 17, line 17] Stand on and off sail alternatively towards and away from shore so as to keep a point in sight.

[Page 20, line 6] I saw a ship a sailing from a 16-line nursery rhyme first recorded 1846. See the Oxford Dictionary of Nursery Rhymes.

[Page 21, line 28] Fratton one of the districts in Portsmouth.

[Page 22, line 16] wherryman a wherry is a shallow light boat. At that time there were still boatmen plying for hire in the harbours — water taxis as it were.