First published as ‘L’Envoi’ with Soldiers Three in December 1888. The ORG (347) suggests that there may have been eleven other uses by Kipling of the title ‘L’Envoi’.  The poem was subsequently titled ’A Dedication’ in Songs from Books (1912) with the subtitle ‘To Soldiers Three’.  It was later collected in: 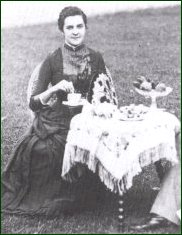 It is assumed that the dedicatee was Mrs Edmonia (Ted) Hill (left),  who with her husband had befriended Kipling when he moved to Allahabad in 1887 to work on the Pioneer. As Professor Pinney comments, no other candidate is known.

The ruby and the pearl are recognised in The Bible as linked with wisdom; the ruby as the precious stone of kings, while the pearl is associated with queens. (Job 28:18)

The structure of the verse is certainly consciously artistic. The rhyme scheme for each stanza is ABBCAC, which is often recognised as the ‘Wordsworth sestet’( as found in such sonnets as ‘London, 1802’). However, the lines scan as iambic tetrameter rather than pentameter. The sestet is a recognised form for love poetry.

Notes on the text.

Ruby At the time of first publication (1888) there would have been much discussion in Allahabad of new regulation of the mining and use of rubies in Mogok, Upper Burma.

stouter In the first editions (Indian and English) of Soldiers Three this was entered as bolder.

Pearl The straits between Sri Lanka (Ceylon) and the Madras coast had been a centre of pearl fishery for thousands of years. The divers, or palavar would free-dive, using a stone weight, fifty feet or more.

wrought The first Indian edition of Soldiers Three has made.

In both Indian and English first editions of Soldiers Three, this is For.banishment. Kipling had moved from Lahore to Allahabad in late 1887, leaving his family and the Civil and Military Gazette for the Pioneer..

Heart of my heart Kipling uses this form in other works (‘The Ballad of the King’s Jest’) without implication of deep personal feelings.