At the Imperial Conference of Prime Ministers held in London in May 1907, the main topic was the establishment of a permanent secretariat to deal with common issues during the four-year gap between formal gatherings. Kipling was encouraged to visit Canada to boost the imperialist cause in centralizing control over the colonies (now called dominions), because Canada’s Prime Minister had opposed the notion, fearing that such a structure would serve to institutionalize British control.

To ease Rudyard and Carrie’s continental travels, Sir William Horne, President of the Canadian Pacific Railway, laid on a special private car, decorated in green velvet and mahogany, which could be hitched to the back of any train, and in such style the couple made their way across the prairies to Vancouver and back, stopping in the three-week odyssey at major towns – Ottawa, Toronto, Regina, Calvary, and Vancouver – where the author gave keynote speeches to the local Canadian Clubs, as well as addresses at some Canadian universities.

Kipling’s lectures mixed rousing calls for unity in the imperial ‘family’ with homespun philosophy, and he collected a few of them 21 years later in A Book of Words, including Values in Life (delivered at McGill University, Montreal, 17 October 1907), Imperial Relations (Canadian Club, Toronto, 18 October), and Growth and Responsibility (Canadian Club, Winnipeg, 21 October).

Some of the Canadian Club speeches were collected earlier by his hosts, and are among the rarer of the volumes including a Kipling contribution. Imperial Relations first appeared under the title Problems of Empire in the brown-wrappered paperback “Addresses Delivered Before The Canadian Club of Toronto Season 1907-08” (Toronto, 1908, Livingst Supp. p. 153, Stewart 541), while excerpts from Growth and Responsibility and from his speeches in Vancouver (7 October), Victoria (9 October) and Montreal (24 October) were printed in The Canadian Annual Review of Public Affairs 1907 (Toronto, 1908, Livingston Supp.p. 154, Stewart 542), and the Ottawa speech of 21 October, Canada’s Path to Nationhood, appeared in Ottawa in 1910 in “Addresses Delivered Before The Canadian Club of Ottawa” (and was never collected by Kipling).

While these three Canadian speech collections were known to and described in the bibliographies of Livingston and Stewart, a hitherto unknown first edition of the Winnipeg speech recently surfaced from a bookseller on the internet”. Pictured here is one of only two known copies of “Address by Rudyard Kipling to The Canadian Club Winnipeg 2nd October 1907”, an eight-page pamphlet in stiff white wrappers, tied with a chartreuse silk cord, called simply “Kipling’s Winnipeg Speech” on its front cover, decorated with a colored maple leaf.

Printed by a local engraving company (so local, ‘Winnipeg’ is not repeated in the printer’s address on the title page), it bears no date, but was almost certainly printed as a keepsake promptly following this famous visitor’s delivery of his address. 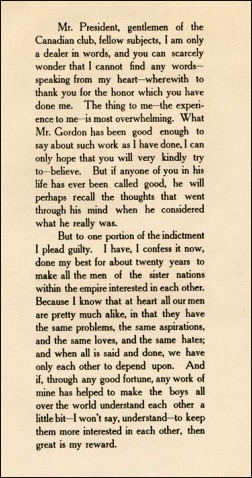 Publication of this edition seems to have promptly followed the speech’s delivery: in a letter of 28 November 1907 (now in the Stewart Kipling Collection at Dalhousie University), Kipling’s wife Carrie thanked Colonel J.B. Mitchell for a copy of the “charmingly got-up speech”, and this copy, with the author’s own handwritten revisions, is now with the Kipling Papers at Sussex University.

Comparison of this original text of the pamphlet (in which Kipling presumably had no editorial hand, since he had left Winnipeg) with that appearing two decades later in A Book of Words shows no significant changes in the text, except punctuation. The peroration as published in 1928 shows the mix of praise and summons which informed his address:

“There is no man, and I want to quote again, ‘that can foresee or set limits to your destiny’. But any man, gentlemen – even I – have the right to remind you, before I sit down, that to whom much has been given, from them much â€“ much – shall be required !”

In the 1907 printing, perhaps reflecting the more sceptical attitude of the reporter or printer, there is no final exclamation point.