One of the apparent puzzles to Kipling collectors who consult both Flora Livingston’s 1927 Bibliography and James McG. Stewart’s 1959 Bibliography is why the first contains a book entitled Fame’s Tribute to Children, published in Chicago in 1892 and identified as being the first edition of the poem “Old Johnny Grundy” (Livingston 87), and the second omits it entirely.

The simple answer is that, in his later years, Kipling denied its authorship, although the poem’s facsimile appearing in the book (see illustration below) was in his calligraphy and patently bore his autograph. The more complicated answer is that, in making the submission to the book editors’ appeal for a poem for children, he appears to have forgotten that he first heard it from his father, John Lockwood Kipling. 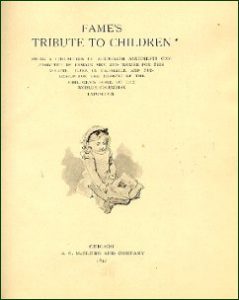 Fame’s Tribute to Children Being a Collection of Autograph Sentiments Contributed by Famous Men and Women for this Volume. Done in Facsimile and Published for the Benefit of the Children’s Home, of the World’s Columbian Exhibition [vignette] Chicago A.C.McClurg and Company 1892.