In his 1935 bibliography Anglo-American First Editions 1826-199, “[d]escribing first editions of English authors whose books were published in America before their publication in England,” I.R. Brussel noted thirteen works by Kipling which could be so described.

The list was headed by Departmental Ditties, Barrack-Room Ballads and Other Verses, published by the United States Book Company in December 1890, in dark purplish red (described by the publisher as “Wine-colored”) bevel-edged cloth boards with gilt lettering and ornamentation and gilt-topped page edges.

The title page describes the publisher as “United States Book Company, successors to John W. Lovell Company”; the first issue of this edition is identified by the gilt-lettered “LOVELL” at the bottom of the spine.

This book is not only the first American edition of Departmental Ditties (originally published in India in 1886 and for the first time in England in a fourth edition in 1890). It is also the first edition anywhere of thirteen Ballads and four Other Verses, almost all of which had appeared in William Ernest Henley’s Edinburgh-based weekly The Scots Observer from February through October 1890.

The new ballads included some of what proved to be the poet’s most famous works, including Danny Deever, ‘Tommy’, ‘Fuzzy-Wuzzy’, The Sons of the Widow (retitled The Widow at Windsor in Methuen’s London edition of 1892 entitled Barrack-Room Ballads and Other Verses), Gunga Din, and Mandalay.

As described in Andrew Lycett’s biography Rudyard Kipling, an international copyright law was by 1890 coming nearer to passage in the United States, and New York City publisher John Lovell “had the novel idea of pre-empting the courts [which would be litigating post-copyright law claims about pre-copyright law piracies] and sending an agent…to London where he could court British authors and encourage them to sign up with a ‘reputable’ American firm such as his own. This would ensure simultaneous publication of their British ‘sheets’, or printed proofs, in the United States, while Lovell, who had been as exploitative as the rest of them, would steal a march on both the pirates and his more legitimate competitors.”

Lovell’s London agent was an American literary entrepreneur from Vermont, Wolcott Balestier, who arrived in England in December 1888. Balestier soon made friendships among English authors, including essayist and critic Edmund Gosse. Gosse later claimed to have introduced Balestier to Kipling, and in June 1890 secured employment for Arthur Waugh (Gosse’s cousin, and father-to-be of Evelyn Waugh) as Balestier’s assistant. Waugh later noted that Kipling ‘”was a more dilatory conquest than usual” for the charming Balestier, who was rebuffed in his request to do an American edition of Kipling’s The Book of the Forty-Five Mornings (which, indeed, was never to appear anywhere).

After Wolcott apparently advised Rudyard on the latter’s fight with Harper & Brothers in the fall of 1890 over their edition of The Courting of Dinah Shadd, Kipling was at last amenable to Lovell’s publishing an ‘authorised’ edition of his works in the United States. 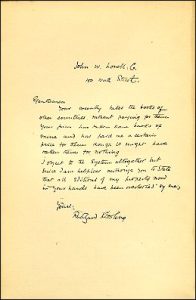 Nevertheless, Kipling’s unabated aggravation with the American pirate publishers resonates even in his letter to Lovell, which appeared in the Lovell edition of Soldiers Three:

Your country takes the books of other countries without paying for them. Your firm has taken some books of mine and has paid me a certain price for them though it might have taken them for nothing. I object to the system altogether but since I am helpless authorize you to state that all editions of my property now in your hands have been overlooked by me. 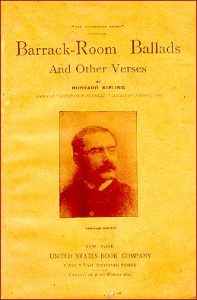 All the Lovell titles in this Handsome Uniform Series sold at $1.25 per cloth-bound volume, or $8.75 for the seven-volume boxed set, but only Departmental Ditties, Barrack-Room Ballads and Other Verses contained material previously uncollected in book form. In 1891 the United States Book Company used the same sheets with a new title page – Barrack-Room Ballads And Other Verses – in the paperback Strathmore Series, which featured Kipling’s portrait on the front cover.

Three interesting inscribed copies are known. The Berg Collection in the New York Public Library holds Edmund Gosse’s copy, with his bookplate and signed by Kipling with the date “9 Aug: 91”.

Four months later, on December 6, Wolcott Balestier died suddenly in Germany of typhoid fever, and Kipling married his sister Caroline on January 18, 1892, at a wedding in London attended only by Rudyard’s cousin Ambrose Poynter, Edmund Gosse and his wife, son and daughter and publisher William Heinemann. Heinemann was Wolcott’s partner in the firm of Heinemann and Balestier, which had been founded to compete with the Tauchnitz firm.

In the Houghton Library at Harvard University is a copy with an autograph letter signed by Carrie Kipling to American book collector Paul Lemperly (undated, but on the Kiplings’ Brattleboro stationery, so circa 1895-96), reading:

Dear Sir: Mr. Kipling wishes me to say in answer to your questions as to first editions of his verses that the edition that you write of was the first one authorized by him in America but there were many others published earlier without his authority. Yours truly, C. Kipling” 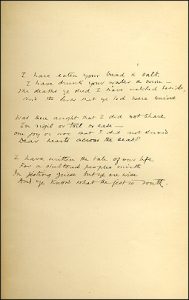 And in an American private collection, one of a set of the Lovell editions owned by the New York artist Anna Benedict Parker and autographed by Kipling on each title page, the copy of this book bears on its flyleaf a holograph of the (untitled) Prelude, beginning “I have eaten your bread and salt”: