Schoolboys B. Medhurst and G. Chinnery, editors of The School Budget of Horsmonden School, near Tonbridge in Kent, wrote to Kipling in March 1898. They enclosed a copy of their fortnightly publication for 14 February of that year, drew his attention to an article entitled “Hints On Schoolboy Etiquette”, and asked for a contribution at their rate of remuneration of 3d. per page. Kipling’s market rate at that time was reportedly a shilling a word.

Kipling’s response from Cape Town dated ‘Easter Monday ’98’, noting that the editors ‘seem to be in possession of all the cheek that is in the least likely to do you any good in this world or the next’, and gave a few more schoolroom strategems for the Budget’s readers. He also required ‘a cheque or postal order for 6d. at your convenience if the contribution should be found to fill more than one page.’

Issue No. 13, which was mimeographed on a cyclo-style, duly included the editors’ introduction to the author’s letter under the heading ‘Saucy and Piquant’, a title reflecting their personal response to Kipling’s letter. 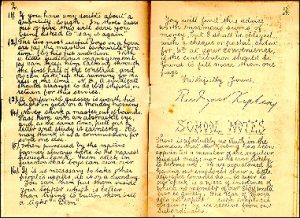 Kipling’s letter itself, as re-transcribed, indeed covered two pages, and his own copy of this issue is now to be found at Bateman’s with an envelope dated May 13, 1898. (Whether his sixpence piecework payment was included is not known.) 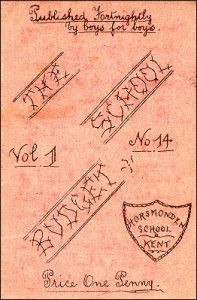 The next issue of The School Budget , No. 14, noted the great demand for what was, in truth, a “Kipling first edition”, with the editors writing that the sale of the Kipling number had compelled them to raise the cover price of ‘the half-dozen unsoiled copies’ remaining to 7/6 each. 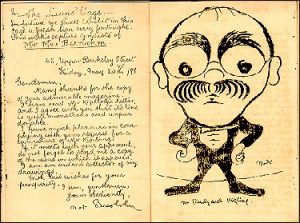 This issue also included a letter from the editors’ fresh literary lion, Max Beerbohm, agreeing that the ‘tone [of Kipling’s letter in the prior issue] is quite monstrous and unpardonable’, and forwarding at their request a caricature of Kipling (perhaps Beerbohm’s earliest such in a series that stretched over four decades) which was reproduced facing the Incomparable Max’s letter.