Throughout his writing life, the work of Rudyard Kipling often first appeared on newspapers and magazines. Many – McClure’s, Saturday Evening Post, and The Century in America, and Cassell’s, Pearson’s, and The Strand in England – were well known in their day, but others were more obscure then, and are now lost to memory. One such in the United States was The Youth’s Companion, a weekly “Illustrated Family Paper”.

The Youth’s Companion was published in Boston, Massachusetts by Perry Mason Company “to stimulate a healthy ambition for high ideals.” Kipling’s article ‘Winning the Victoria Cross’ was published in The Youth’s Companion for 3 June 1897 (and in England, effectively simultaneously as was the business custom of Kipling’s agent A.P. Watt in placing the author’s periodical work, in Windsor Magazine for June 1897). 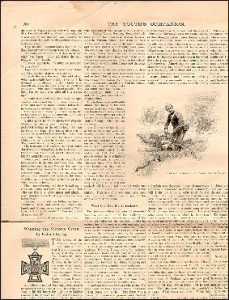 Kipling’s first essay for this periodical was drawn partly from T.E. Toomey’s Heroes of the Victoria Cross (George Newnes, London, 1895), but also from Kipling’s acquaintanceships made while a reporter in India. which allowed him to impart character lessons to his young readers:

“I have never yet come across a V.C. who had not the strictest notions about washing and shaving and keeping himself quiet and decent on his way through the civilized world.”

His article was illustrated with a picture of the little bronze Maltese cross with the crowned lion atop and the inscription, “For Valour”, below, as well as with a drawing of ‘A Brave Surgeon Under Fire.’ 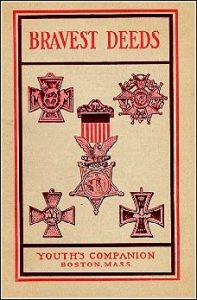 In 1901-02, Perry Mason Company produced a series of paperbacked 64-page booklets called The Companion Library, each containing several stories and articles previously printed in the weekly newspaper, and in this series thus appeared two Kipling first editions: Bravest Deeds (1901) and Fearless In Duty (1902). In keeping with their theme of military heroism, the covers of these little booklets were decorated with illustrations of five medals of heroism, in purple and pink, with the United States Medal of Honor in the center, the Victoria Cross of England in the upper left corner, the Cross of the Legion of Honor of France in the upper right corner, the Cross of St. George of Russia in the lower left corner, and the Iron Cross of Germany in the lower right corner. 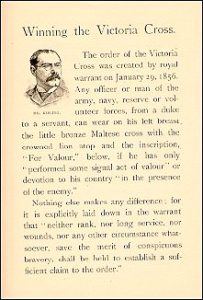 Bravest Deeds (unnumbered in this 1901 issue, but numbered on the title page in later issues) was No. 24 in The Companion Library, and ‘Winning the Victoria Cross’ appeared at pp. 43-52 with an engraved portrait of ‘Mr. Kipling’ after the Elliot & Fry photograph that Kipling had used for his carte-de-visite in the decade before. This booklet is very rare: the only copy in any institutional library in the United States appears to be that in the Kipling collection at the University of Texas (and, unsurprisingly, there is no copy in the Kipling File at the British Library). Harvard librarian Flora Livingston was unaware of it when she completed the first volume of her Kipling bibliography in 1927, and had apparently still never seen one when she mentioned it in her 1938 Supplement (at p. 146). Instead, having no date for its publication, she described (at Supp. p. 145) the 1902 hardback Daring Deeds published by Perry Mason Company as the first book edition of ‘Winning The Victoria Cross’.

This hardback comprised of Nos. 24, 25 and 26 of The Companion Series; this publisher was a re-packager par excellence. In his 1959 Bibliographical Catalogue of Kipling, James McG. Stewart made the same mistake (Stewart 273), compounded by his having a copy of Bravest Deeds with a 1902 title page, causing him to classify it (in Stewart 274) as a mere (second) ‘collected edition’.

Kipling’s second article for The Youth’s Companion, ‘On A Burning Troop Ship’, appeared there on 10 November 1898 (and in England in the Christmas number of Black and White). The Companion Series booklet with this piece, Fearless In Duty, appeared in 1902 as No. 26 of the Series. Like its twin, Fearless in Duty is rare: the only known institutional copies are at Harvard and in the Stewart collection at Dalhousie University in Canada. Kipling himself did not collect these two pieces until his Land and Sea Tales of 1923.

This story of the burning of the Sarah Sands (below) appeared at pp. 3-10, with an illustration of the troops cheering the collapsed forms of the two lieutenants who had braved the flames in the starboard magazine to save the regimental colors.