While visiting British troops at the front during the Boer War, Kipling worked for two weeks as a sub-editor and writer for the British Army newspaper The Friend in Bloemfontein, capital of the Orange Free State.

Many of the poems and fables he wrote for the newspaper were first collected in War’s Brighter Side (1891, London and New York, Livingston 240 and 241, Stewart 249 and 250) by his fellow editor Julian Ralph, an American reporting for London’s Daily Mail.

The book’s American edition, published by Appleton’s, features Kipling’s portrait, flanked by those of A. Conan Doyle and Ralph, on its front cover.

After returning from Bloemfontein to Cape Town in Cape Colony on 3 April 1900, Kipling received a request to write lyrics for a special song to be sung at a benefit concert at Bloemfontein by Florence Fraser – the “Free State nightingale”. The announcement of the event appeared in The Friend for April 16 (later reprinted in War’s Brighter Side). He telegraphed words for the tune of ‘Auld Lang Syne’ (the telegraphic slips were kept by Fraser until her death), and these were printed on an illustrated broadside sold for 1 shilling in accompaniment to the concert’s programme on April 18.

Here, the poem was untitled, and in the bibliographies is known by its first line, “Be welcome to our hearts to-night”. According to the article about the concert appearing the next morning in The Friend for 19 April 1900, “As the air was ‘Auld Lang Syne’, there was no keeping the audience from taking up that fine last verse and having it again and again.”

The Bloemfontein broadside (above, price one shilling) is very rare: the four known institutional collection copies are at Harvard and the Library of Congress (each with a copy of the main concert programme), the University of California at Berkeley, and Stewart’s collection at Dalhousie University. In subsequent newspaper publication (the Daily Mail for 20 April and the New York Herald Tribune for 28 May), the opening line was revised to “We welcome to our hearts to-night, our kinsmen from afar.”

When Kipling first collected the poem in his own book (the Sussex Edition of the collected works in 1939, published in America in 1941 as the Burwash Edition), the author retitled it ‘A New “Auld Lang Syne”‘. The American first edition of this poem (and the first book edition) is even rarer than the Bloemfontein concert broadside, and has indeed only been recently discovered. 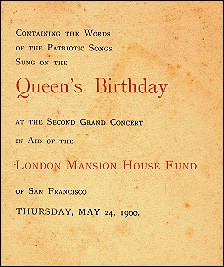 On 24 May 1900 (four days before the poem appeared in the New York Herald Tribune) there occurred in San Francisco a birthday concert for Queen Victoria.

The tan-covered 16-page programme, printed in red and black, was entitled Containing The Words Of The Patriotic Songs Sung On The Queen’s Birthday. 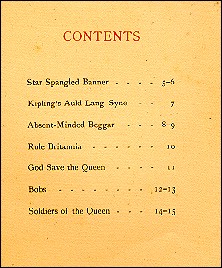 Its contents included three poems of Kipling (and no other poet’s), interspersed among the “patriotic songs” of two nations. 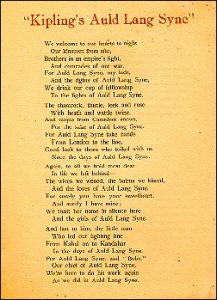 Only five weeks separated the Daily Mail and San Francisco appearances, and how and by whom the text was transmitted from London to California is unknown. This concert programme may also be the first American edition of ‘Bobs’ (perhaps preceding Our “Bobs” [Livingston 95, Stewart 234]). Only one copy of the programme is known, in an American private collection.