First printed in Civil and Military Gazette, April 6th, 1886. The poem appeared in the New York Tribune on July 6th, 1890.

F. A. Underwood, writing about the first edition of Departmental Ditties, and its later enlargement, notes that:

…the volume has a unity which was lost to some extent in the subsequent enlargements. The series nature of the ditties was emphasised by the fact that the heading to “A Code of Morals” originally had: ‘ ‘Tis my nineth/Unmitigated misstatement’ instead of ‘ ‘Tis a most’ as in later editions. (F A Underwood, ‘The Expansion of Departmental Ditties‘, the Kipling Journal 188, December 1973, page 6).

We do not know whether this light-hearted piece was based on a true story, or whether Kipling, intrigued by the possibilities of intercepting heliograph messages, simply made up the incident. The heading suggests the latter, but his readers in Simla or Lahore may have known otherwise. The original heading (‘…‘Tis my nineth…’) implies that most of his verses were his own inventions, but in fact much of their appeal was that they echoed the scandals and rumours of the day.

[Title] The title “A Code of Morals” creates the opportunity for puns in the text that follows. Literally, it may indicate the ethical advice that Jones sends to his wife ‘per heliograph’: in this sense code implies a systematically arranged set of moral laws or rules. However, the heliograph [Line 7] – an apparatus for signalling by reflecting the rays of the sun (see below) – used code in the sense of a series of signs representing letters or numbers.

[Line 4] unmitigated Absolute, without any qualification or exception. 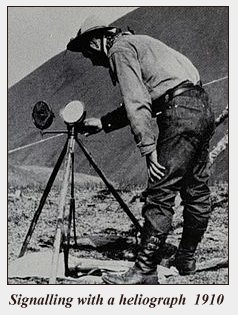 ‘The heliograph is … used to signal messages over distances too great to be covered by signalling with flags. Sunlight is caught on a mirror and flashed to those who wait to receive the message.

One operator wishing to call up and get into conversation with another will make the signal which means ‘are you there’ again and again until he sees the flash of a reply. Only those almost directly in the line of the flash can see it.”

[Line 8] The Code that sets the miles at naught Kipling reiterates here the second meaning of the title to indicate the heliographic language.

[Line 13] scarlet A vivid red colour. This was the colour of an army officer’s ‘mess jacket ‘, worn in the officer’s mess on formal occasions, as it remains in many units today. [A.W.]

[Line 16] Lothario. Lothario was a character in The Fair Penitent, a play by Nicholas Rowe. He was a young nobleman, haughty, gallant, perfidious, and a great seducer of women. The name has come to mean a man with these qualities.

[Line 23] gadzooks A mild or ironic oath. Like many English swear words (for instance ‘bloody’ is a corruption of ‘by Our Lady’) this may be a corruption of ‘God’s hooks’, the nails of the crucifixion of Christ.

[Line 24] Lord Wolseley Garnet Joseph Wolseley (b. 1833), 1st Viscount and Baron Wolseley of Cairo and of Wolseley, a Field Marshal who saw service in battles throughout the world and was instrumental in modernizing the British army. His name was a by-word for military authority.

[Line 36] Trot. Hurry. In this context ‘Trot’ was a specific military command – meaning, “all riders are to make their horses take up a trotting gait.” [A.W.]