The poem was first published in the English Illustrated Magazine, May 1893, as one of the six sub-sectional poems to “The Song of the English” It was collected in The Seven Seas, published simultaneously in London and the USA on 30 October 1896:London, Methuen & Co.
New York, D. Appleton & Co.
The Seven Seas was itself collected in the successive editions of Rudyard Kipling’s Inclusive Verse (1918, 1926, 1932) and Definitive Verse (1940): also in the Sussex Edition (Vol. XXXV) and the Burwash Edition (Vol, XXVIII).

The huge expansion of world trade in the 19th century, the result of the introduction of steam navigation and bigger and faster ships, brought with it a much greater need for sure and accurate navigation. It is not too much of an exaggeration to say that a lot of navigation up to the end of the 18th century tended to be of the ‘go where the ground’s wet’ order. But this was not good enough for the 19th century – one of the major factors was that insurers wanted safe navigation for the ships and cargoes on which they carried the risk.

So there was this enormous expansion of hydrographic activity, charting the seas, largely led by the Royal Navy. Out in the deep ocean, where the ‘ground was wet’ to a depth measured in miles, a position to the nearest ten miles was good enough, and this was easily obtained by astronomical observation – a ‘good’ star sight would be within a mile – and the use of the lead and line to indicate when one was approaching land. But once in pilotage waters, in relatively close proximity to the land, then one needed to know ones position with much greater accuracy.

The placing of lighthouses on conspicuous headlands, the lighthouse themselves being placed in a conspicuous position, and painted so as to be readily visible from seaward (depending on their background), enabled the mariner to ascertain his position within a matter of yards, and by means of other techniques to avoid hazards such as shoals, etc.

In England and Wales, the statutory authority for navigation lights of all sorts is the Corporation of Trinity House, which dates back to 1514, and built its first lighthouse in 1609, while the first recognisable lighthouse off the coasts of Great Britain in 1698 was on the Eddystone Rocks off Plymouth.
So, in hymning the coastwise lights, Kipling was recognised the part they played in ensuring the safe passage of both people and goods, to England’s great profit.

See also “The Disturber of Traffic”, in Many Inventions, about a light-house keeper in East Indian waters, who is driven crazy by loneliness and the relentless passage of the ships to and fro.

skerry a rocky reef in the sea.

ness a promontory or cape

voe a bay or inlet.

These three words are of Nordic origin, and in strict fact, were not very likely to be found being guarded by an English light – ‘skerry’ and ‘voe’ do not occur in the British Isles outside Scottish waters, though ‘ness’ does, for example, Orfordness, in East Anglia.

on the lineless level floors not a very clear phrase: it is assumed that the poet means a flat calm. ‘Floors’ is an unusual word to use of the sea.

Through the yelling Channel tempest when the siren hoots and roars this is poetic licence: one sounds the siren in conditions of fog which is more usually associated with calm, than with a tempest.

By day the dipping house flag and by night the rocket’s trail Lighthouses very often had a signal station run by Lloyds, the insurance agents, and ships would signal their presence by using their house flag, or a rocket at night. In the days before wireless, this was the only way a shipowner would know of the imminent safe arrival of his ship.

The flash that, wheeling inland each individual lighthouse shows its light in its own individual manner, making one, two three or four flashes at a set interval; or shining the whole time, with one to four dark intervals (known as an ‘occulting’ light) at a set interval. The mechanism for making this pattern is that a lens, or lenses, behind the light is made to rotate at such a speed as to create that pattern of flashes. The effect is that the beam sweeps round a 360° arc, sweeping over the countryside behind the lighthouse. 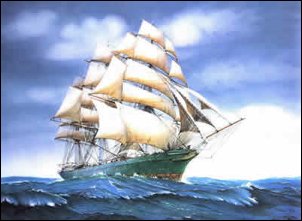 the clippers, wing-and-wing again this is a bit of poetic licence. The tea-clippers had indeed raced home from China, each one striving to reach London first, with the first of the new season’s crop; and there are some marvellous paintings of them surging up the Channel with all their sails set, with a following breeze.

But the opening of the Suez Canal in 1869, put paid to the tea races: a steamer could make a faster passage from such ports as Foochow (the main tea-loading port) than any sailing vessel could do, so the clippers, such ships as Cutty Sark, Taiping, Ariel, Thermopylae had to earn their freight carrying wool from Australia (line 1 ‘that race the Southern wool’).

But wool wasn’t so time sensitive, and though some marvellous passages were made – 90 days from Melbourne to London, east-about round Cape Horn – the days of racing, literally, as had occurred each summer from about 1855 to 1870 were long gone by the 1890s when the poem was written. There were still full-rigged sailing ships, making commercial voyages until 1914, and in much smaller numbers until 1939.

See The Bird of Dawning; the fortunes of the sea by John Masefield, and The Last Grain Race by Eric Newby.

{The rhyming of ‘wool’ and ‘Hull’ is not. perhaps, one of Kiplings best examples of rhyming!)

The white wall-sided warships splendidly alliterative, but inaccurate. Kipling is describing the fleet as he would have seen it in Hong Kong and Simons Town – but not in Home waters where the ships had black hulls.

the guardports of the Morn from the orient The sun rises in the east – rather a high-flown analogy. 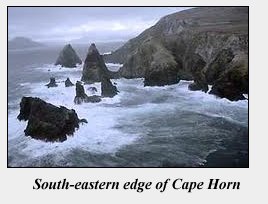 O gipsies of the Horn! Cape Horn, the southern tip of the South American continent was still a major sea lane for traffic from the west coast of the Americas – the Panama Canal did not open until 1914.

Swift shuttles of an Empire’s loom that weave us main to main a very apt metaphor, when one considers how much British trade consisted of woven materials – cotton from the mills of Lancashire, wool (that same wool brought from Melbourne by the last sailing ships) from the mills of Yorkshire going out again as finished cloth. Kipling has the meat of the matter in this verse: the Empire was held together by ships and trade.

by silence shall ye speak the very fact that the ships have arrived safely is testimony to the efficacy of the coastwise lights in the infrastructure of the Empire.