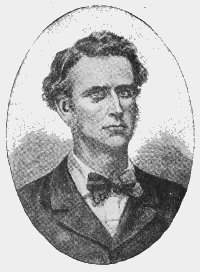 “Adam Lindsay Gordon” (1833-1871) A much loved Australian poet, well versed in the classics and in the works of Browning and Tennyson. He wrote many poems of his own, collected in “Sea Spray and Smoke Drift” and “Bush Ballads and Galloping Rhymes”.

For a time he earned his living as a professional jockey, and made a brief foray into politics as a member of the South Australian House of Assembly. He killed himself at the age of thirty-eight after a troubled and adventurous life.

Gordon’s poem, “The Sick Stock Rider” begins with these lines:

Hold hard, Ned! Lift me down once more, and lay me in the shade.
Old man, you’ve had your work cut out to guide
Both horses, and to hold me in the saddle when I swayed,
All through the hot, slow, sleepy, silent ride…

On the choice of Gordon in this company, Ann Weygandt (p. 130) comments rather scathingly:

… aside from the fact that neither is especially partial to poetic diction, they seem to be very remotely related to each other. Gordon is the commonplace epitomized, in sentiment and execution; no one
could be less inspired. Indeed, Kipling has contrived to
convey this impression in his burlesque on “The Sick Stock-rider.”

Realising that he is dying, the chauffeur considers his ailments, comparing them to the defects in a motor-car.

Probably after Gordon’s “The Sick Stock-Rider”.

[Line 2] the record and the run A private (and perhaps illegal) speed-trial, like the one in France described in “The Bull that Thought” (Debits and Credits).

[Line 4] pinking past redemption sudden loss of power due to a lack of accurate timing between the spark and the position of the piston on the compression stroke, causing premature detonation. There is a characteristic rattle, which will damage the engine if remedial steps are not quickly taken. In early cars the driver had to immediately retard the spark as described in “The Progress of the Spark” above. This cannot be done manually on most modern cars, as there is built in automatic advance and retard control. If there is pinking, the vehicle must go into a garage for adjustment.

[Line 5] strike a mixture The right grade of petrol or the petrol-air mixture produced in the carburettor. A play on words – up to about the 1950s the chemist would make up medicine prescribed by the doctor, and if liquid it was often labelled “The Mixture.”

[Line 6] I cannot set my brakes Alastair Wilson writes: To set the brakes is to adjust the brakes, so that the brake-shoes or pads are just not rubbing on the brake drum or disk when the car is running, but application of the brakes will bring them into contact, and effect, immediately. [A.W.]