One climbs up from Maintenon, with her stone palace and slippery green waterways,
and soon afterwards the two high spires of Chartres Cathedral jut up above the wide,
flat domain of Neustria; above the low dun town that nuzzles its mother-church; above
the whale-back of the exalted nave. Another Lincoln breaks the horizon. 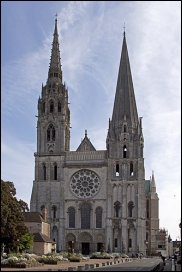 Yet the builders of the Angel Choir of England were in one sense happier than the
men of France who set up, painfully and in perfection, these magnificent Gothic
stones. For ‘le mieux est l’ennemi du bien’, and at Chartres, glass eclipses alike ashlar
and carving, roof and tower and wall. Were it not for the dominating glory of her
windows, the fabric of the Cathedral of Chartres would be reckoned the rival in
nobility of Rheims or Amiens or Rouen, and superior, perhaps, to them for the solemn
restraint that leaves no portal, no arch, no single stone the right to attract attention to
its own grandeur. The splendour of Chartres is vast, even, and unselfish. Yet the
strange fact remains that, putting aside the architect and the expert, no man who has
been inside Chartres Cathedral remembers or cares to remember anything but her
stained glass. She is the outstanding proof of the ultimate triumph of colour over
form…

We arrived in the cathedral in the afternoon with a strong five o’clock sun drawing
westwards a seine of white mackerel clouds that filled the northern and the southern
sky. Going into it was like an entrance — almost an intrusion — into a dark and high
cavern lit by jewels. To see Chartres for the first time is a shock that one remembers till
one’s dying day; and most of those who come are content for a long time to sit in
silence. The magic that assembled these windows no writer has explained, no artist has
imitated… 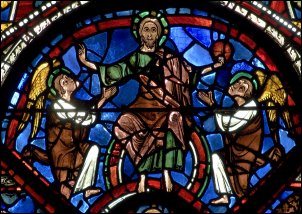 The men who designed and put up these pictures of phosphorescent azure had
faith…More than this, these men, who lived in the fighting days of Christianity,
understood that suggestion was a greater matter than exposition. The last thing that
the master glazier of the thirteenth century thought about was the telling of a tale…In
the presence of this, the uncanniest of all the arts — the art that gets in, as a man once
said, “between me and myself — one can only bow the head and be thankful to those
men of old who understood that illumination and enlightenment come forth rather
from mysticism than from logic…

[Of certain windows at Le Mans,] that to the east illustrates one of the infallible tests
of ancient glass. Despite the imaginations of poets and others — Keats is a notorious
offender — old glass throws no colour. It keeps the light interplaying within its own
thickness, and therein lies the secret of its strength. This very old window casts but a
greyish patch upon the floor of the cathedral where once its colours fell; even the
shadow of the leading is now lost…

If a man wishes to have his soul swept away in a torrent of intangible devotion; if he
wishes humbly to recognise that the Dark Ages had secrets that modern days will never recover, let him go to Chartres…and there in the nave of the cathedral worship the Maker of an art that has no rival, if it be true that the moving of a man’s soul is the end and the test of all the greater craftsmanship of this world.