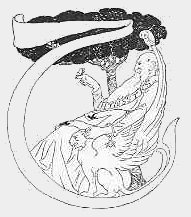 [Page 199, initial] Shows Solomon wearing a collar lettered H T W S S T K S and the apron of an installed Master, both of them being masonic references. The letters refer to the Mark Mason’s Song which begins,‘Hiram, the Widow’s Son, sent to King Solomon the Great Key Stone.’

The eight letters are well-known in Scottish Freemasonry, and Kipling was an honorary member of a Scots Lodge and also several others. From the bracelet hangs the masonic emblem of the square and compasses. Solomon’s chair is part of “The Ceremony of Installation for the Master and Officers of a Masonic Lodge” (The Textbook of Freemasonry (London, Reeves & Turner, 1874), 193). The signature RK is at the foot of the tree.

[Page 199, line 15] Lapwing who found the water See the Koran, Surah 27. Arab historians say that Solomon, having completed the Temple, went on pilgrimage to Mecca – travelling by flying carpet – and on the journey, wishing to perform ablutions, sent for the lapwing, a bird whose business it was to find water, which by its special sagacity it did and marked the place by digging with its bill, the water afterwards being drawn from underground by devils.
Hoopoe This story is not in either the Koran or Mirza Mirkhwand [Mirza Mirkhond of Herat), Rauzat-uz-Safa (The Garden of Purity), trans. Rehatsek (London, Oriental Translation Fund, 1892].

[Page 199, line 17] Glass Pavement Also in the Koran, Surah 27. Solomon’s palace included a floor or pavement of transparent glass laid over running water, in which fish were swimming. Fronting this pavement was the royal throne, on which Solomon sat to receive the Queen of Sheba (Balkis).

[Page 199, line 18] Ruby with the Crooked Hole In Mirza Mirkhwand, part I, vol. 2, pp. 87-9, Balkis sends Solomon gifts before their first meeting. Among these is a ruby in a casket; Solomon ‘ordered a demon to bore it through with a diamond.’

[Page 199, line 23] what the birds said The Koran, Surah 27, says that Solomon understood the language of birds. He also holds a conversation with an ant.

[Page 200, line 12] Afrits and Djinns In Arab mythology, afrits and djinns are demons which can assume the forms of serpents, dogs, cats, monsters or even human beings. The evil ones are ugly but the good ones exquisitely beautiful. Afrits are the second most powerful of the five classes of djinn.

[Page 200, line 17] Azrael In Arab legend, Azrael is the angel that watches over the dying and takes the soul from the body. He is the angel of death and will be the last to die; he will do so at the second trump of the Archangel. 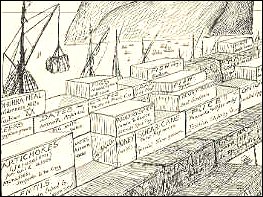 [Page 203, illustration] ORG annotates the markings on the cases of food (right) as follows:

Dhurra meal This package also bears a Masonic emblem, the six-pointed star known as “The Star of David.” D[h]urra is a type of … cereal grass (Sorghum vulgare); the grain made into bread froms an important article of diet. It originally came from Africa, where it is usually known as Durra.

The Tadmor mentioned in I Kings 9,18, is Tamar, in Judah, to the south-west of the Dead Sea. There was another Tadmor in Syria, close to the boundary of Solomon’s dominions.
Sidon Or Zidon, a seaport of the land of the Zidoneans, west of Mount Lebanon.

Heshbon To the east of the Plain of Jordan, famed for its fishpools. ‘Thine eyes are like the fishpools of Heshbon’ (Song of Solomon, 7, 4).
Philip Holberton points out that in “An Unsavoury Interlude” in Stalky & Co. (p. 92) , M’Turk declaims of King: “‘And he washed the fags private et seriatim. In the fish pools of Heshbon washed he them, with an apron about his loins.’

Hamath The land of, in Syria, north of Mount Lebanon.

Arphad Or Arvad, an island off the coast of Hamath.

Bushire the modern Bushire is a port on the Persian Gulf.

Tyre The companion port of Sidon, about 30 miles south of it.

Artichokes (Jerusalem) This kind, as distinct from globe artichokes (to which it has no relation) is a kind of ill-shaped potato, but not nearly so rich in carbohydrates (starch) [the globe artichoke is the thistle-like bud of the plant cynara acolymus; the Jerusalem artichoke is a tuber]. The phrase ‘for wild asses’ seems to be an obscure joke, unless it refers to the ill-success in the United States of growing it for stock-feed.

Sabi Possibly a reference to Seba in the land of Cush (Ethiopia).

Assuan The modern Asswan is on the River Nile (First Cataract).

Javan .. Gadire .. Punt The juxtaposition of these three is surely no coincidence. Cf. “Poseidon’s Law” (“The Bonds of Discipline” in Traffics and Discoveries), last verse:

From Punt returned, from Phormio’s Fleet, from Javan and Gadire…

Javan is the ancient Hebrew name for Greece.

Gadire or ‘Gades’. The modern name is Cadiz, the port in the far south west of Spain.

Punt is identified with Puoni, the ancient land of incense on the Somali coast. Queen Hatshepsut’s great expedition by water in search of incense trees is commemorated in the decorations of her temple at Deir al Bahri [Egypt].

Locust beans are carob beans, grown all over the Mediterranean littoral. Kipling’s word ‘carobean’ is clearly a pun in its assonance with “Caribbean.”

Honey (wild) Lion Brand Here, doubtless, is a playful reference to Samson’s riddle in Judges 14, 14: “Out of the eater came forth meat. And out of the strong came forth sweetness,” the wild bees having made their honey-comb in the carcase of a dead lion. Cf. also his own poem “The Bees and the Flies” [following “The Mother Hive” in Actions and Reactions].

Tarshish A seaport in the land of Cush (Ethiopia). Not to be confused with Tarsus, which was in Cilicia, now Turkey.

Hay The bales of hay are all consigned from the Lower Nile by Ho-Tep, exporter, as to whom there is no available information. But Amenhotep was the name of four Pharaohs of the XVIIIth Dynasty.

At the bottom right-hand of the picture can be seen a very small Ark within an “A”= R.K.

[Page 213, illustration] The Djinns in the picture resemble the one shown in E. W. Lane (ed. E.S. Poole), illustrated from engravings by William Harvey, The thousand and one Nights, commonly called, in England, The Arabian Nights Entertainment (London, Chatto and Windus, 1883) vol. iii, p. 419. It is described on the previous page as ‘an Efreet of the flying ’Jinn.’ Lane’s Arabian Nights was a cult book in Kipling’s mother’s family, read to him by his Aunt Georgie Burne-Jones (see Something of Myself p. 12). In his study there is a set of the 6 volume edition of 1896.

[Page 215, line 27] Zinn The wilderness of Zin, in Judah in the vicinity of Bethlehem, is mentioned several times in the Old Testament.
Zimbabwe The ruins of an ancient city in Mashonaland. The modern country is named after them; in Kipling’s time it was called Southern Rhodesia.

[Page 219, the poem] ORG points out that to call Solomon ‘Asia’s lord’ is an exaggeration, since his kingdom, according to Biblical maps, was never more than 150 miles east of the Mediterranean. [Philip Holberton confirms: ‘Solomon reigned over all kingdoms from the river unto the land of the Philistines, and unto the border of Egypt’ (1 Kings 4.21). “The river” (the Euphrates) is about 150 miles from the Mediterranean at its nearest point.]