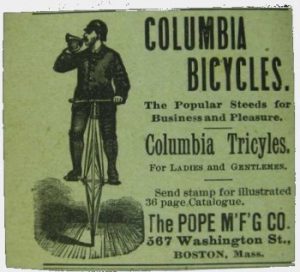 This poem was published in the New York World Sunday Magazine on 26 April 1896. It was not later collected by Kipling, but is to be found in Pinney (p. 2034).

Hans Breitmann is the hero of The Breitmann Ballads (1871) by C.G. Leland (1824-1903). Written in a combination of broken English and German, they record the experiences of a German immigrant to the United States. Kipling knew and liked them, though this seems to be one of only two published parodies. He used verses in the same style as the chapter headings for ‘With the Main Guard‘ (Soldiers Three) and ‘The Incarnation of Krishna Mulvaney‘ (Life’s Handicap). 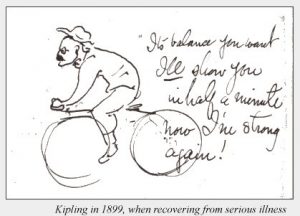 He was never very well co-ordinated physically, though in Simla he had made himself a creditable waltzer on the dance-floor.

In his fateful meeting with Beatty Balestier in the woods below Naulaka on May 6th 1896, the episode that led to the departure of the Kiplings from America, he had fallen off his bicycle when Beatty and his team of horses came furiously round the corner.

Columbia a make of bicycle.