First published in the National Observer for 27 December 1890. ORG lists it as as
Verse No. 484, and notes that it is a satire on “A Collection of Rabelaisian Pictures” published some ten days before, and consisting of nine verses of three lines, each headed “County of London Sessions”. Most of the Barrack-Room Ballads first appeared in this magazine.

The poem has not been collected in its original form, because the first five verses and two lines of the sixth are repeated (with variations in verses 1 and 3) in his 1892 “Dedication” to Wolcott Balestier from Barrack-Room Ballads. See the text of “The Blind Bug”, and our notes on  “Dedication”. 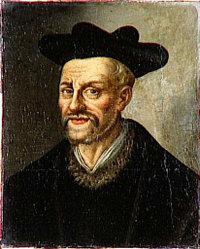 [Verse 6] the Curate of Meudon Francois Rabelais (c. 1494-1553), French writer, doctor, humanist, monk and Greek scholar. Since his lifetime he has been celebrated as a writer of satirical fantasy, full of grotesque bawdy jokes and songs. His best known work is Gargantua and Pantagruel.
Chambers Biographical Dictionary notes:

The riotous licence of his mirth has made Rabelais as many enemies as his wisdom has made him friends, yet his works remain the most astonishing treasury of wit, wisdom, commonsense and satire that the world has ever seen.

Kipling greatly relished Rabelais, and writes, probably of him, in his parody of Milton in “When the Journey was intended to the City” in “The Muse among the Motors”:

When that with meat and drink they had fulfilled
Not temperately but like him conceived
In monstrous jest at Meudon, whose regale
Stands for exemplar of Gargantuan greed,
In his own name supreme, they issued forth..

Because of “the riotous license of (Rabelais’) mirth”, the adjective ‘Rabelaisian’ has come to mean ‘coarse’ or ‘indecent.’ Kipling uses it to describe Apis in “The Bull that Thought” (Debits and Credits, p. 224, line 18):

With his truculence was mingled always – owing to the shortness of his tail – a certain Rabelaisian abandon, especially when viewed from the rear.

[Verse 7] Clerk in the time of Rabelais someone in Holy Orders.

Sorbonne Originally the theological college of the University of Paris. It condemned Rabelais as. ‘a filthy priest’ for the indecency of his writings’. (See also Kipling’s story “The First Assault upon the Sorbonne”).

[Verse 8] The bug cannot think for itself and must be told by others what is right and wrong.

catch chorus. The bug believes it will go to Hell if it listens to a rude song.