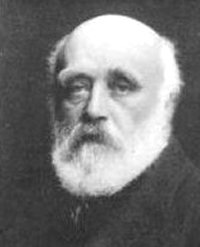 J Lockwood Kipling, Rudyard’s father, published Beast and Man in India in 1891. He was a talented artist, designer, and teacher, with a strong interest in, and knowledge of, Indian art and crafts. He was also an experienced writer. At that time he had been in India for over twenty-five years, and was the Director of the Mayo School of Art in Lahore, and Curator of the Lahore Museum.

A miscellany gathered from wide observation and wider reading, packed with legend, folk-lore, anecdotes from the Indian classics, descriptions of contrivances, utensils and costumes, and sketches by the author in pen-and-ink. The whimsical and the technical, the learned and the popular, the theoretical and the practical are heaped together on every page.

The book is a standing record of the mutual stimulus exerted between Lockwood and his son. The father quotes many of his son’s verses. In countless instances the father’s anecdotes and allusions reveal the son’s debt to his father’s omniscience. Here you may find Chil the kite and Tabaqui the jackal, the method of catching crows by a decoy, the nursery song about the wild plums in the jungle, the behaviour of snake and mongoose about the house, the habits of battery-mules, the legend of a place where elephants dance, the story of Moti Guj, mutineer, the story of Ganesa and the money-lender, the customs of the bandar-log.

Lockwood was an accomplished draughtsman, and most of the illustrations below are from the book. As well as quoting Rudyard’s verses (see the notes below) Lockwood also used two long extracts from Rudyard’s prose writings.In Chapter 8, “Of Horses and Mules” he inserts Kipling’s account of his tour of the stables of the Maharajah of Jodhpur, from Chapter 14 of Letters of Marque, pages 171 –180.

In order to give an accurate picture of what takes place at an Indian beast fight to-day, of the slip-shod arrangements and the quaint way in which folk and animals are mingled together, I quote a description of one of these entertainments given at the installation of His Highness the Maharaja of Jammu and Kashmir, done from the life by my son for the Lahore paper in 1886.

Notes on the verses Rudyard wrote 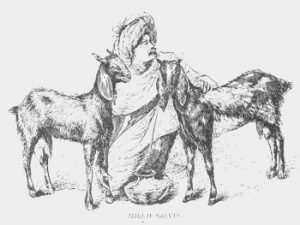 [Verse 1] This describes the sacrifice of a goat as a substitute for human sacrifice. In the chapter that follows this heading, Lockwood Kipling writes:

For many years a goat has been sacrificed daily at a temple within the precincts of the old palace at Amber, the former capital of the Jeypore state in Rajputana; and here, as in some other places, the tradition is that the goat is a substitute for a human sacrifice once regularly offered.

As collected (though not in the original), Child (l.1) and Babe (l.3) are capitalised. This suggests that Kipling had some specific sect or temple in mind. (Comments from readers will be welcomed: Ed.)

[Verse 3] This describes how goats are still sacrificed to atone for mankind. Cf. “Without Benefit of Clergy”: when Holden’s son is born, the old watchman of his house brings him two goats to sacrifice, saying “Never life came into the world but life was paid for it.” (Life’s Handicap, p.156 l. 31) 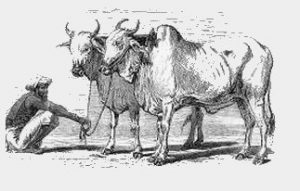 The cultivator is the backbone of the country, and depends on the ox for working the land.

Rudyard contributed this  poem for Chapter vi: “Of Cows and Oxen”.

He also wrote a heading – “The Beasts are very wise” to Chapter xiii: “Of Animal Calls”;  The last line of this verse runs: “Nay, ‘twas the whip that spoke”: In the chapter “Of Elephants” Lockwood quotes a saying: “The elephant’s god is his goad.”

See also the Interlude in “The Masque of Plenty” and “What the People Said“. 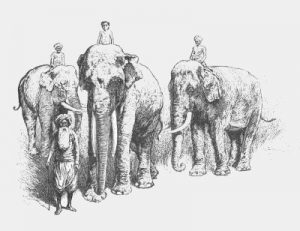 [Verse 2] Where the oxen pant elephants will not go near gunfire, so a team of oxen wait to take over to drag the guns nearer to the front. Cf. “Her Majesty’s Servants” The Jungle Book p.260. A pair of gun-bullocks speak:

Of Pigs and Buffaloes

Pigs and buffaloes are only half-tame and are not allowed into the villages. Bulls and boars are very dangerous when angered.

Mowgli used the buffalo bulls to kill Shere Khan in “Tiger! Tiger!” (The Jungle Book p. 87 onward). In Greek myth all the noblest heroes had to come together to hunt and kill the terrible boar that was laying waste the land of Calydon.

See also this article by Rudyard on a ‘Best Fight’.

Two Chapter Headings were not collected, though duly acknowledged with the initials RK. “Of Reptiles” and “Of Animals and the Supernatural”. 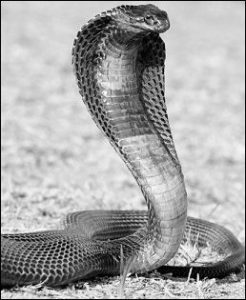 That for “Of Reptiles” is very brief:

” And death is in the garden awaiting till we pass,
For the krait is in the drain-pipe,
The cobra in the grass. “
(Anglo-Indian Nursery Rhymes)

The Krait (Genus Bungarus) and the Cobra (Genus Naja) are two of the deadliest snakes in India. Cf. “Rikki-Tikki-Tavi”:

Something flinched a little in the dust, and a tiny voice said: ’Be careful. I am death!’. It was Karait, the dusty brown snakeling that lies for choice on the dusty earth; and his bite is as dangerous as the cobra’s. But he is so small that nobody thinks of him, and so he does the more harm to people.
(The Jungle Book p.177)

Of Animals and the Supernatural

The heading for the chapter “Of Animals and the Supernatural” comes from “The Seven Nights of Creation” published in the Calcutta Review in 1886 but not collected for 100 years, until Early Verse by Rudyard Kipling (Ed. Rutherford) in 1986:

O Hassan ! Saving Allah, there is none
More strong than Eblis. Foul marsh lights he made
To wander and perplex us – errant stars,
Red, devil-ridden meteors bringing plague –
Deserts of restless sand-drifts – ice-bound seas
Wherein is neither life nor power to live –
Bound Devils to the snow-capped peaks (These vex
Earth with their struggles) – lashed undying fire
About the forehead of the tortured hills,
And filled the belly of the Deep with life
Unnameable and awful at his will –
Sent forth his birds, the owl, the kite, the crow –
Gray wolves that haunt our village gate at dusk
Made he his horses, and his councillor
The hooded snake – in darkness wove the grass
That kills our cattle, made the flowers that suck
Man’s life like dew-drops – evil seeds and shrubs
That turn the sons of Adam into beasts
Whom Eblis snatches from the sword-wide Bridge.

The thing that stung thee and its kind, his hands
Fashioned in mockery and bitter hate,
Dread beasts by land and water, all are his.
Each bears the baser likeness of God’s work,
Distorted, as the shadow of thy face
In water troubled by the breeze.

This poem is dualistic. Eblis (the Muslim equivalent of the Christian ‘Satan’) is almost the equal of Allah, with similar powers of creation. He has made everything that is harmful to mankind.

[line 19] the sword-wide bridge Al Sirat, the bridge, no wider than the edge of a sword, over which those seeking to enter the Islamic heaven must pass. (Note from Early Verse)

[line 20] The thing that stung thee in the complete poem, Hassan has been stung by a scorpion

Three other Headings are from poems that have been collected elsewhere in their own right. 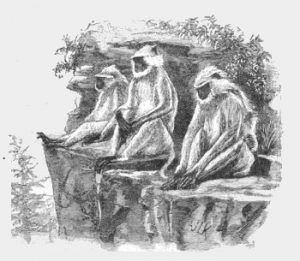 “Of Monkeys” uses Verse 6 from the poem “Divided Destinies”

His hide was very mangy, and his face was very red,
And ever and anon he scratched with energy his head.
His manners were not always nice, but how my spirit cried
To be an artless Bandar loose upon the mountain side ! 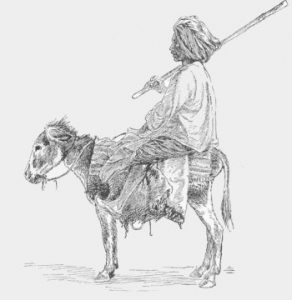 “Of Asses” uses the whole of “The Legends of Evil” part II, which tells how Noah lost his temper with the donkey and unwittingly invited the Devil into the Ark (see Notes in this Guide).

In Beast and Man Lockwood tells the Indian version of the story, and comments:

If there is a moral in this absurdity, it is that when holy men lose their tempers they open the door to sin; but in some topsy-turvy way, possible only to Oriental thought, the obloquy of the anecdote falls on the innocent ass. 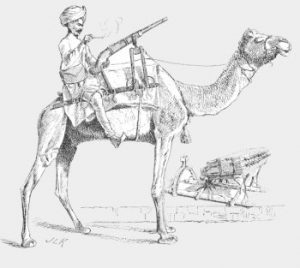 “Of Camels” uses as heading the first 16 lines of “The Ballad of the King’s Jest”. See also our notes on the poem.

And in the body of the chapter, when Lockwood describes the behaviour of camels in Army service he inserts the whole of Rudyard’s poem “Oonts”, knowing that it could not be improved upon.

Lockwood also borrows Verse 2 of “Screw-Guns” to close Chapter 8, “Of Horses and Mules”:

They send us along where the roads are, but mostly we goes where they ain’t;
We’d climb up the side of a sign -board an’ trust to the stick o’ the paint;
We’ve chivied the Naga an’ Looshai, we’ve give the Afreedee man fits,
For we fancies ourselves at two thousand, we guns that are built in two bits.