A short question-and-answer ballad in what has been called “mockney”, an imitation of the slang of the East End of London which irritated some of the critics who thought it “vulgar”. Others regarded it as harmless fun reflecting the sayings and doings of uneducated but entertaining and shrewd people. It is in the tradition of many Music Hall songs, before and after Kipling: ‘Has anybody here seen Kelly…’

There are three other question and answer ballads from the barrak-room:  ‘Danny Deever‘, ‘Soldier, Soldier’, and ‘The Widow’s Party‘.

See KJ 006, 078 and 217. See also, for a more dangerous case of jealousy, “On Greenhow Hill” (Life’s Handicap) p. 91, in which Learoyd thinks of dropping his smooth-tongued rival down a mine-shaft. Also Brian Mattinson’s list for musical settings.

Gawd-bless-’im God bless him – the speaker is sarcastic. 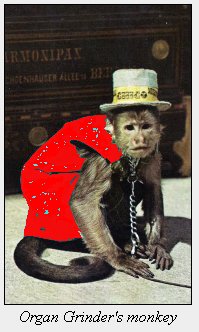 Organ-grinder’s monkey a street musician often had a tethered monkey in a red jacket as part of the entertainment – see “The Puzzler” (Actions and Reactions), “The Village that Voted the Earth was Flat” (A Diversity of Creatures) and “Something of Myself” Chapter VI p. 150. Of his fund-raising poem “The Absent-Minded Beggar” Kipling writes: ‘Sir Arthur Sullivan wedded the words to a tune guaranteed to pull teeth out of barrel-organs.’

grease it was fashionable for men to dress their hair with Macassar oil, a blend of coco-nut oil and other ingredients which was liable to soil the backs of chairs where the head rested. This was prevented by the “anti-Macassar”, a washable strip of cloth secured to the chair.

open ‘is cheek to his chin-strap buckle punch him in the face so as to cause a wound. The chin-strap, as its name implies, goes under the chin to hold the head-dress in place although some wore it just under the lower lip. That part of the face covered by the strap did not get sunburnt, leaving white lines on the cheeks. See “A Conference of the Powers” (Many Inventions).