This is a poem of wanderlust, looking back to the freedom of the seas on “The Long Trail” written just over a year earlier. It describes the work aboard a square-rigged sailing-ship as she manoeuvres out of harbour at the start of a long voyage. As always, Kipling has absorbed the technical terms involved and employs them appropriately. He makes it possible to follow every move.

For Kipling’s continuing delight in technicalities, see also Captains Courageous Chapter III, (1895), and the opening passage of “The Manner of Men” (1930).

Walk her round The sailors are walking round the capstan as they push on the capstan bars (like the spokes of a wheel), hauling in the anchor cable. (see above)

snatch her over give a sudden extra effort so that the pawl –the ratchet on the capstan – drops into place and stops the cable running out again. Then the sailors can leave the capstan for the moment and set the sails.

Loose all sail, and brace your yards aback and full the wind is blowing down the harbour. The ship, anchored by the bow, is facing into it like a weathervane. So the sails are “aback” the wind is blowing onto the front of them. The yards (the spars that carry the sails) are swung as far as possible, ready to catch the wind as soon as the ship can be turned.

This Editor is glad have Kipling’s own confirmation of his reading of the position:

The ship is getting out of harbour – head to wind.

Ready jib to pay her off the foremost sail on the ship is ready to turn the bows as soon as the anchor is raised.

You must take me while you may a sailing-ship must leave as soon as the wind is favourable. 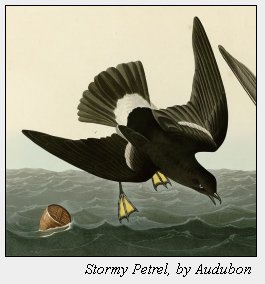 she feeds her chicks “Mother Carey’s chickens” is a sailor’s name for stormy petrels.

break her out pull the anchor free of the seabed

starboard the right hand side of a ship when facing the bows the left hand side is the port side – see line 3 below.

bower an anchor stowed at the bow

apeak the Oxford English Dictionary quotes Admiral Smyth, Sailor’s Word-book of 1867: ‘The anchor is apeek (sic) when the cable has been sufficiently hove in to bring the ship over it.’

clear the anchor is out of the water

port she casts the ship turns to the left under the influence of the wind against the jib (see Verse 1 line 4). Here again Kipling displays his mastery of technicalities: the rule was to cast away from the anchor, which (see line 2) is the starboard bower, and the ship correctly casts to port.

harbour-mud beneath her foot the harbour is so shallow that as the ship turns, her forefoot (the front of her keel) stirs up the mud.

the last o’ bottom they do not expect to drop anchor again for a year.

ballast heavy material put on board to keep the ship stable as she is unladen – cargo-free.

bitt a post on the ship’s deck for attaching a cable (usually in pairs).

we’ll pay you with the foresheet we won’t pay you at all because we are off to sea and you can’t catch us.

When Joshua Slocum set off on his solo voyage round the world in 1895 he records: ‘The Spray, in gathering headway, scratched the paint off an old, fine-weather craft in the fairway. ‘Who’ll pay for that?’ growled the painters. ‘I will,’ said I. ‘With the mainsheet’, echoed the captain of the Bluebird, close by, which was his way of saying I was off.’ Sailing Alone Around the World, Ch 2

[Verse 5] Now that the ship has turned and is heading out of harbour, the crew have time to stow the anchor securely. This verse describes the process in detail.

Tally on take hold of a rope.

Aft and walk away with her! Walk towards the stern of the ship while you haul on the rope.

Handsome cf. “His Gift” “William knew from his uncle that ‘handsomely’ meant slowly and with care.” Land and Sea Tales p.87 l.17.

cathead a beam projecting over the bow for securing the ring of the anchor. (right) It was so called because it was traditionally decorated with a lion’s head mask.

fall the free end of a rope to which power is applied.

stop make fast. The anchor has been drawn up to the cathead with a block or pulley. Now it is tied and the block can be released.

seize make fast with a number of turns of rope.

fish draw the flukes of an anchor up to the gunwale (OED). The ring of the anchor is secure, now the flukes at the other end must be raised and tied up.

davit a small crane to handle the weight of the anchor.

fluke the triangular plate on the end of the arm of an anchor.

inboard haul pull the fluke onto the ship so that it can be tied up.

the Channel the English Channel between England and France.

gaskets ropes that furl (gather) the sails against the yards in harbour. The remaining sails are now being set.

blowing up the wind is getting stronger.

dropping light on light leaving beacons and lighthouses behind her one after the other as she sails down the Channel.

Wheel, full and by instruction to the helmsman to keep the sails filled and drawing well.

she’ll smell her road alone she will hardly need steering to keep on her course.

Brest port city in the north-west of France.

all she’ll stand carrying as much sail as is safe in the wind that is blowing.

Ushant (in French Ouessant) island off the extreme west of France, marking the Western end of the English Channel: ‘From Ushant to Scilly is thirty-five leagues.’ (Spanish Ladies).

Whirling like a windmill the rotating beams from the lighthouse on Ushant show up on the thin cloud – scud – downwind (to lee).

last flicker goes the lighthouse drops out of sight below the horizon.