The story was first published in McClure’s Magazine in August 1898, and subsequently collected in Stalky & Co. (1899) It was later included in The Complete Stalky & Co.

Looking for a place to read and smoke their pipes undisturbed, Stalky Turkey and Beetle explore the much protected estate of a local landowner, and find a splendid secret sanctuary on the edge of the sea cliffs.

On the way back through the gorse, they narrowly avoid being shot by a keeper who has fired his gun at a fox. This infuriates Turkey, himself the son of a Irish landowner, who sees shooting foxes as a totally unacceptable act. He insists on seeking out the owner, Colonel Dabney, to tell him so. They find him putting golf balls on the lawn. 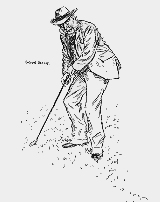 Turkey makes his point, which is accepted, and the boys are welcomed, and given the freedom of the estate. Two housemasters and the school Sergeant, desperate to catch the three, follow them one day and run into Colonel Dabney, who tells them off for trespass in no uncertain terms. Stalky & Co. overhear the whole exchange, and are delighted to see their pursuers humiliated. It has been a classic piece of ‘stalkiness’.